The plan will create new tax credits worth $100 billion for the construction of 20,000 megawatts of high-voltage transmission lines, a major hurdle in the expansion of renewable energy.

And it includes a 10-year extension of wind, solar and battery tax credits, which are currently set to expire in coming years. That’s the carrot.

There’s a stick, too: a provision that would require every state to generate all of its electricity by 2035 from fuels that do not produce any of the carbon emissions linked to global climate change.

The Evergreen Collaborative, an environmental group, calculated in a recent study that the U.S. would need to install 40 to 100 gigawatts of new wind and solar capacity every year to meet a goal of zero-carbon electricity by 2035. Last year saw 33 gigawatts installed — the most the U.S. has ever deployed in a single year.

Many states are positioned to generate significant amounts of solar and on- or off-shore wind. And 13 states have already set a goal of obtaining all of their electricity from zero-carbon sources by at least 2050.

Will the red state-blue state divide derail the Biden plan? Sure, states that have large fossil fuel industries will probably kick and scream. But red states are already four of the 10 states that generate the highest share of their electricity from all carbon-free sources.

Five red states — Texas, Oklahoma, Iowa, Kansas and North Dakota — rank among the top 10 in the amount of electricity produced from wind and solar power. That’s mostly due to massive wind farms.

Wind power will get special attention in the Biden plan. The president wants to jumpstart offshore wind energy projects, installing hundreds of turbines off of both coasts, 30 gigawatts worth, by 2030. That’s enough to power 10 million homes.

Clean energy is one priority; the tens of thousands of jobs offshore wind will bring with it is another. The White House figures the resulting offshore boom could support 44,000 union jobs. Look, the U.S. was going to build a lot more wind and solar anyway. That’s because both of these green energy sources are now cheaper than coal.

Even without Biden’s green energy plan, the shift to alternatives is inevitable. The U.S. Energy Information Administration figures that renewables will be a bigger and bigger part of our energy picture going forward. 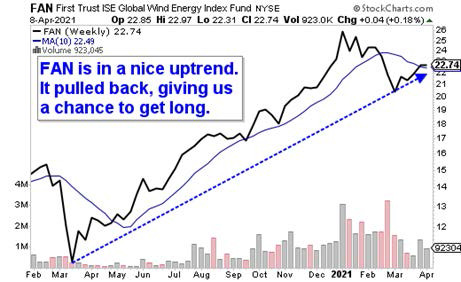 Most of these companies are based overseas, with only tracking stocks traded on the over-the-counter market. That makes them harder for U.S. investors to buy individually. But you can scoop them all up with FAN.

And foreign corporations stand to do very well in the Biden green energy boom. They’re already lining up to build offshore wind turbines from New England to California. About 13.7% of FAN’s holdings have primary listings in the U.S., 15.9% are in Denmark and 15.7% are in Canada.

FAN also has a dividend yield. It’s not big, recently 0.91%. But it is projected to grow 35.5% per year for the next three years. And we like dividend growers. You can see that FAN is already in a nice uptrend. It spent the early part of this year consolidating gains. Now, it seems ready to move higher. 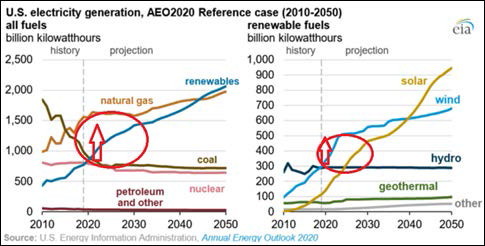 Biden’s green energy plan is just a plan. It has to get through the U.S. Senate. But, if Democrats can use reconciliation for the infrastructure bill, and that seems to be the case now, the door is open to a greener future — both for the environment and your portfolio. Buy First Trust Global Wind Energy ETF at the market. Then, place a 30% active stop.