ETFs for a "WealthWave" in Cannabis

Cannabis stocks have fallen out of favor. In fact, the selling since March has been relentless. This is happening even though fundamentals are looking better than ever, observes Sean Brodrick, growth stock specialist and editor of WealthWave.

The global cannabis market is predicted to grow to $66 billion by 2025 with a 24% compound annual growth rate, and retailers are reporting excellent earnings. The cannabis industry is being overlooked due to slower-than-expected legalization efforts.

Don’t write off the promise of legal pot just because some states are moving at the snail speed of government. Here are my three favorite reasons why the negative sentiment should change — and three ETFs that are waiting for that inevitable day.

Demand for cannabis has surged over the last several years. The pandemic pushed sales into overdrive after marijuana was labeled an “essential” good. Last year, total sales in the U.S. soared 45% despite pandemic-related challenges! This year, sales are forecast to increase another 23% to $21.7 billion.

Effective scaling is helping many operators become profitable, and many of the ones that aren’t yet are expected to turn a profit very soon. The chart below shows just U.S. sales, which are projected to climb over the next several years: 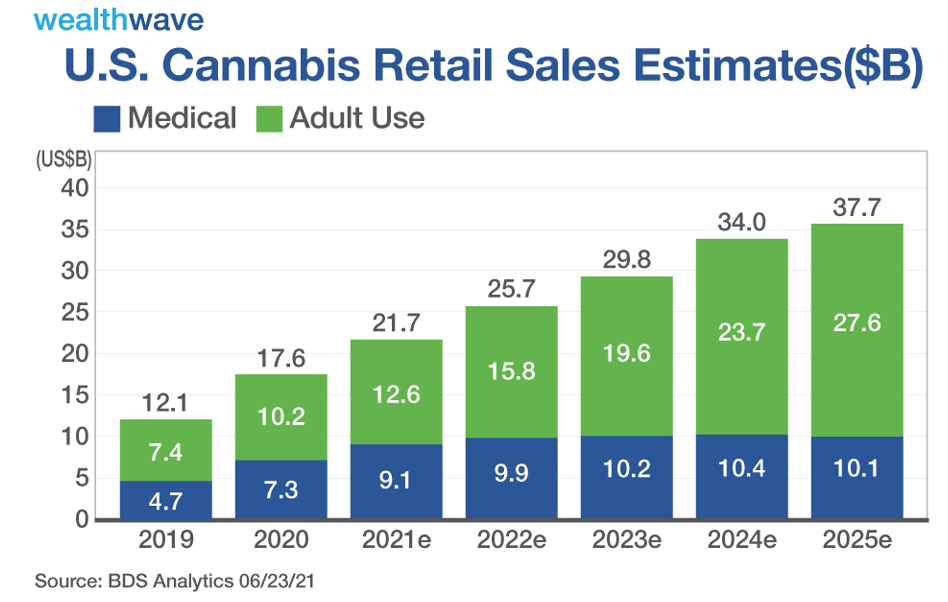 The initiative to federally legalize marijuana is supported by the people, corporations and the Democratic majority in government. It’s just a matter of time before the industry cuts through the red tape.

Americans want legal marijuana: Gallup’s poll from the end of 2020 showed that 68% of the American population thinks it should be legalized — double the support that it had two decades ago!

Large corporations — like Amazon (AMZN) — are throwing their weight behind the cannabis movement. Amazon officially backed federal legalization and even removed its marijuana drug-testing policy for most of its employees.

Investment banks are also beginning to lobby for the industry.

Lawmakers are pushing for federal legalization, and Senate Majority Leader Chuck Schumer already proposed a bill to help make that a reality. It’ll likely face opposition, but Senate’s Democratic majority hopes to cross the finish line sooner rather than later.

In the meantime, we’ll continue to see additional state-level legalizations.

U.S. cannabis MSOs can’t list on major stock exchanges like the Nasdaq or NYSE for the simple fact that marijuana is federally illegal. So, they’re relegated to the over-the-counter market and listing in Canada. This keeps a lot of institutional money away … for now.

When cannabis is legalized federally, we’ll see institutions enter the game. There will be significant positive pressure on cannabis stocks because there will be substantial demand for industry exposure.

That should send prices flying along with the other important developments post-legalization, including access to banking and insurance services, as I’ve previously pointed out to my Marijuana Millionaire subscribers.

With these factors in mind, here are my two favorite ETFs to capitalize on the cannabis industry’s rebound.

MJ is a fund that seeks exposure to cannabis companies worldwide, and it tracks the Prime Alternative Harvest Index. MJ is the largest and most liquid cannabis exchange-traded fund, and it targets companies that would benefit from both its medicinal properties and expansion of recreational use.

This ETF’s top three positions by weighting are Tilray (TLRY), Canopy Growth (CGC) and Aurora Cannabis (ACB). MJ has over $1.1 billion in assets under management (AUM), and its expense ratio is 0.75%. The fund’s average trading volume is 814,000 shares.

Let’s look at the six-month chart: 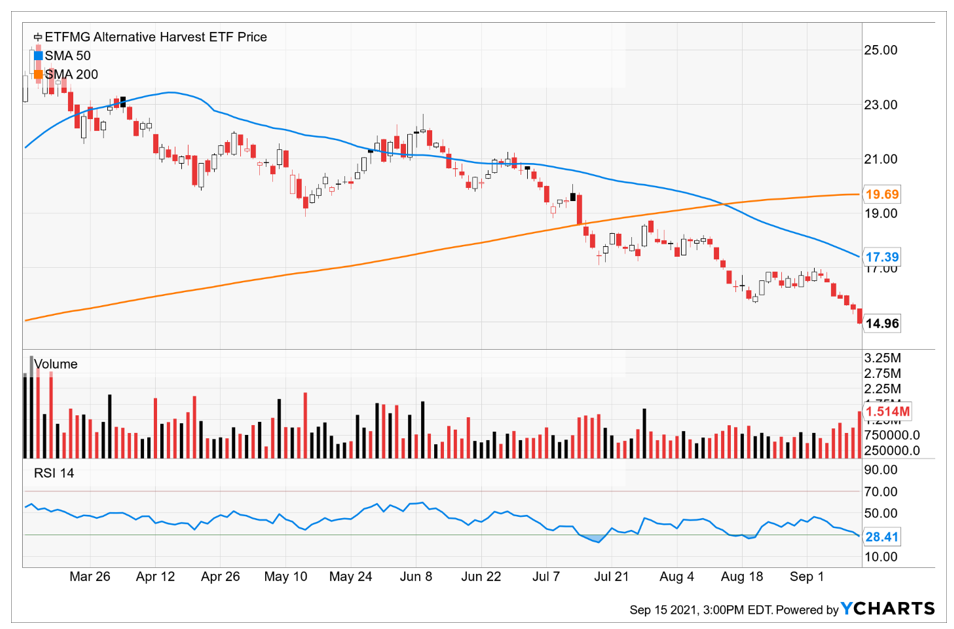 MJ is currently sitting at a six-month low and is below both its 50-day and 200-day moving averages, which suggests room to rebound.

I’ve stayed away from this ETF in the past because of its heavy weighting towards Canadian cannabis stocks. But this is also the fund that will be the first to get institutional money because its holdings are listed on major exchanges.

This ETF focuses solely on U.S.-based cannabis companies, and it offers diversified exposure for both the biggest players and smaller companies with breakout potential. MSOs are among the biggest beneficiaries of potential legalization because of their expansive infrastructure and vertical integration.

Oftentimes, the best opportunities are found in overlooked industries. Cannabis stocks were thrown in the gutter, but that won’t last forever. Indeed, they are value stocks — some of the best values we’ve seen in a decade or so.