How to Trade Major Opening Gaps 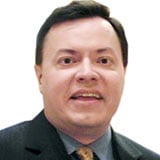 In this article, Ken Calhoun explores how to trade “major” gap continuations, which are a favorite swing trading strategy for stock and ETF active traders.

Compared with minor gaps, major gaps are defined as moves of at least 1 point above or below the prior day’s high or low, respectively. Minor gaps are best for intraday trades, while major gaps are ideal for swing (multi-day) trades, for continuation trades in the direction of the gap.

In taking a look at Figure 1, which is the NASDAQ Composite, it is evident that the market gapped up and rallied to new highs following the gap. For market index gaps (and sector indices), a major gap can be defined as one that moves at least the magnitude of the prior day’s trading range (or Average True Range/ATR for prior day), then continues in-trend to take out new highs, for a long market.

Inexperienced traders who have seen mistaken educational information and books that advocate “selling gaps up” and “buying gaps down” are not trading the way professional traders do, for most entries. Institutional buying and selling pressure makes gap continuation trades ideal for intraday and swing traders, for the majority of gaps.

Trading Major Gaps: What to Look For
Typical indicators, such as looking for increasing volume as a confirming entry signal, can help traders see the difference between likely gap continuations and reversals. Also waiting until a micro-bullish cup pattern is seen (a cup of less than 1 point depth, that visually looks like the letter “U”) prior to entering can help potentially get in on stronger gap continuation trades as well.

Looking at Figure 2, Whirlpool (WHR), a high-volume opening range bar of over 40,000 (40k) shares can be seen at the open, at 9:30 a.m., as this gap stock continued to rally to new highs throughout the session.

Note that the size of the gap is nearly one Average True Range (ATR), as defined by the prior day’s high-low range of 2 points, for the gap continuation. WHR gapped nearly 1 ATR (57.5 to 59.0 = 1.5 points), then rallied for an additional 2 points to close near 61 on this session.

Managing risk with gap continuations simply requires the trader to ask, “What price proves the trade wrong?” In this case, it would have been a loss of opening-range support at near 58.5, which was not taken out. It’s a good idea to use roughly a half-point under support as an initial hard stop-loss level, to minimize the cost of incorrect entries.

Some tips to avoid false major-gap continuations include:


Looking for major high-volume gap continuations is a particularly effective strategy for active traders, when done correctly. Testing out the difference between all the gap continuation patterns, compared to the occasional gap reversals that are seen, is a useful technique to help master the pattern recognition, timing and trade management skills it takes to potentially make this strategy successful.

Ken Calhoun is a trading professional who has traded millions of dollars of equities since the 1990s, and is a frequent speaker at the Traders Expo. He is a UCLA alumnus and is the founder of DaytradingUniversity.com, a popular online educational site for active traders.