The current Spike & Channel Bear Trend in the euro typically evolves into a trading range though there is a 25% chance of a stronger bear move, writes Al Brooks.

The EURUSD weekly chart is in the channel phase of a yearlong Spike & Channel bear trend. There is no bottom yet. However, the odds are that there will eventually be a bull breakout and then a rally to 1.18 over the following months.

The EURUSD weekly chart had a strong reversal down a year ago. That breakout was a spike down (see chart). Over the past year, it has continued down in a bear channel. A Spike & Channel bear trend evolves into a trading range 75% of the time. That requires a break above the bear trend line. 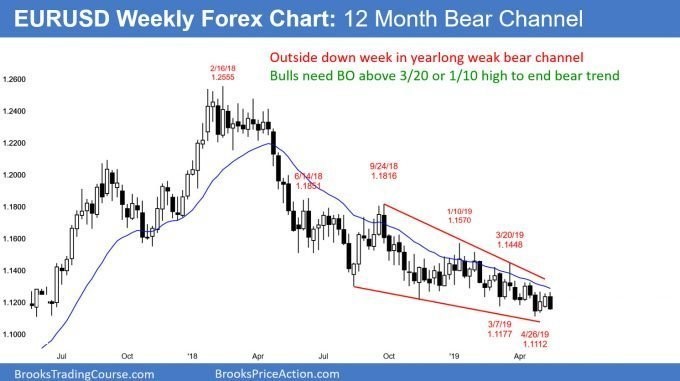 The rally usually tests up to around the top of the start of the channel. That is the June 14, 2018 high of 1.1851. At that point, traders expect a test down and then a trading range. This process will probably take about a year to unfold.

At the moment, there is no bottom. A bear channel can last a lot longer and fall much further than what traders might think is reasonable. Markets have inertia. They tend to continue what they have been doing. The EURUSD weekly chart has been working lower in a bear channel for a year.

How does a bear channel end?

There is a 25% chance of a strong breakout below and then a much bigger bear trend. More often, if there is a bear break below a bear channel, it will be the climactic end of the bear trend. It usually reverses up within five bars and then begins a bull trend.

Another type of bottom comes when the channel begins to go sideways for many bars, like it did for five months through April. The bulls look for a strong bull signal bar and then a rally above the bear trend line. There was no strong buy signal in that particular tight trading range and the bears got a bear breakout in April.

Another possibility is that the channel can end with a surprisingly big bull bar in the absence of a good buy signal bar. If the bar is big and closes far above the bear trend line, traders will conclude that the bear channel has finally ended.