How to Trade Commodity Currencies in Forex Trading

One of the terms many traders and readers might come across in the financial media is the term commodity currencies, explains Konstantin Rabin of Forexbrokerslist.org.

The forex commodity currencies are the currencies issued by countries, which are one of the largest exporters and producers of one or several commodities. Consequently, the price of those types of commodities typically has a major impact on the respective economies of those countries.

For example, Australia has a significant amount of gold and silver reserves and its mining companies produce hundreds of tonnes of precious metals on an annual basis. Consequently, as the price of those commodities rises, the Australian mining companies earn higher revenues and at the same time the Australian government also benefits from the increased tax revenues. This is exactly why the Australian dollar is usually closely tied to the gold price.

The exchange rates of the Canadian dollar and Russian ruble, as well as that of the Norwegian krone are closely tied to the oil commodity market. Those three countries are some of the largest exporters of oil in the world. As a result, the changes in the price of this commodity can have a major impact on the exchange rates of those three currencies.

New Zealand is famous for its large production of dairy products. This is why the New Zealand dollar has a positive correlation with the dairy prices in the commodities market.

Why Do People Trade and Invest in Commodity Currencies?

At this stage one question people might have is: why some traders are so interested in trading with commodity currencies?

Well, for the sake of accuracy it is worth mentioning that there are indeed several reasons why this might be the case. Firstly, it is important not to forget that the diversification of a portfolio has always been one of the most important principles in trading. So relying solely on EUR/USD or just 2-3 currency pairs for trading, might not be the most effective or reliable long term strategy in the forex market.

It goes without saying that this is not the only reason why investors and traders might want to trade those currencies. One of the additional reasons for doing so is the fact that very often commodity currencies give market participants opportunities to earn higher yields as well.

This became especially attractive to the market participants in the aftermath of the 2008 financial crisis. As the US Federal Reserve, along with the majority of major central banks reduced its interest rates to 0.25% or lower, investors were looking for currencies that could offer some reasonable returns for their investments.

During this period the Australian dollar and New Zealand dollar became two very attractive alternatives to the US dollar and the euro, since their respective central banks maintained much higher interest rates than some of their peers.

In fact, after the outbreak of the COVID-19 pandemic, when the Reserve Bank of Australia, as well as the Reserve Bank of New Zealand reduced rates to 0.25%, the Russian central bank still maintained its rate at 4.25%, which can be very attractive for some carry traders.

Finally, it is also worth pointing out that investing in commodity currencies can be a more convenient way to invest in the commodity sector in general.

This is because there are indeed some serious storage costs involved with purchasing and then storing the physical gold, oil, or other commodities. One alternative can be exchange-traded funds, also known as ETFs. However, here it is important not to forget that ETFs are not completely free options either, since they do have some management fees associated with them.

In addition to that, it is also important to note that physical gold does not pay any dividends or interest. This means that purchasing physical commodities or exchange-traded funds are not very appealing options for income-orientated investors.

On the other hand, investors and traders interested in investing in gold can simply invest in Australian government bonds, certificates of deposit, and other fixed-income instruments, as well as in Australian mining companies and earn some regular income in the process.

Obviously, this also extends to those currencies, which have large exposure to oil. For example, people who are interested in investing oil can buy government bonds, certificates of deposit, or stocks, which are denominated in Canadian dollars, Norwegian krones, or Russian rubles and earn some sort of regular income along the way. So what we are dealing with here is that some market participants do trade commodity currencies as a proxy for the prices of oil, gold, dairy, and other commodities.

So how does the positive correlation between some commodities and currencies work in practice? Well, in order to understand this better, we can take a look at this daily USD/CAD chart: 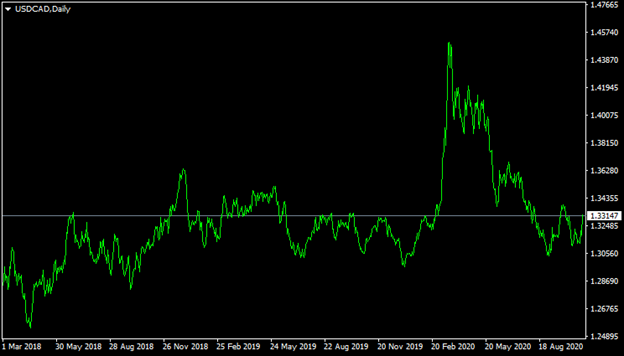 As we can observe from the above diagram, at the beginning of spring 2018, the USD/CAD currency pair was trading close to the $1.29 level. After making some initial gains the pair has stabilized around the $1.33 level and mostly move sideways until the end of 2019. However, after the outbreak of the COVID-19 pandemic, due to the lockdowns and travel restrictions across the globe, the oil price collapsed. On the chart below we can see how all of this has unfolded: 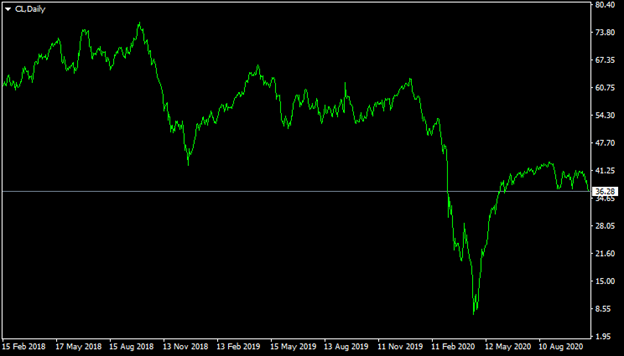 As we can observe from the above diagram, the oil price did face some notable decline during the second half of 2018, but it then has recovered and stabilized during 2019. Yet, the biggest drop came in during the first quarter of 2020, when the price has collapsed completely, even crossing into the negative territory during April 2020. As a result, the Canadian dollar has suffered some serious losses, with USD/CAD currency pair going as high as the $1.45 level.

However, as we can see from the diagram, from that point onwards, the oil price has recovered considerably, eventually stabilizing near the $36 level by October 2020. The result of this development was the recovery of the Canadian dollar. By October 2020, the USD/CAD pair is already down to the $1.33 level.

As we can see from this example, there is a strong degree of positive correlation between the exchange rates of the Canadian dollar and the oil price.

However, as mentioned before, the Canadian dollar is not the only currency, which is heavily influenced by the oil price movements. To look at yet another example of such a relationship, we can take a look at this daily USD/NOK chart: 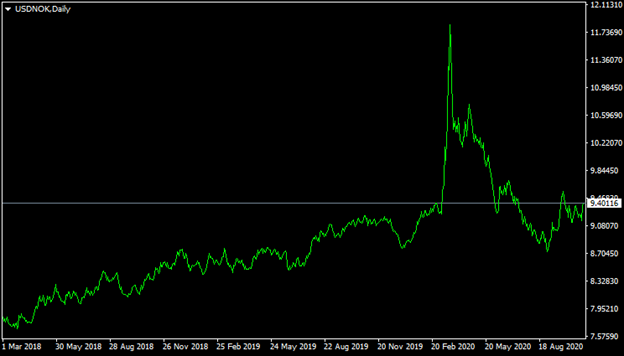 As we can see from the below chart, the USD/NOK exchange rate stood close to the 8.50 level during the early spring 2018. During the subsequent period the US dollar has made some steady gains against the Norwegian currency. However, this upward trend was accelerated after the outbreak of the COVID-19 pandemic and subsequent collapse in oil price. As a result of those developments, by March 2020, the USD/NOK currency pair has risen all the way up to the 11.30 level.

However, as the oil price began to recover and returned to more normal levels, the Norwegian currency has started to regain some of the lost ground as a result of this process, by October 2020, the USD/NOK currency pair now trades close to the 9.40 level.

As we can see from those examples, the exchange rates of the Canadian dollar and Norwegian krone are closely tied to the latest developments in the oil markets. So, it seems obvious that here we are dealing with a case of high degree of positive correlation.

How Traders Can Trade Commodity Currencies?

At this stage, many people might have a very logical question: how traders can use the information presented above to trade commodity currencies? Well, there are several principles to keep in mind here.

Firstly, as we have seen from the above examples, generally speaking, commodity currencies tend to move with the latest change in the commodities market. Therefore, it is very helpful to check the the latest developments of those markets, since it can give us valuable insights into the potential moves of such pairs as AUD/USD, EUR/AUD, EUR/CAD, USD/NOK, EUR/NOK, USD/CAD, NZD/USD, USD/RUB, as well as other pairs related to commodity currencies.

In addition to that, traders wishing to trade with commodity currencies must keep in mind that the correlation between those two asset classes is not perfect. There are indeed some factors, including the central bank interest rates can significantly alter the normal trading patterns of a given currency pair.

During the past years of trading, we have seen the cases that despite the rise in commodity prices, the Canadian dollar still displayed a significant amount of weakness in the forex market. The USD/CAD exchange rate has appreciated because of the repeated interest rate hikes by the US Federal Reserve.

This was not the only case of divergence, in fact after the recovery during May, the price of oil was quite stable in June 2020, but the Russian ruble still suffered some notable losses, because of a number of rate cuts authorized by the Bank of Russia.

At this point it is important to point out that the effects of interest rate changes are typically transitory. After the initial reaction, the influence of latest interest rate changes tends to dissipate, and the given currency pair simply returns back to the normal trading patterns. However, just like with any other rule in the market, there are some exceptions to this as well.

Here it is also worth remembering that the high degree of correlation between the prices of commodities and commodity currencies is more apparent on the longer-term daily and weekly charts, than on short-term diagrams, like 5-minute or 15-minute charts.

So far, the examples we have discussed only represented the cases of short-term divergence, lasting from several days to several weeks. However, this does not mean that the cases of divergence cannot persist for a longer period of time.

One example of such a scenario, is the case of the relationship between the Australian dollar and gold prices. For at least the last couple of decades, those two assets have been closely tied together. In fact, the degree of the positive correlation was so strong that some market participants were using the Australian dollar as a proxy for getting some sort of exposure in the gold market.

Now, despite those long-term tendencies there was the case of significant divergence from November 2018 until March 2020. During this period the price of gold has risen consistently from $1180 to the $1680 level.

Now, despite the fact that this precious metal was making such notable gains, the Australian dollar declined, with AUD/USD dropping from $0.71 all the way down to the $0.57 level.

It goes without saying that as a result of those decisions, the Australian dollar became much less attractive for investors, savers, as well as for traders, hence the resulting depreciation. So, this example shows that the divergence between the commodity currencies and prices of commodities can last for at least several months, depending on the circumstances.