The stock market remains very bullish but it’s been nervous, mainly due to growing tensions in North Korea. This is coinciding with the downward correction in stocks and it’s providing a good opportunity to buy more stocks, if you want to add to your position, notes Mary Anne and Pamela Aden, editors of The Aden Forecast.

Looking at the chart, you can see the S&P 500 is bouncing up from its 15-week moving average. This is a bullish sign, it shows strength and several of the others are similar.

Plus, Nasdaq hit a new high today and it could be leading the way up. Nasdaq QQQ (QQQ) is still our favorite, along with Adobe (ADBE) and they’re our top picks for new positions. Keep the other stocks you have.

Gold continued to rise, recently reaching another 5+ month high on safe haven demand. The A rise has been great, rising 14+% since the December low, see chart below.  It’ll remain strong above its 15 week average.  Yet it looks like the A rise may be near maturity and the upcoming B decline may be moderate.

Silver, platinum and gold shares haven’t kept pace with gold, and they could be leading the way down.  Silver and the XAU index will remain strong above $17.70 and 85, respectively.

Crude oil fell this week on U.S. supply concerns and it could decline further, but it’s in a major bull market above $46.  The base metals have been volatile and they fell sharply.

Copper reached its January lows but it remains in a turnaround uptrend by staying above $2.30.  Palladium has also been volatile at the highs, but it looks good.  Keep your positions. 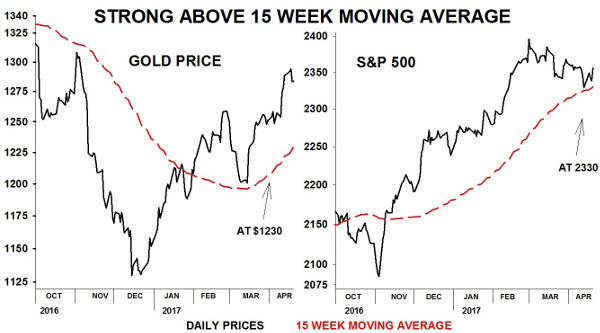 Long-term interest rates have been on the decline. That is, bond prices are rising. They’re also benefiting as a safe haven and they have room to rise further. We continue to believe this will likely be a temporary upmove before bond prices head lower.

For now, bonds remain risky and it’s best to stay on the sidelines. If you’re still holding bonds, you may want to use this upcoming strength to lighten up on your positions.

The U.S. dollar index keeps creeping down. It’s vulnerable by staying below 100.90 and it would be weak below 99. This would be a key sign of further dollar weakness. A new bear market would be confirmed on a sustained decline below 97.80.

Currently, the U.S. dollar is still bullish and we advise keeping your funds in dollars. But Trump doesn’t want a strong dollar and its days could be numbered. Stay tuned.