Long Bond Rally Teed Up, But Bull Move is Over

The 30-year bond futures market is oversold and will probably bounce over the next couple weeks, writes Al Brooks.

The 30-year U.S. Treasury bond futures has been trading sideways for three months. Because the monthly chart had four consecutive bear bars, a bull bar in January is less important than it otherwise would be (see chart below). 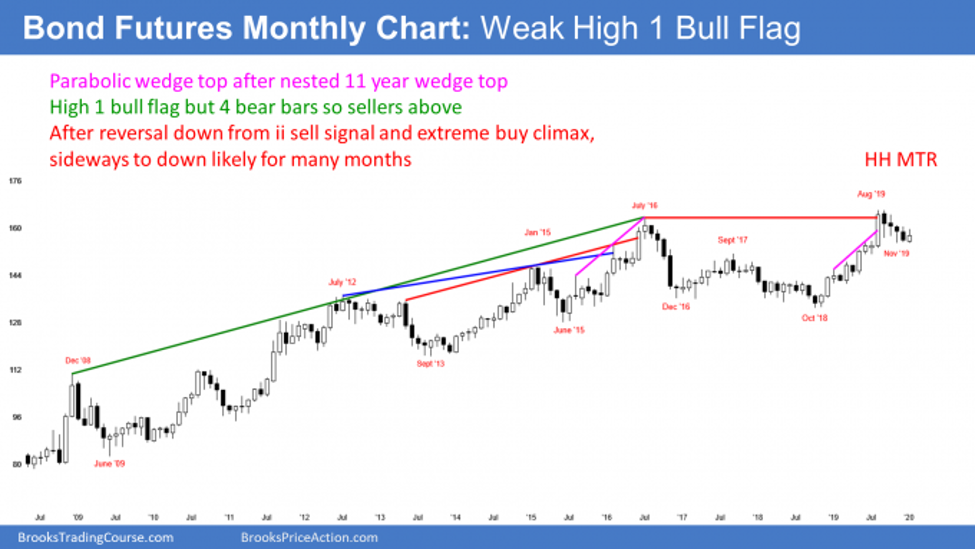 Last year rallied in a parabolic wedge buy climax on the monthly chart. Traders therefore expect at least a couple legs sideways to down before the bulls will be willing to buy aggressively again.

After four bear bars, most bulls will want at least a small second leg down before buying. Consequently, even though January will probably be a High 1 buy signal bar, traders expect only a one- to two-bar (month) bounce. There will probably be sellers above. The monthly bond chart should form a lower high and have at least a small second leg sideways to down after a one- to two-month bounce.

I have mentioned many times over the past several years that the bond market has a nested wedge top on the monthly chart. This will probably lead to a 10- to 20-year bear trend.

However, I have also said repeatedly that a top on the monthly chart can take several years to complete. While the bonds transition from a bull to a bear trend, there still can be new highs. But the new highs will probably be brief.

At some point, there will be a strong enough selloff to create a consensus that the bonds have entered a bear trend. The monthly chart is still in transition. But there is a 60% chance that the bond market is in the early stage of a 10- to 20-year bear trend. This is true even if there are a couple more minor new highs over the next year or two.