The year started with a bang with death of the Iranian General Soleimani. Oil originally spiked but the crisis is over and oil is well below the levels when it started to spike. It was my contention that if oil were to dip below the point of where it was at the origin of the crisis, it would be a sign of economic slowdown.

According to numerous sources, including CNBC, oil fell more than 2% Wednesday based on a market surplus forecast by the International Energy Agency. It appears the major concern right now is that China’s coronavirus will cause the kind of travel restrictions that hurt demand during the peak travel time given the Lunar New Year holiday period. In a bigger sense, people are concerned about the spread of the Chinese Coronavirus virus stunting growth for the global economy.

Let’s take a look at the chart to examine if we could’ve seen this drop coming. By the time the crisis reached its peak from the June low it was up $14.85 at the same time it was 184 days from the last highest high on April 23. There was also a failed attempt down on Nov. 19 at 3.33. From that point the pattern squared out at 34 days up from that point (see chart).

So, the top turned out to be an incredible confluence point. On the continuation chart this high was $65.65 but the chart rolled over and its currently $65.68. The continuation rolled over on Friday so the 65 vibration in the high still had influence. Why is this important? I told my readers on Tuesday night because the hourly chart had peaked on the gap and started rolling over at 64 hours there was likely to be a slightly bearish resolution (see chart below). So, Wednesday came along and nearly blew that outlook out of the water. The direction projection was correct, just the degree of it was off. It could still manifest into a new term trading range but the outlook does appear lower. 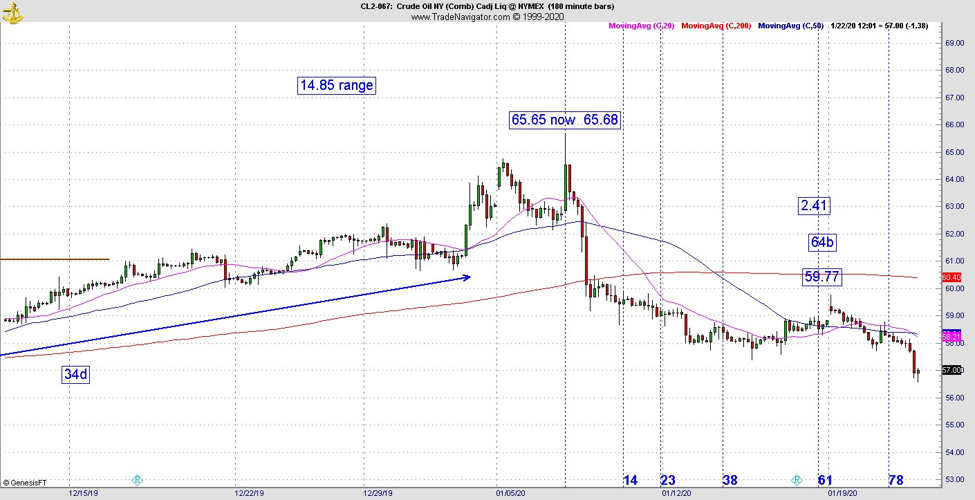 There is a butterfly effect to lower oil prices. The NYSE Arca Oil Index (XOI) started the week on a gap down for Tuesday and followed through on Wednesday. With the Philadelphia SE Semiconductor Index (SOX) gapping up on Wednesday this is truly a tale of two markets. This is the first time we’ve seen a divergent, rotational market in quite some time. The market is not likely to do well without oil stocks. Let’s speculate on what might happen.

Crude oil is taking a break at best or catching cold or a virus at worst. What happens if the virus continues to mutate? Just as new cases are popping up all over the world, the financial impact will spill over into other sectors of the market. I’m not saying this is going to happen but we all know it could happen. Of all the problems we’ve dealt with in terms of domestic and geopolitical risk over the past couple of years, who among us really believed it would be a virus that would ultimately knock over the market?

It hasn’t happened yet but is starting to materialize just as much of the U.S. stock market hit its 161-day window from last year’s June 3 low. If that were all that was materializing, it would be enough, don’t you think? But now social mood has to deal with a Senate impeachment trial.

History suggests financial markets don’t like this type of uncertainty. However, according to a website called Oddswatch where the probability is generated from the betting markets, there is currently a 7% chance Trump will leave office early due to any reason. According to this website betting markets are amongst the most accurate indicators of political outcomes. That might be true but the flipside to this outcome is if something out of the ordinary were to happen, it would be a black swan to the market since they aren’t considering conviction by the Senate as a realistic outcome. The larger outcome is a public that has grown tired of the never-ending conflict. A sour social mood could also cause markets to drop. Even as January started well for the bulls, from this point forward given where we are with oil not participating in the rally, the stock market could be headed in a direction other than up.

Gold Charts R Us: A Golden Trio
14 hours ago

Coronavirus is not dead, nor is its impact on energy markets, reports Phil Flynn....