The U.S. 30-year treasury bond futures are reversing higher, but the rally will likely fail to produce a new high, writes Al Brooks.

The 30-year U.S. Treasury bond futures is reversing up in January after four consecutive bear bars on the monthly chart (see below). Four is unusual when there has been a strong bull trend. I wrote last month that January would probably be a bull month. With only five trading days left in January, the month will probably be a bull bar closing near its high. 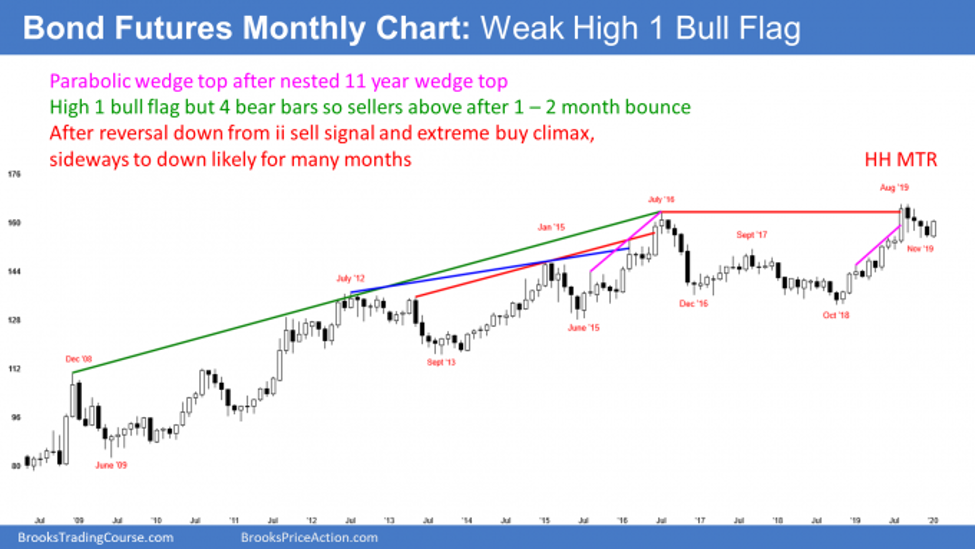 Since the selloff is also a pullback in a bull trend, January is a High 1 buy signal bar. However, after four consecutive bear bars, there will probably be sellers not too far above.

This is especially true since 2019 formed a parabolic wedge buy climax. That typically leads to two legs sideways to down. The four bear bars formed the first leg. Traders will look for a lower high over the next few months and then a second leg sideways to down.

What is the current trend?

I have written many times over the past few years that the 30-year bull trend is ending. Traders should expect a decade or two of lower prices and higher interest rates.

I keep saying that a 30-year rally could take years of sideways trading before reversing into a bear trend, at least for confirmation. This transition has been going on for four years and there is no clear reversal yet. There might be one or more new highs before the bear trend becomes clear.

It is important to understand that Americans will not accept zero interest rates. That will keep a cap on bond prices while the transition into a bear trend continues.

While massive losses in stocks are disturbing, they aren’t unexpected, however the bond market...