The Falling Dollar Is Giving These Others a Leg Up

Don’t look now. But something in your wallet or purse is “shrinking” by the day, says Mike Larson, growth and income expert and editor of Safe Money Report.

I’m talking about your US dollars. While they may not be getting PHYSICALLY smaller, they are steadily losing purchasing power—and the process is accelerating in 2021.

That, in turn, presents both opportunities and risks to you as an investor. I want to make sure you capitalize on more of the former, while dodging more of the latter!

Start with this chart of US Dollar Index futures going back to 2009. The Dollar Index, or DXY, tracks the performance of the US dollar against a basket of six foreign currencies. The euro is the largest component, while the remainder of the basket consists of the British pound, Canadian dollar, Japanese yen, Swedish krona, and Swiss franc. 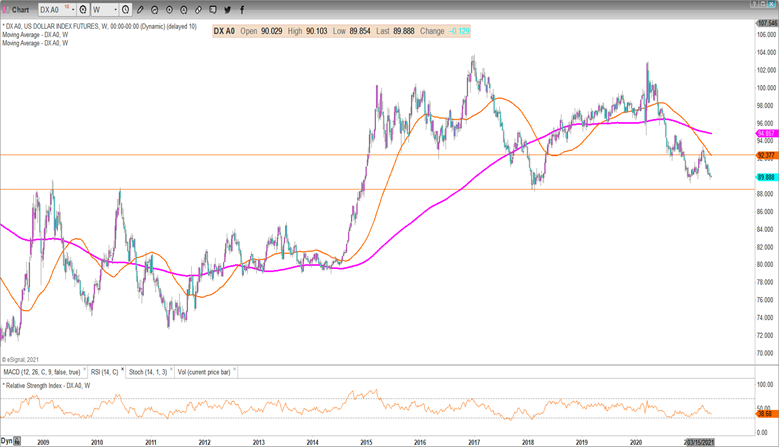 You can see that the dollar rallied sharply in 2014-2017, then made a secondary peak during the worst of the COVID-19 panic. But it’s been mostly downhill since then. If we break through the 88.50 level, I would view it as a massive technical failure on the chart—one that would foretell even more losses over time.

The catalyst here is pretty obvious: We’ve embarked on the biggest money printing, borrowing, and spending binge in US history! That has fueled an epic money flood into financial and real assets...creating the “Prosper Now, Pay Later” market environment I talked about recently.

But the US dollar has been one of the primary victims. As the dollar falls, and inflation rises, the intrinsic value of your money gradually erodes.

So how can you fight back? Make sure you don’t get your pockets picked a little more each day? With many of the same “Safe Money” strategies I’ve been advocating!

Think about gold, silver, and mining shares. They tend to behave as “contra-dollar” assets. In other words, they tend to rise when the US dollar falls. It’s no surprise that gold just punched through $1,900 an ounce again, while silver just topped $28.

High-quality, foreign stocks with generous dividends and solid Weiss Ratings can be another profit source. If you’re a US-based investor who buys shares of foreign companies denominated in foreign currencies...and those foreign currencies rise against the greenback...you get a currency performance “kicker.”

Or in other words, you can profit from both foreign stock appreciation and foreign currency appreciation. Many ETFs and mutual funds that invest in foreign shares on your behalf also let you capitalize on those forces.

I’m also going to share some ways to capitalize in a few weeks at The MoneyShow Orlando. This is my first in-person conference appearance since COVID-19 struck, and I’m very excited to get back to speaking with investors like you face-to-face.

The event runs from June 10 through June 12 at the Omni Orlando Resort at ChampionsGate. You can catch my specific presentation “Prosper Now, Pay Later: Windfall Strategies for a World Gone Mad” on Friday, June 11, from 2:30 pm to 3:15 pm EDT.

For complete details, and to register to attend, just click here. I hope to see you there.