Stocks keep grinding higher but the action in the options market says that even as they continue to mark prices higher in what looks to be an accelerating momentum loop, the algos are, at the same time, preparing for the next nasty surprise, says Joe Duarte of In the Money Options.

You bet this is unsettling. But it’s folly to fight the Fed and to fight the market’s momentum. Specifically, that’s because as long as the perception is that the Fed is not going to cut back on QE, despite their current actions and recent talk, the odds still favor higher stock prices.

Look to Housing and Bond Yields for MELA Clues

I have all the details below. But first, let’s consider the following. The Fed has only hinted that they may “taper” their QE, but the algos took them at their word and crushed the stock market, which may have set off a chain reaction through MELA, the complex adaptive system composed of the markets (M), the economy (E), people’s lives (L) and the algos (A). And even though Friday’s employment data was better than expected the system is still in flux. And where that’s quite visible is in: 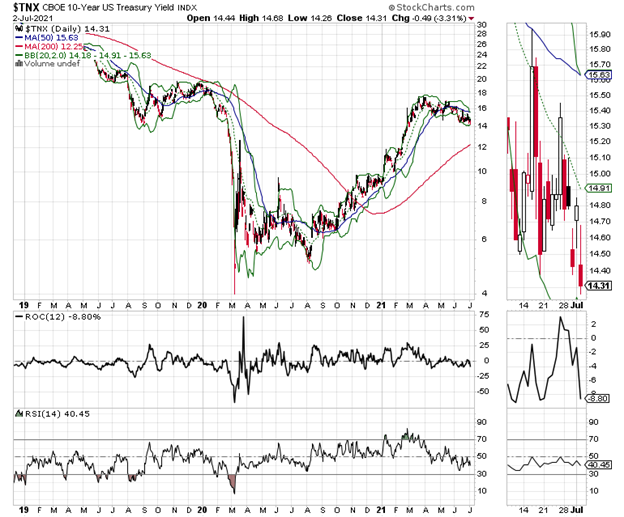 What makes the current scenario most interesting is the fall in the US Ten-Year note yield (TNX), which looks headed for a test of the 1.4% area. Moreover, it will be interesting to see if this decline continues and, if it does, what the effect may be on the housing market and the homebuilder stocks. 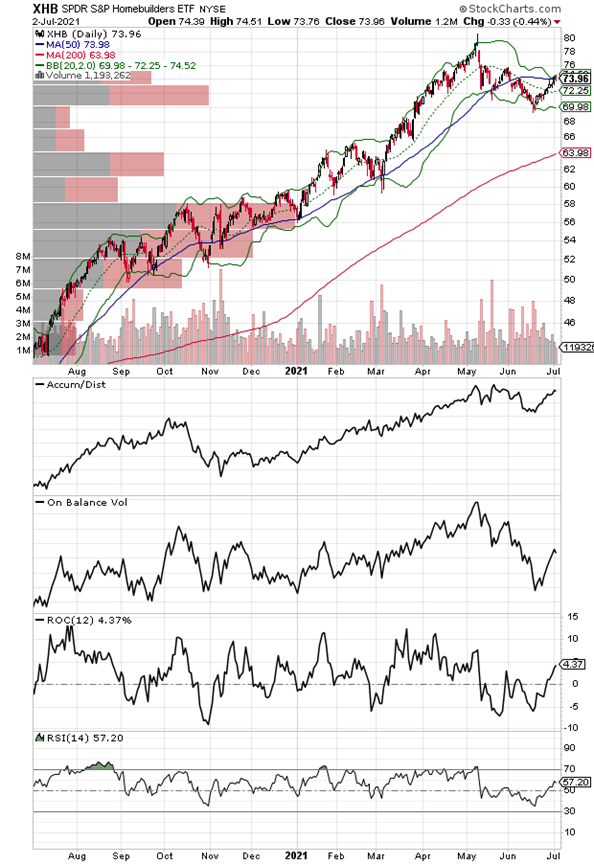 More to the point, one of the key bellwethers in the MELA system is the housing sector. This is because when people feel secure about their finances, especially when the stock market is rallying and their 401(k) looks to be in good shape, they are more willing to take chances on big purchases such as homes.

In fact, the Homebuilders ETF (XHB) is currently testing its 50-day moving average, after a fairly sizeable pullback of late due to the decline in mortgage applications. However, if XHB can move above its 50-day, it would suggest that even a slight decline in mortgage rates would be good enough to give homebuilder stocks a bounce.

Certainly, the fall in bond yields points to expectations of a weakening economy, as well as the possibility that the Fed won’t openly change its interest policy for some time. Still, it pays to see what the Fed does, not so much what is says.

Thus, what brings it all together is the fact that the Fed is actually doing a sleight of hand tapering already via its reverse repo operations, which have removed nearly $2 trillion from the banking system over the last couple of weeks. Moreover, the Fed is draining money from the system even as it continues to inject $120 billion per month into the bond market via QE.

Thus, the central bank seems to be giving with one hand by injection $120 billion per month worth of QE into the bond market while taking with the other by draining reserves from the banking system to the tune of nearly a trillion dollars per turn. Meanwhile the MELA system seems to be confused and pulling back its bullish horns. Yet, this may change if bond yields continue to drop.

So, what does it all mean? Your guess is as good as mine given the fact that stocks keep grinding higher. If these were normal times, I’d be looking to short the market. But these are nowhere near normal times. So even as we trade the long side, we continue to do it with all types of trepidations and a very itchy trigger finger on the sell button as the algos, see directly below, are not taking any chances.

And while you prepare for whatever comes next, keep a close eye on bond yields and the homebuilders. If yields continue to fall and homebuilders rally from here, things may get interesting when it comes to what the Fed does next.

The fear in the stock market is rising but so are prices. And here are the two take-home messages at the moment:

This seemingly opposing set of conclusions is best viewed through the lenses of the algo controlled options market where our weekly data review shows no major change in the key metrics built around the S&P 500 SPDR ETF (SPY). So, what’s evolved is that 430 is the latest SPY support level, with the ongoing trend being that even though there is a high level of call options directly above this price area, 430, or whatever the current support level happens to be, the immediate area just below has become a place of heavy put option activity.

What this says is that even though the market is currently in a grinding up trend, the algos do not want to get caught in a bind when things turn lower, which of course they will know before anyone else does since they see the orders before anyone else does. Moreover, unless they change this trading pattern it seems as if they would not be surprised if the downturn could happen suddenly, much as what happened when the Fed started with their QE “taper” talk.

Louisiana Pacific May Not Be Totally Deadwood

It may be too early to call for a bottom in lumber stocks. Of course, any turnaround in prices could be temporary or even seasonal, but as the headlines suggest lumber prices may never rise again, shares of lumber giant Louisiana Pacific (LPX) are quietly under moderate accumulation, just as lumber prices (LUMBER) may be finding a bottom.

The momentum bottom for LPX may have materialized in late June (see volume spike on 6/28) where a huge volume surge on a down day might have marked the end of the heavy selling. Since then, prices have slowly moved higher. Of course, this may be nothing more than the proverbial “dead wood” bounce. But as hurricane season develops, demand for lumber is likely to climb. Moreover, with the recent pause in housing, there is likely to be some pent-up demand from bargain hunting homebuilders who put off buying lumber for new homes—of which there is no lessening demand in the midst of a severe dearth of supply, and despite record prices. 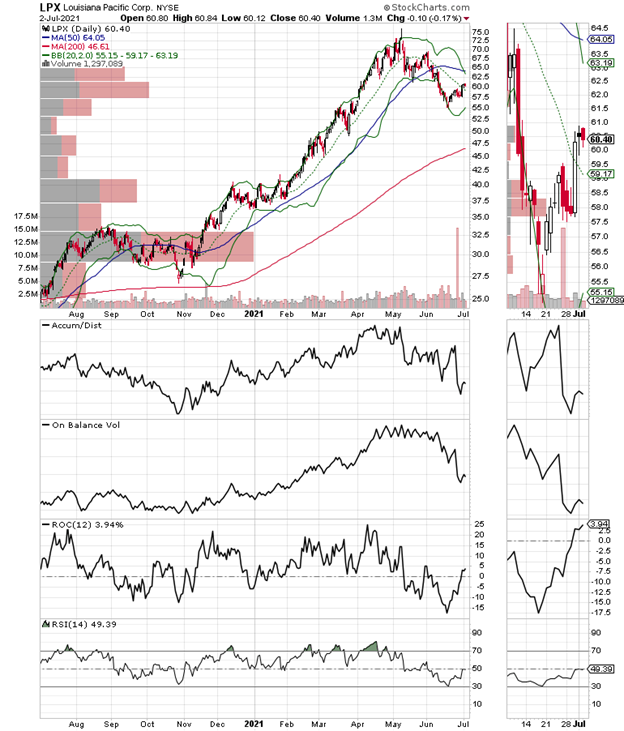 The technicals are still lagging the rise in the stock’s price with Accumulation Distribution (ADI) rand On-Balance Volume (OBV) flattening out at best. But here is what I like, and you can call me old fashioned and out of touch if you want. The stock is selling at just below five times forward earnings while in the most recent earnings call, they doubled their guidance for the year.

That suggests that barring a major disaster in the economy and the housing market (certainly plausible on both), the odds favor that LPX will actually surprise on its earnings, which are due out on 8/2/21. Thus, if I’m right we should see a steady climb in the stock’s price over the next few weeks as traders start betting on a positive surprise from the company. Meanwhile, hurricane season is getting an early start and could be a short-term booster for lumber prices.

So, is this a high-risk call? Probably. But I recently bought some shares and recommended it to my subscribers with a reasonable sell stop. Sometimes being a contrarian pays off. And this may be one of those times.

The New York Stock Exchange Advance Decline line (NYAD) made a new high last week, which was confirmed by the major indexes although the current rate of advance is not likely to remain in place without some sort of pullback. Still, the bottom line is that the trend remains up. 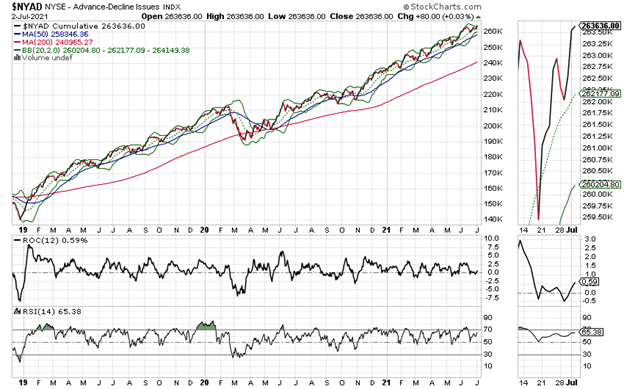 So, at the start of the third quarter, the bulls continue to get the benefit of the doubt. 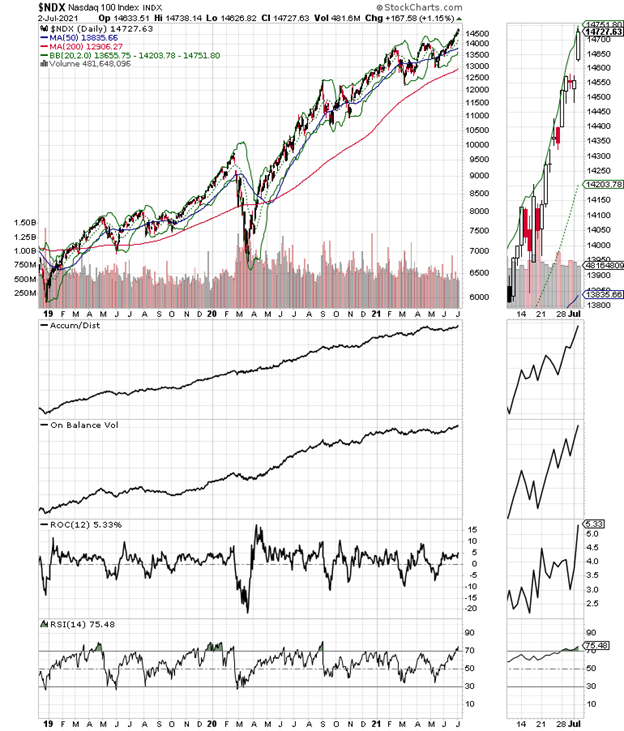 The Nasdaq 100 index (NDX) closed at a new high on 7/2/21. Accumulation/Distribution (ADI) and On-Balance Volume (OBV) confirmed the new high, a bullish development. However, RSI is well above 70, which makes NDX overbought and suggests that some consolidation is in order in the next few days. 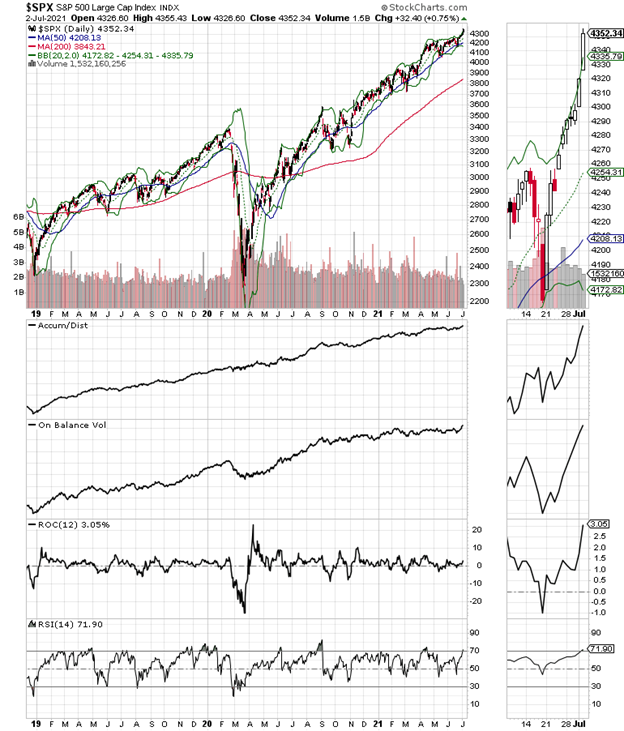 The S&P 500 (SPX) made a new high as well, confirming the bullish action in NDX and NYAD. SPX is also overbought as measured by RSI.