Has a New QE Cycle Begun? Markets Think So.

It’s hard to argue with a momentum market when it seems to be bullet proof. Take last week’s volatility in which a market that seemed to be setting up for a significant decline turned around and ended the week with new highs, says Joe Duarte of In the Money Options.

But despite the volatility, one theme holds up, the ongoing bull market in stocks is all about central bank liquidity. And if last week’s loud actions by the Chinese central bank, and the subtle rumblings at the Fed don’t change course, we may be in the early rounds of yet another QE cycle, which of course means, that until proven otherwise the odds of stocks continuing to rise remain favorable.

A Changing Tide in QE?

If you’re asking yourself: what could possibly go wrong in a market and an economy which depend solely on the Federal Reserve’s constant QE? Think about what happened when the Fed snuck around in the repo market and drained liquidity at the same time the economy was starting to show signs of slowing, with a rise in inventories, new orders and prices, combined with employment and transportation issues plaguing businesses. In addition, despite Friday’s rally, as I describe in the next section, the message from the housing sector, a key component of MELA, should be of some concern to the Fed as it ponders its next step in its QE process.

So, while anyone who traded the markets last week knows that stocks reeled as fears of Fed tightening combined with headlines hinting at a new surge of COVID-19, now featuring the Delta variant, by Friday it didn’t matter to the algos. And even though there are now reports of perhaps even more souped-up versions of the virus beyond Delta, that could be lurking, the algos didn’t care. That’s because in this market, news and reactions to news only last until the next news items hits, especially if the news is about easy money.

Indeed, what happened last week, as with every other recent market pull back, was another rinse-repeat cycle as wait for it—despite news of the Fed wanting to taper and of more COVID shutdowns early in the week. By Friday, the Bank of China (PBOC) decreased reserve requirements in what could be the beginning of yet another cycle of QE. And we were off to the races because the algos are programmed to buy stocks when central banks ease.

But here is where it gets interesting. There are now reports the Fed, due to concerns about COVID may put off the increasingly expected and stealthily under way tapering of QE in the US. As a result, we may have a double barrel of QE heading down the pike as the Fed and the PBOC once again hit the digital money printing presses and the Fed changes its mind.

Stay tuned. Things are about to get interesting.

Following up on last week’s post where I noted that the Fed’s “taper” maneuvers (talk and stealth tapering via repo market) may “set off a chain reaction through MELA, the complex adaptive system composed of the markets (M), the economy (E), people’s lives (L), and the algos (A).” Specifically, I noted that the chain reaction might be most notable in the relationship between bond yields (TNX) and the homebuilder stocks (XHB). 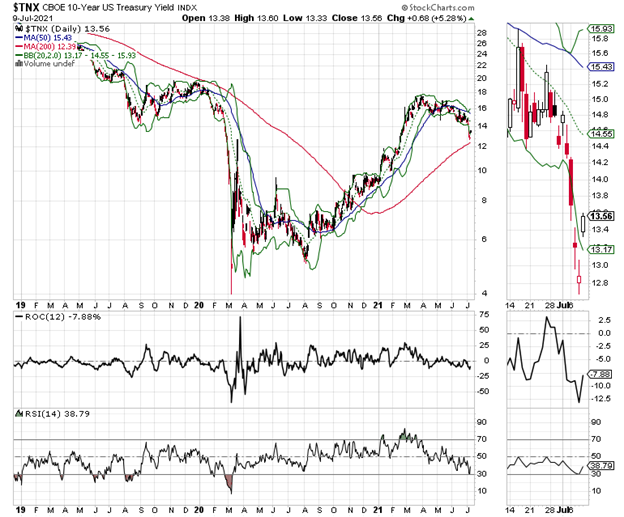 Under normal circumstances, a decline in TNX would be a positive for the housing stocks; meaning that if MELA was functioning at its best, the recent drop in bond yields would be a boost for XHB. But last week’s yield volatility and the lack of any meaningful response in the homebuilders is a sign of concern. In fact, homebuilder stocks failed to rally with any conviction when bond yields dropped early in the week while rolling over when yields climbed on Friday. 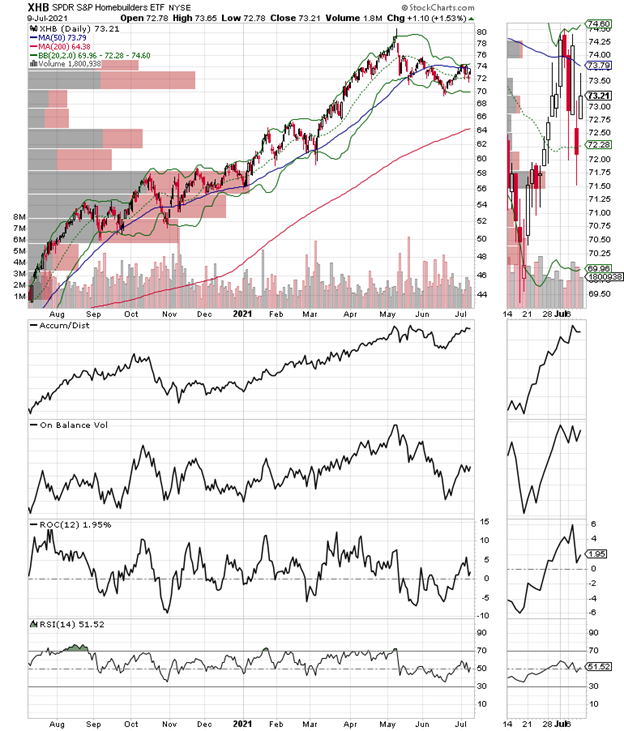 Moreover, the Homebuilders ETF has thus far failed the test as it failed to rise above its 50-day moving average, even after TNX dropped well below the 1.4% yield, which was key support. Moreover, the bad vibes for XHB may be just starting if TNX moves back above the key 1.4% yield.

The tenor of the options market improved some late last week. But it’s not what it was a few weeks ago when the market’s upside momentum was essentially relentless. The bottom line is that we are not out of the woods yet as the call buyers are not completely overwhelming the put buyers. As a result, market makers are still selling puts and selling stock index futures and stocks to hedge. This continues to put pressure on every rally. So, until we see this pattern change, we can expect the volatility in the market to continue.

Last week, in this space I suggested that the algos were tightly hedging against a decline in stocks via put buying just below the most recent high in the SPDR S & P 500 ETF and that a breach of the 430 price area for SPY could lead to aggressive selling.

Indeed, that’s what happened after a squishy SPY weekly options expiration, which saw a fair amount of negative action sneaking in toward the close. That was likely enough to hit the S&P 500 futures overnight and the slicing of prices through key support levels on 7/8/21. Of course, by Friday, things had changed.

Shares of GPS-based technology-solutions company Trimble Inc. (TRMB) look set to move decidedly higher as rising weather and global uncertainty are likely to increase demand for its services and products. 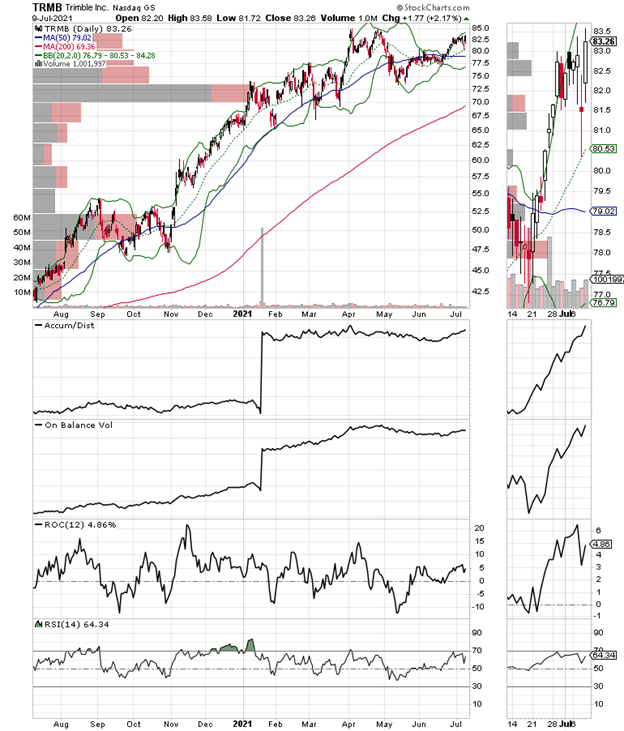 Trimble is one of those companies whose business is spread around many sectors: transportation, agriculture, construction, and engineering. As a result, it’s easy to lump the company with others in the field. But where TRMB is different is in its business being built on the principle that link on-the-ground assets with satellites and delivering a reliable connection between technology and the physical world.

Specifically, TRMB satellites keep track of customer assets and coordinate all aspects of agricultural, defense, oil and gas, transportation, utilities, and government projects and operations. Their satellites take the pictures and their hardware and software (sigh algos) monitor and track situations, then calculate probabilities and possibilities of what could happen next based on the data. As a result of constant monitoring and surveillance of on-the-ground conditions, companies are able to have early warnings, which in turn help them anticipate issues as well as to optimize movement of vehicles, provide adaptation to weather patterns such as changing field irrigation routines, as well as helping to manage supply chains.

What that means is that as the West Coast drought rolls on, the worker shortages continue, the supply chain disruptions remain in place, and the rise in infrastructure projects continues, TRMB is in a good position to grow and maintain its businesses. Putting it all together, TRMB upgraded its guidance for the second half of the year especially based on its expectations for the US government’s infrastructure initiatives as well as with commodity-based businesses.

The stock is now entering a potential long-term breakout zone with resistance at 85 holding the key. A move above this area could take the stock to the low 90’s in a few weeks or less depending on how key situations develop. Accumulation Distribution (ADI) and On-Balance Volume (OBV) are both pointing to higher prices while Volume by Price (VBP) suggests there is little resistance to a move higher.

I own shares in TRMB at the moment.

There was a lot of talk about new market highs on 7/9/2021, and certainly the S&P 500 (SPX) made one. But the New York Stock Exchange Advance Decline line (NYAD) and the Nasdaq 100 (NDX) index failed to measure up. 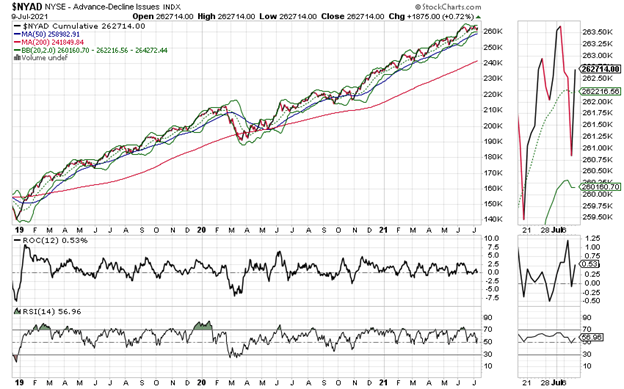 This lack of confirmation, especially from NYAD, may prove to be a problem if not corrected. Of course, if NYAD makes a new high in the next few days then the uptrend will again be confirmed. 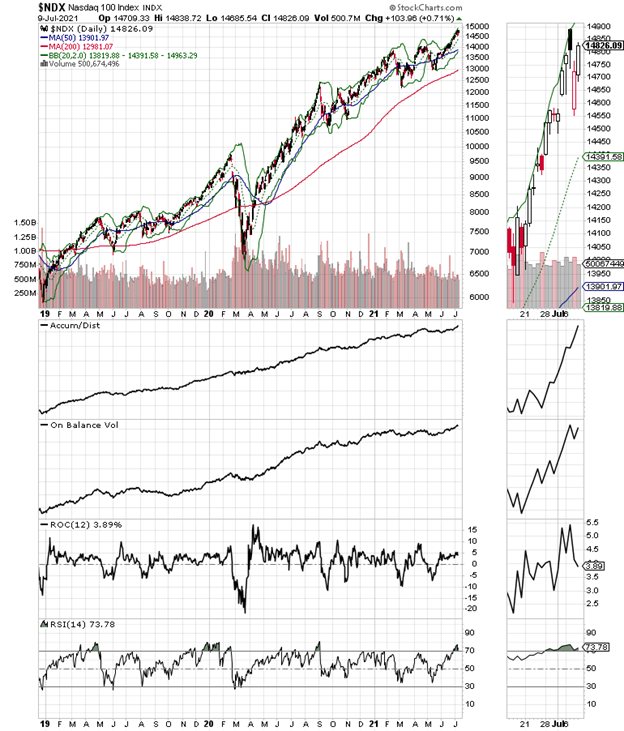 The Nasdaq 100 index (NDX) closed at a new high on 7/2/21 but did not fully recover from the beating it took on 7/8 and came up short on 7/9 while SPX made a new high. Accumulation/Distribution (ADI) and On-Balance Volume (OBV) remain bullish RSI remains well above 70, which keeps NDX overbought and suggests that some consolidation is in order in the next few days. 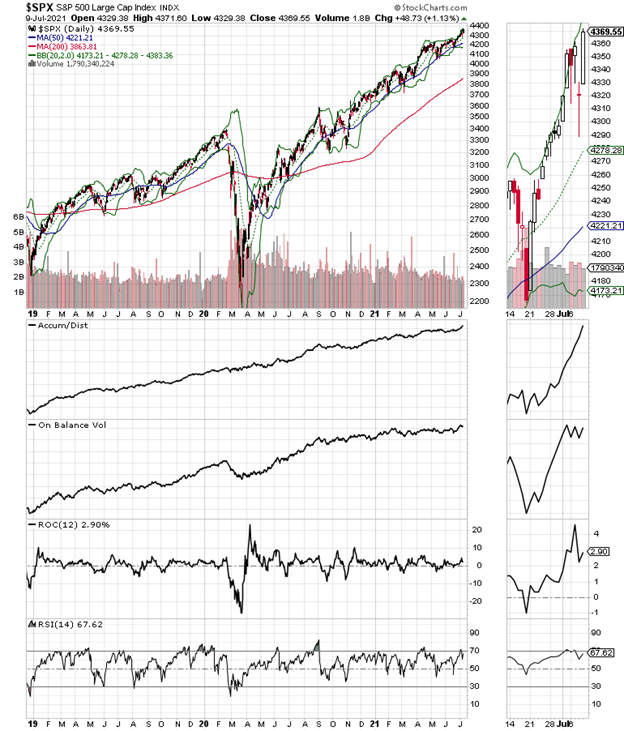 The new high on the S&P 500 is more likely to expand as its RSI is not quite overbought yet.