If You Are a Short-Term Trader, Respect Your Stops and Be Patient

Eight of the 11 S&P sectors finished higher for the week ending 07/09/21, states Bonnie Gortler of bonniegortler.com. 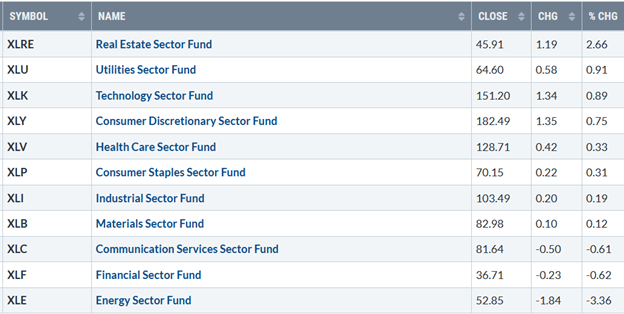 10-year Treasury yields fell, hitting their downside objective of 1.27%, (green arrow), its lowest level since mid-February before finally closing at 1.35%.  A further decline in the near term will likely attract more buying into growth stocks and put more downside pressure on financials and small-cap stocks.

Yields could fall to 1.20% in the near term and potentially go to 1.07% (Figure 1 in purple), the lower channel objective. On the other hand, a close above 1.52% would imply higher yields in the future.

Weekly market breadth was negative for both the NYSE and Nasdaq. The New York Stock Exchange Index (NYSE) had 1488 advances and 1977 declines. Nasdaq had negative breadth despite finishing the week at record highs with 1682 advances and 2883 declines.

On 3/25, the NYSE new lows peaked at 207 (orange circle) and immediately contracted (purple rectangle). On 5/11, new lows on NYSE jumped to 95, their highest level since late March flashing a warning sign, but new lows immediately dropped.

New lows jumped to 63 intra-week (purple circle on 7/8) but closed at 10 (green circle) after Friday's explosive rally, remaining in the lowest-risk zone, where stock prices tend to rise.

If new lows begin to expand and have a succession of days over 95 (the 5/11 high), this will imply more risk and a shift in trend. On the other hand, if they remain low, the odds favor the resumption of the rally.

No price is too low for a bear or too high for a bull. – Unknown 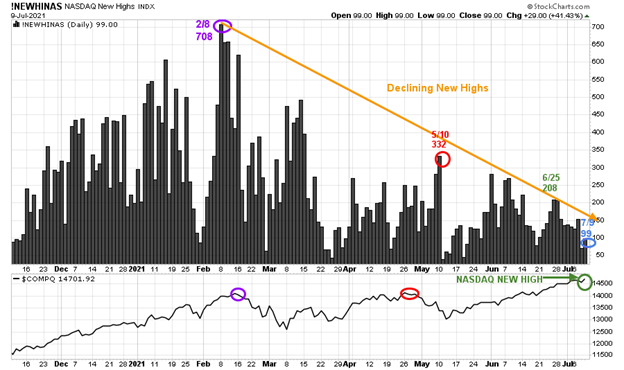 Despite the new high in the Nasdaq, stocks making new highs were only 99, continuing to contract and below the peak reading of 708 set on 2/8. Watch if new highs begins to increase or continue lower. If they can expand to over 332, this will be a clue of further gains in the near term and more stocks participating in the rally.  On the other hand, if new highs remain low, the Nasdaq rally will likely end sooner rather than later. 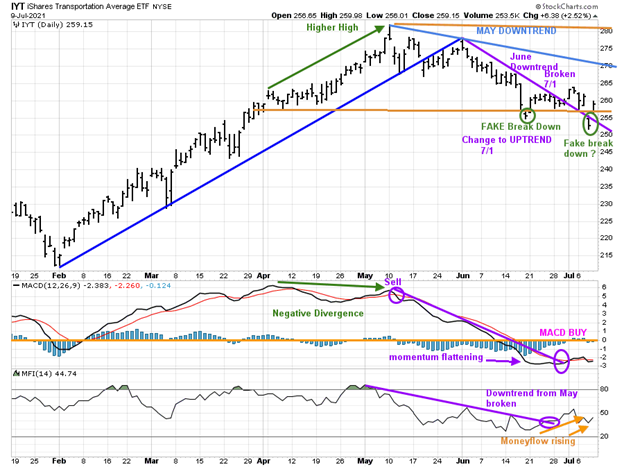 The top chart is the Transportation Average, which peaked in May. The June downtrend was broken (purple line), but the rally failed quickly after not penetrating the May downtrend.  Last week IYT fell below support for one day, a second false breakdown, before reversing higher on Friday.

It would be positive if IYT could begin to outperform the S&P 500 and close above 265.00 and then over 275.00, breaking the May downtrend. A close below 252.77 for two days would be bearish and imply an acceleration of the downtrend to potentially 230.00.

MACD (middle chart) is on a buy and above its May downtrend. The lower chart is Money Flow (MF). Its positive Money Flow broke the May downtrend (purple line) and is rising, despite the weakness in IYT.

Day-to-day volatility increased last week during the decline as VIX made an intraday high of 21.29 on 7/8. Buyers stepped in on Friday, and VIX fell sharply, closing at 16.18.

A close above 20.70 (6/18 close) would imply an increase in day-to-day fluctuations and a warning a correction is likely to begin. 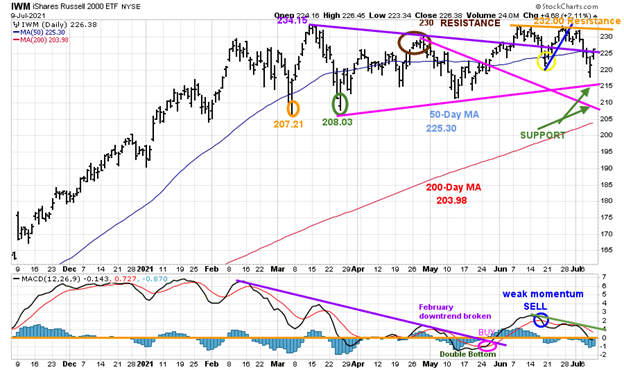 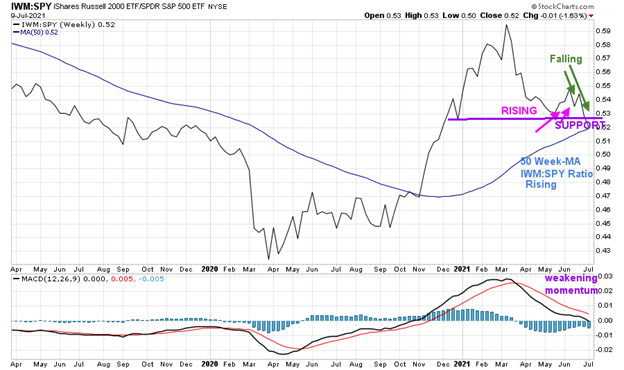 The weekly IWM /SPY ratio is flipping back and forth, now falling but remains above the 50-week moving average (MA), which continues to rise. However, it’s not a positive sign MACD is falling and making lows. I expect IWM to remain weaker than the S&P 500 until IWM is stronger than the S&P 500 (SPY). 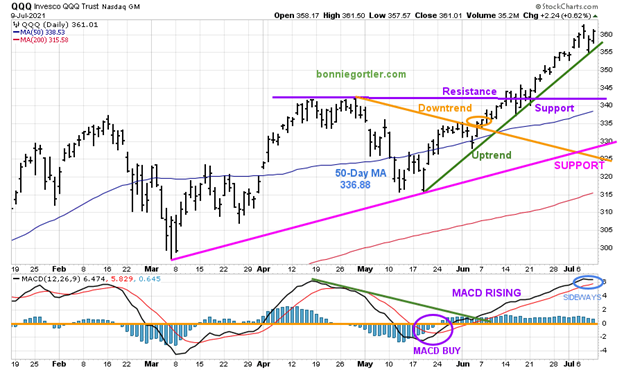 The top part of the chart shows the daily Invesco QQQ, an exchange-traded fund based on the Nasdaq 100 Index with its 50-day moving average and 200-day moving average. QQQ broke its May downtrend (orange circle) on 6/4 and is still in an uptrend. QQQ gained .4% for the week. The upside objective remains 370.00. A close below 350.00 would be a sign reaching 370.00 may not occur

A close below support at 327.50 would break the uptrend from March and increase the odds the decline will accelerate and test the March lows.

The bottom chart is MACD (12, 26, 9), a measure of momentum. MACD remains on a buy but is now moving sideways. Be alert if MACD starts to turn down and then generates a sell, implying that the easy money is over and increased risk the advance is over.

The top chart shows semiconductors. Semiconductors have risen since breaking their April downtrend (blue line) with an upside objective to 276.00.

The lower chart is MACD, a measure of momentum. MACD flipped to sell but holding above the downtrend from January (purple line). MACD made a higher high, confirming the high in SMH, implying another rally that appears to have started.  I recommend caution on any close below Thursday's low of 248.89.

Daily volatility is on the rise and market breadth continues to weaken. Momentum patterns continue to weaken. Fewer and fewer stocks are participating in the rally as the major averages make new highs. Global markets continue to lose strength compared to the S&P 500, no longer supporting the US market. Earnings season is starting with high expectations. If there is no follow-through to Friday's rally, a market correction could begin soon. If you are a short-term trader, respect your stops and be patient before adding to your investments, waiting for your ideal setup to form. The key closing numbers to watch for a major trend change are below 207.21 for IWMand below 327.50 for QQQ.