Are Mutual Funds Going to Fund the Market's Last Round Before the Fed Closes the Bar?

The race toward the Fed’s taper start deadline took an interesting turn last week, asks Joe Duarte of In the Money Options.

Just like the buying frenzy that often erupts during last call at a full watering hole before closing time, stocks rallied in a post-Fed meeting short covering rally last week. Indeed, it’s worth considering that given the recent surge in mutual fund money and the number of short positions left to cover (see options section below), that stocks could well rally into the end of Q3.

Still, if this scenario does play out and stocks do blow off in the next couple of weeks, as I describe directly below, it’s worth noting that every good party is usually followed by an equally bad hangover.

Unless the market’s playbook has been permanently rewritten and higher interest rates are no longer the bane for higher stock prices, the bull market may now be living on borrowed time. That’s because just a few days ago, Fed chairman Jerome Powell uttered what could be his most memorable phrase ever – “Moderation in the pace of bond-buying may soon be warranted.”

All of which, of course, amounts to the fact that the Fed is all in on tapering its QE and that the future is now full of unknowns and rising risk for stocks as well as the MELA system which is composed of the markets (M), the economy (E), people’s life and financial decisions (L), and the algos (A). Remember, stocks are the key to wealth building and financial decision making during periods of low interest rates. Thus, any event or trend that causes lower stock prices will cascade through the economy. Moreover, the algos in the market and in social media will accelerate the pace of events.

So why would anyone buy stocks when they know the Fed is going to reduce liquidity in the not too distant future? How about because they have to.

Consider this. Prior to the Fed’s announcement, money was pouring into mutual funds. Moreover, the tone in the options market was starting to turn bullish. Thus, it’s really not a surprise that fund managers, who get paid for buying stocks, are trying to make the most out of the limited time that they may have left in the longest bull market of all time by putting that mountain of new money to work before the Fed pulls the rug out from under them.

Is it a fool’s errand? Probably. But if your year-end bonus depends on how much money you put into the market before quarter’s end, then now’s the time to buy, especially if you’re buying with other people’s money. In other words, the odds of the market rallying into the end of Q3 have just gone up as the Fed won’t start tapering until November and mutual fund managers are bound to put their money to work until then in order to make their end of quarter results look as good as possible; and to maximize their bonuses.

Still, even though fund managers may put their money to work in order to garner their last big bonus before the Fed kills the bull market, the latest data shows that money flowing into mutual funds has already started to reverse. What that means is that the managers will likely run out of money faster than they expect, which of course is not likely to lead to a happy ending as the odds of a big air pocket developing in the market at some point in the not too distant future will likely increase.

Therefore, while we wait to see how things turn out it’s certainly worth reprising these sound trading principles:

There are still some stocks and option strategies which may yield sizeable gains when properly managed.

I recently recommended purchasing shares of Oklahoma shale giant Continental Resources (CLR) on its improving technicals and show of relative strength. But as time passes and winter approaches the stock could continue to improve on a situational basis. 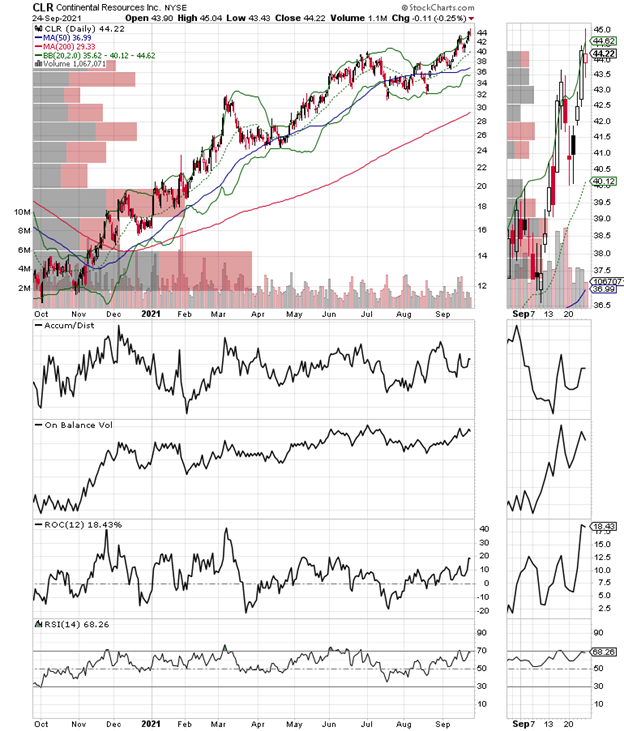 CLR shares took a beating after the White House reduced oil drilling on federal lands and on a governmental policy shift toward green energy in early 2021. But the reality is that given the damage to the Gulf of Mexico’s oil infrastructure during the recent hurricane season, persistent natural disasters, tightening European energy supplies, and forecasts for a cold winter, CLR with its vast shale deposits could be in a good position for profiting from circumstances.

Interestingly, despite the political headwinds, CLR has been improving its operations and has managed to deliver record setting free cash flow, to the tune of over $1 billion in the current fiscal year via streamlining operations and simultaneously reducing debt by nearly $900 billion. Moreover, the company has raised its dividend and has increased its share buyback program, with the latter helping to support the share price.

In other words, CLR is well positioned to withstand at least a moderately nasty bear market in energy while being positioned to profit in a bullish environment. Now, if oil prices continue to firm and demand rises, as it well may over the next few months, the stock should move decidedly higher. Accumulation Distribution (ADI) and On Balance Volume (OBV) are bullish at the moment as the price starts to move higher. And the RSI is nowhere near 70 which means the stock still has room to run. I own shares in CLR as of this writing.

SPY Options Hedged to the Hilt

It’s difficult to predict what will come of this situation in the options market other that what happens here will affect the stock market. All of which, of course, makes the continuation of the crash proofing that is evident remarkable.

Essentially put buyers have remain active just below the active strike price for SPY options. For example, if SPY has been trading at 450 put buyers have been increasing their activity at 449 in order to prevent major losses if the market breaks down to that level. What this does is create a market that goes nowhere and continues to churn until there is massive selling which prompts more put buying and index futures selling to hedge the put sales that are the other side of the put buy trade.

And while this pattern was reversing some over the last few weeks, it’s back in full swing and actually seems more aggressive. In other words, when the sellers eventually gain the upper hand the market is likely to go down hard and fast.

The New York Stock Exchange Advance Decline line (NYAD), the most accurate indicator of the stock market’s trend since 2016, bounced last week but once again failed to close decisively above its 50-day moving average while the RSI indicator for NYAD remained below 50. Thus, technically speaking, we are in sell signal territory. 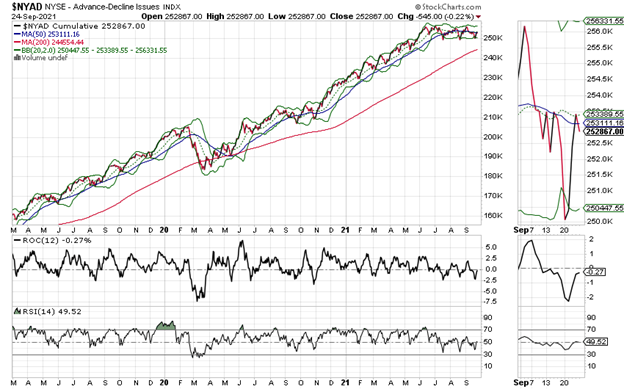 And yes, the sell signal is still reversible with one or two strong days as long as NYAD makes a new high. But the longer it takes for a meaningful reversal, the worse it will get for stocks. 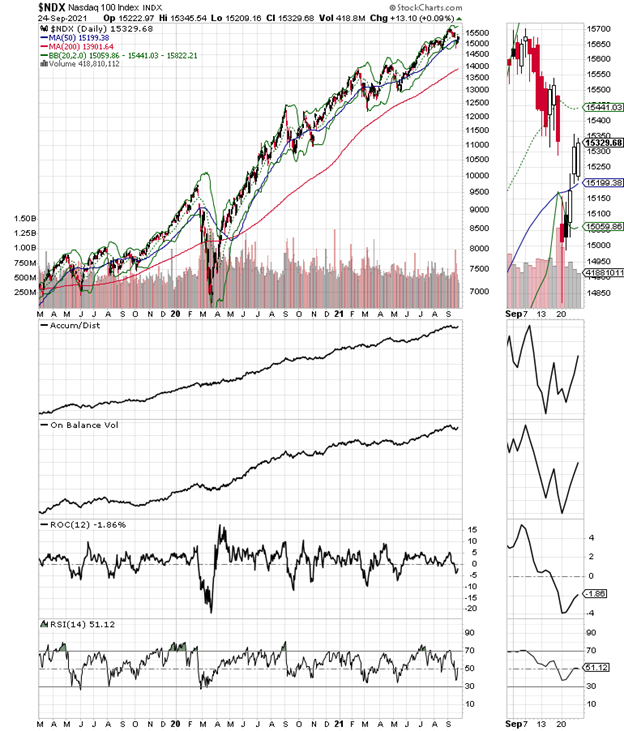 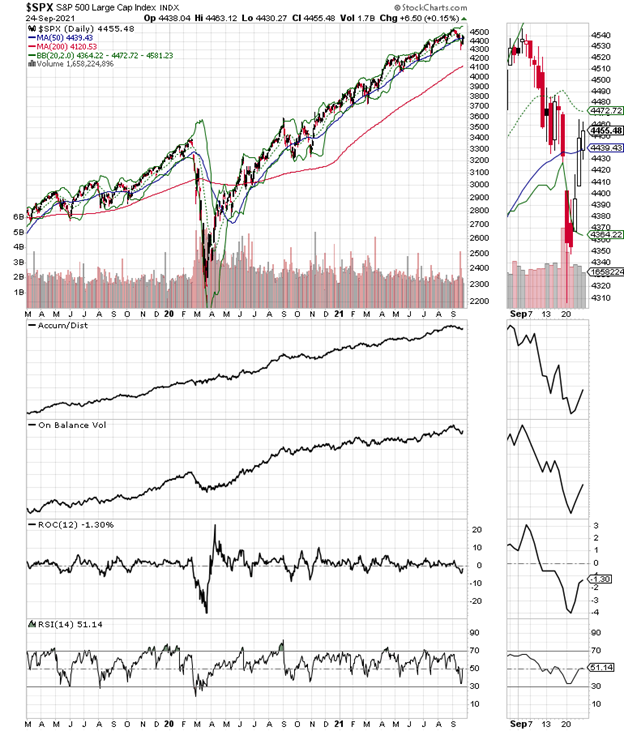 In addition, the S&P 500 (SPX) closed the week above its 50-day moving average as while showing improvement in Accumulation Distribution (ADI) and On Balance Volume (OBV).