How to Survive the Next Crash 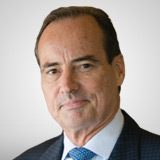 It may not be pretty, but Harry Dent has some simple advice for those looking to protect themselves once the stimulus stops working and debt overwhelms the economy.

Today we're joined by Harry Dent talking about global economic stimulus. Now Harry, where do you see the stimulus either succeeding or failing?

Well, first of all, it has succeeded in stopping the biggest meltdown since the Great Depression. Demographics are pointing down, debt levels are at the highest levels than at any time in history, so that was causing a meltdown like the early 30s.

Stimulus kept the banks alive. I basically gave trillions of dollars to the banks so they didn't have to fail or not be able to meet deposit runs and stuff like that-which was already happening, little deposit runs in parts of Europe.

So the question is, can it keep working? The truth is, stimulus is like a drug. It takes more and more to get less and less effect until the side effects of the drug kill you. This is already true in Europe.

Europe just did a massive QE called LTRO. $1.3 trillion. Bigger than our QE2. Months later, it's already in trouble again. It's showing that the stimulus is not lasting very long. So I think it's going to start in Europe.

Spain has the biggest real estate bubble. There's no way to turn around Spain, and now Germany and ECB are saying we're going to bail out Spain. I thought they'd never do that. So I think Europe blows up in the next several months or a year. That will spread to the US. Our downturns hit China, which is the big manufacturing and export machine of the world. That hits all the commodity exporters and we get a worldwide downturn in the next two to three years.

So I'm sure anybody listening to this today is thinking oh no, what do I do?

Well, here's the thing. This is a deflationary period. We have not seen this in our lifetimes. We saw inflationary recession in the 70s. In deflation, big bubbles in debt and assets burst, which means everything bursts.

Look at 2008 with the last crash. Real estate went down, commodities-even gold and silver-stocks, US, Europe, emerging countries, small cap, large cap...everything went down except the US dollar and the safest bonds like US Treasuries and German Bunds.

So there's not much place to hide. Cash and cash flow safety is king. You let the bubbles burst usually 50%, 60%, 70% and then you buy like Joseph Kennedy in the early 30s. You buy at the bottom and make fortunes.

Here's the trick: People think well, if I'm in safe bonds or cash, I'm not making any money. Everything's falling. You are making money because you can buy 20, 30 cents on the dollar on the other side in just a matter of years...so it's cash and cash flow.

Now, one thing that happens very often to individual investors is picking the wrong times to buy and sell. How should people manage that?

It's impossible to pick bottoms perfectly, and we'll always give our best advice...but in the short term, everybody's making good guesses. In the long term, demographics tell us clearly where things are going. We predicted this downturn 20 years ago just from baby boomer spending that we can project in the future. So the short term's difficult-buy low, sell high.

5 Stealthy Stock Trends to Jump On

The Week Ahead: Be a Smart Buyer