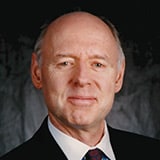 C. Bruce Johnstone is legendary for his all-encompassing knowledge spanning growth and income and domestic and international equities. Now  managing director of Fidelity Investments, he began his career at that firm in 1966. As manager of the Fidelity Equity Income Fund from 1972 to 1990, Johnstone was the #1 equity income fund money manager for that 19-year period. Here's his latest outlook.

"Any decent stock market rests on a foundation of certain pillars. The first pillar is rising corporate earnings, and in this case, we have a bad news, good news, bad news situation. The bad news is that in recent years, we have seen the worst earnings declines since the Depression. The good news is that we are at the beginning of an economic recovery and we’re going to get terrific corporate profits for the next 12 to 18 months. But the bad news is that normally coming out of a recession, the consumer has pent up demand. Not this time. The consumer has been spending on autos and housing, so this time around the consumer is satiated. So we’re going to get a very significant pop in earnings over the next 12 to 18 months, but after that, I expect below-trend growth.

"The second pillar is benign inflation–low interest rates and plenty of liquidity. This is a very positive backdrop. The negative, however, is that the Treasury bubble has burst. With the backup in yields, refinancing has totally collapsed. Refinancing had been a huge stimulus, and we’re probably near the end of that. The third pillar is reasonable valuations. We’ve had a significant compression of multiples since March 2000. The problem, however, is that stocks are not cheap and valuations are still on the high side. We’re cheaper than we were, but we’re not back to what you would consider cheap. So I’m neutral on valuation–the third pillar.

"I’d also point out that speculation–which we saw in the late 1990s–unfortunately has returned. So if you’re thinking about being fully exposed to the stock market, I’m not sure this is the best time. Likewise, the stocks that have done the best this year are the ones that aren’t earning any money–a worrisome sign of speculation. Finally, there is world event risk–the biggest risk being war and terrorism. If there is another terrorist event in the US it clearly would affect growth of GDP and the growth of earnings, and the valuation put on stocks. You cannot ignore this possibility.

"If you don’t want to have all your money in US stocks, there are other possibilities. There is a long list of products that we buy in the US that are made by foreign companies. We fill our houses with them–everything from watches to cell phones. And yet, we don’t buy the stocks of the companies that make all these products. The typical US individual investor keeps only 3% of their asset allocation in international investments. Even the top 200 pension plans have only 16% in international equities. And yet, 46% of market capitalization is non-US. In my own retirement plan more than half of my equity assets are in non-US equity funds. That’s how strongly I believe in this kind of asset allocation. You can have superior growth outside the US. The demographics in many parts of the world are better in terms of entering the high-spending, high-savings, high-investing years. You have many more unmet needs outside the US than you do here. The savings rates are higher, the credit card culture is growing, and there are lots and lots of places around the world that are growing–and are likely to grow–faster than we are.

"Think about where the profit potential is. Company A has wage rates of a buck an hour while Company B down in these industrialized countries has wage rates of $20 an hour. Who has greatest profit margins? Who has the greater potential to reinvest in their company and in their country? This shows why outsourcing is going to continue. We’re still in the early stages of this phenomenon. It is going to drive the growth rate for much of the world towards a higher growth rate than we have here in the US.

"And you’re not paying up for leading global stocks. These stocks are where they were 10 years ago. These are not expensive stocks. This is an opportunity still to get in, diversify, and reduce risk because you’re not paying ‘up’. And if you look at relative valuations, they’re also cheap. I’ve looked at all the typical traditional valuation measures, such as price-earnings ratios, price-to-book, cash flow, and dividend yield. When you compare market regions around the world versus the US, you find you have a lot of cheap places to invest around the world. So you have cheap absolute prices. You have cheap relative prices. You get lower risk through diversification. You get better potential growth rates. That’s why I have a significant hunk of my money outside the US."

In a special report recently published by Forbes , C. Bruce Johnstone discussed his retirement portfolio, citing his personal holdings: "In terms of managing my own retirement plan, I put my money into three general categories: high yield securities, US stocks, and non-US stocks. I invest in three or four funds in each of these three categories. That's enough to cover the waterfront, that is, to be well-diversified and yet have a lot of exposure to key areas of the market. In my retirement portfolio I own a lot of Fidelity Capital & Income Fund (FAGIX), which is in the high securities area. In the US area, I tend to favor small caps. I've got the Fidelity Small Cap Independence (FDSCX) and Fidelity Small Cap Stock (FSLCX ). And in the non-US equity area, I've got  Fidelity Diversified International Fund (FDIVX ), and  Fidelity Emerging Markets Fund (FEMKX )."