Has the Bond Market Topped? We Mean it This Time!

The seasonal window to short equities and to buy bonds is closing quickly, which may mean we have seen the top of the bond market, writes Jeff Greenblatt.

If I’m going to be wrong, I don’t mind being wrong on an extreme lower probability. We’ve discussed the fact that according Jeffrey Hirsch, the SPX had been down 23 out of 29 post September triple witching seasons to the end of October. Now its 23 out of 30. That means for the six-week period after the September seasonal change point (in my work) to the end of October the SPX has been down 76.6% of the time over the past 30 years.

This year has certainly been an outlier given the Fed continues to inject more than $100 billion into the system every night and this will continue at least until January. It was supposed to be over by now. I remember when this was first made public at the September Federal Reserve’s Open Markets Committee (FOMC) meeting. When the Fed intervened, the overnight rate hit 10%. Given that it’s supposed to be around 2%, do you think there’s a good chance the markets would’ve been clobbered if the Fed waited until after the fact?

I don’t have to tell you we are living in historic times and financial markets are not excluded. The takeaway is with November, the market seasonality factor changes. We are no longer in the statistical graveyard for stocks. That shipped sailed. We are only a handful of weeks away from the holiday season and stocks almost never make a big move to the downside from Thanksgiving to the end of the year. So, there is still a small amount of time for a shake of the trees. On Wednesday stocks were flat and a little euphoria came out of the balloon when it was announced the meeting between President Trump and Chinese President Xi was being delayed due to terms and venue. This is not a surprise as the entire process has been a series of false starts and empty rumors of progress.

The chart of the week is the weekly 30-year U.S. Treasury bond. The bond market peaked after a 36-year bull run. Oddly enough, we might see a rotation out of bonds into the stock market given the switch in seasonality. The long bond is set up to drop. Using our Gann square of 9 methodology the difference in terms of high to high is 67dg to a price point in the 167 handle. This is 164 weeks. There are other deeper readings that make this pivot a high probability candidate to be a secondary high, least of which it is wrestling with the top of the long-term Andrews channel. 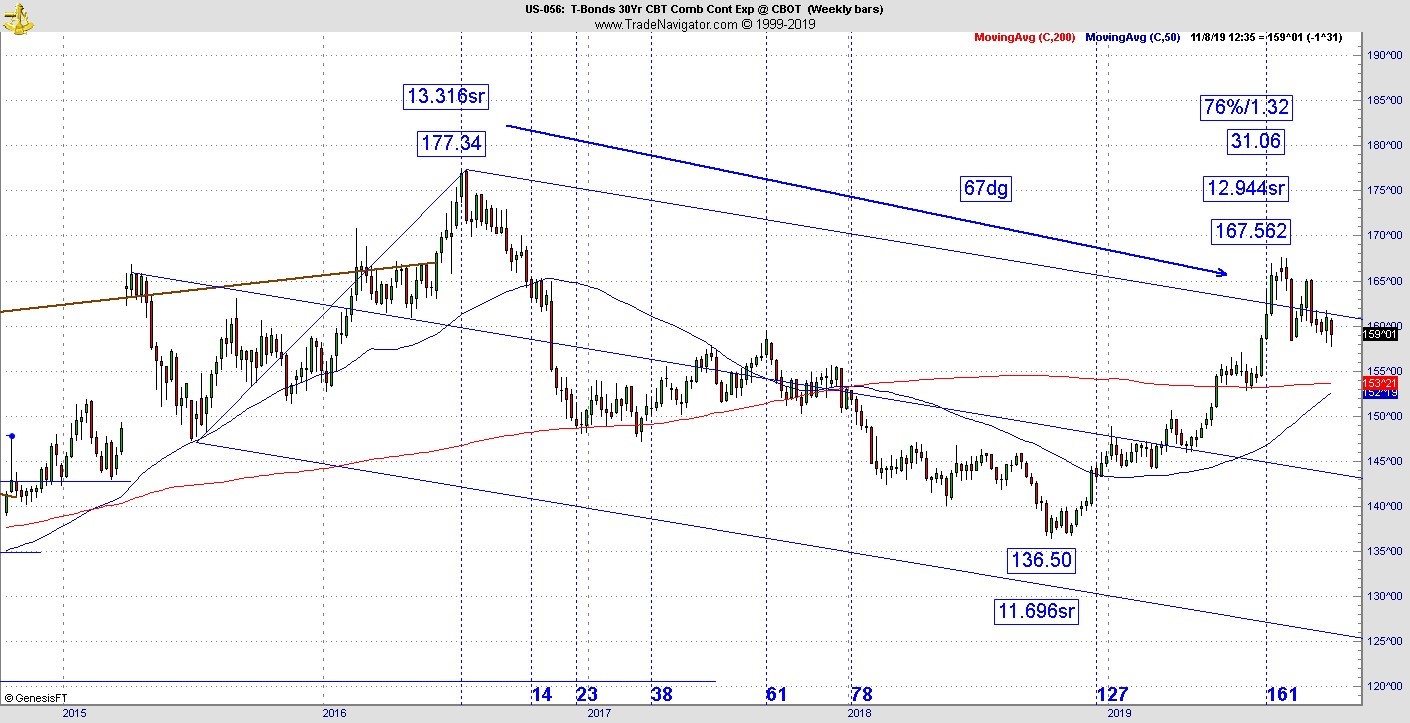 What are the implications of a reversal in the bond market? As much as the Fed is fighting to keep interest rates low, the long end of the market is going to fight it. It was only a year ago rates spiked, and everyone saw what happened to the stock market. As we know, last year was still inside the favorable side of the four-year presidential cycle.

Now the winds are blowing in the opposite direction. Obviously, rates won’t be spiking much anytime soon as they are not even close to last year’s levels. The headline usually won’t react until it gets to a late stage anyway. But for now, what we need to do is watch whether price action gives up the high end of the channel line. That would be the first indication something has changed. Then we’ll be back in a confirmed downtrend with a secondary high already in place. If we do get this turn, those Elliott Wave aficionados will realize the bond market would be on the cusp of a 3rd or C wave to the downside. If that were to happen, the likely result would be a move below last year’s low. Nothing is guaranteed but the higher probability here is for the bond market to consolidate for a while but ultimately give up the top of the channel line.

Elsewhere, precious metals have remained in a tight range since the beginning of October and the US Dollar is pushing back against its good Kairos reading peak after a decent leg to the downside.

Since it’s true this year has been an outlier for the September/October period, it’s also true the risk for a Black Swan remains higher than usual due to the political intrigue in Washington. The risk for impeachment and removal by Senate trial remains high. The common wisdom is there is no way the GOP Senate would convict if there is a trial. If they get to the point of a trial, put me in the camp the Senate will convict.

If that were to happen, world markets will tumble as the lesson from history is markets will not be able to sidestep this historic event. What are the chances all this will happen? At this point its likely 50-50, which means risk remains too high for comfort. But it is not likely to happen before the end of the year. For now, enjoy the season, watch out for a shake of the trees and keep an eye on the bond market.