Will Apple Lead the Market Lower?

Can you name the biggest stocks in the U.S. markets? It probably won’t take you long to pick out the highest market cap companies, with well-known names like Apple (AAPL), Amazon (AMZN) and Microsoft (MSFT).

What’s interesting is that the five largest U.S. companies, and several others near the top, are all primarily tech companies. They are also all listed on the Nasdaq exchange. It used to be the New York Stock Exchange held all the biggest names, but that’s no longer the case.

In fact, if you are looking to focus on mega-cap stocks in your portfolio, you are probably better off buying the Nasdaq 100 Index or its ETF, Invesco QQQ Trust (QQQ) rather than the Dow Jones Industrial Average index. The Dow 30 is actually missing several of the top stocks from the QQQ component list.

Like the Dow, QQQ can be impacted greatly by big swings from its largest holdings. The top five most heavily weighted stocks make up more than 40% of the index, with AAPL topping the list at over 11%.

So, when Apple recently announced that it would be cutting revenue guidance due to the impact of the Coronavirus, you could anticipate selling pressure on the QQQ as well. However, with AAPL down 2% on the day after the announcement, QQQ was actually flat on the day.

Nevertheless, larger moves sometimes take a while to develop. Apple’s announcement could be the tip of the iceberg in regard to negative revenue effects from the virus. We may yet see several more downward revisions in the days to come. 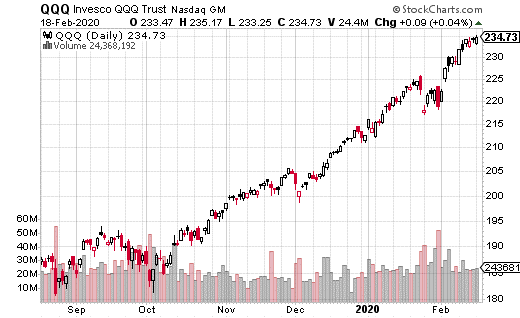 As you can see, QQQ has been on a tear for the last several months. However, a large put spread in March options could be a sign that the ETF isn’t going to remain quite so elevated over the next month.

A trade like this is generally used as a hedge against a portfolio of stocks. In this case, that portfolio would be tech-heavy. On the other hand, it could also be a straightforward bearish bet on the Nasdaq 100, possibly due to the market being spooked by the AAPL news. This trade would also be relatively easy to replicate in your own portfolio.

If there one company that benefits from a stay at home order across the country and world it is Amaz...

Rapid Testing Could Give a Boost to Quidel
17 hours ago

Joining the fight in the coronavirus pandemic is Quidel (QDEL); the company offers a number of rapid...

Recent stock rebound may be opportunity to recalibrate portfolio into gold, treasuries and safe mone...