The tech mania was arguably the most intense since the Roaring Twenties debacle when stocks eventually wound up crashing 90%, notes Alan Newman, marketing timer and editor of CrossCurrents.

In 2000, prices soared so far out of line that I was  comfortable forecasting Nasdaq would crash by 35% in only six weeks. Tech stocks peaked a week later and collapsed by one-third by mid-April. The broader S&P 500 eventually gave up half its value.

While the 2007 stock peak was not as intense, the housing bubble created an atmosphere in which participants were emboldened to bid up stocks to ridiculous extremes and stocks eventually collapsed by one-half.

A significant hallmark of all three manias was the element of leverage. One the way up, leverage is wonderful to behold, enabling demand upon demand and a path to riches.

However, as history clearly illustrates, leverage is far more awesome in reverse as the unwinding of debt leads to cataclysmic waterfall declines.

In the chart below, the 2% “danger signal” was something we concocted many years ago, after seeing total margin debt peak around 2% of market cap in 1987, just before the Crash. 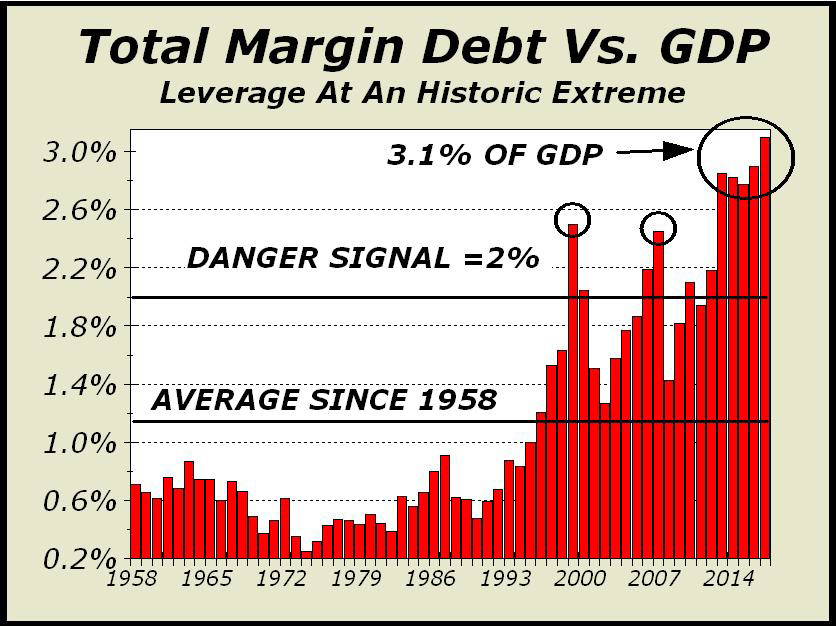 Since 2010, every year has been above the 2% level. More importantly, we began measuring total margin debt versus GDP during the tech mania and believe it is a vastly more significant measure; better able to detect periods of excessive leverage.

Obviously, the fallouts after the 2000 and 2007 peaks tell the story well. Prices fall, leverage contracts, which leads to prices falling further and additional unwinding of debt. This cycle may be accompanied by an economic recession, which reinforces the cycle.

That’s how stocks can fall 50%, far more than the typical bear market. We expect no different from today’s very excessive leverage.

Given the record breaking extent of leverage, when prices inevitably crater, an ensuing economic recession is liable to be quite severe, possibly as bad as we witnessed in 2008-2009.

The persistence of stock gains has enabled a new generation of Polyanna Wall Street professionals; there is seemingly zero recognition of a longer past, where fearsome bears once roamed.

The tech mania peaked fully 17-1/2 years ago. A young professional now entering the financial world at 25, was in second grade when the tech mania began to rapidly unwind in March 2000.

Since the stock market has obliterated every record on the way up since 2009, there is little sense of history. For the most part, it is all forgotten.

This abject lack of history has enabled the worst kind of optimism; not the kind that believes prices will go up forever but the kind that pays no heed to nor fear of price declines, which are all treated as buying opportunities. This is what enforces and reinforces the strategy of leveraging to the max.

The market capitalization of Facebook (FB), Amazon (AMZN), Microsoft (MSFT), Apple (AAPL) and Alphabet (GOOGL) increased $200 billion in just one day recently in one of the most stupendous displays of manic behavior this observer has ever witnessed.

This is so far in excess of the blatant stupidity of the Nifty-Fifty era when 50 stocks were considered to be only one possible decision — buy and never sell. That era ended in December 1972 and the S&P 500 collapsed by 50% over the next two years.

The U.S. stock market continues to shatter records and show unmistakeable signs of manic activity, perhaps to a far more significant degree than in the tech mania of 1999-2000 and the combined housing and stock bubble of 2007.  As of the end of September, total margin debt climbed to over $600 billion for the first time, ending the month at $606.33 billion, an amount equivalent to 3.1% of total GDP and again, at record levels. We still see our bear market target of Dow 14,719 as a legitimate scenario.

Major Move Possible in Stocks as Election Nears
1 hour ago

The tension in the stock market is palpable but with shifting polls, the odds of a stimulus deal bei...

Fear a Bear Market
1 hour ago

Headline risks are everywhere, much like bloated credit card statements in January after a holiday s...