The S&P 500 has extended its record-long expansion, but the growth in earnings today may not be as good as it seems, cautions Jim Stack, money manager, market historian and editor of InvesTech Research.

S&P 500 Operating Earnings have increased significantly and have helped fuel the 50% gain in the S&P 500 since mid-2016. On the other hand, Corporate Profits, which measures what all U.S. corporations earn, peaked in 2014 and is lower today than it was in 2012!

The reason for this discrepancy has largely to do with different accounting methods. Corporate profits are primarily calculated using tax accounting while S&P 500 earnings use financial accounting.

The methodology used to calculate corporate profits is more reliable for many reasons, including the fact that the Bureau of Economic Analysis adjusts for non-reported and misreported income.

Moreover, financial accounting can be more easily manipulated, and the management teams of large public companies take full advantage of this fact. 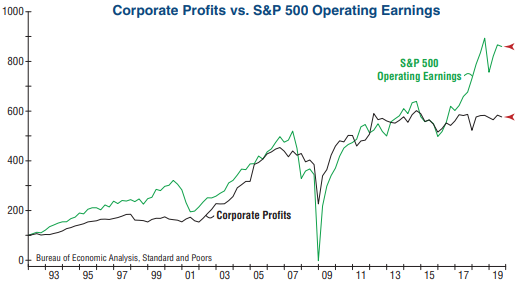 The current divergence bears a worrisome similarity to the Tech Bubble of the 1990s. The S&P 500 has a current P/E ratio of 24.6, which is in the 91st percentile of the last 92 years.

But taking into consideration the fact that today’s earnings have almost certainly been manipulated higher (which skews the P/E ratio lower), it becomes clear this is one of the most overvalued markets in history.

It’s also noteworthy that S&P 500 earnings are expected to contract by -2.0% in the fourth quarter of 2019, demonstrating that the most recent rally has been driven more by sentiment than fundamentals.

The dangers in this market are unmistakable, making it more important than ever to adopt a diligent risk management approach.

The ‘smart money’ market participants also seem to be aware of the questionable fundamentals of the most recent rally. Margin debt, which represents money borrowed to purchase stocks, ticked up in the latest reading but remains near the lowest levels of the past few years. 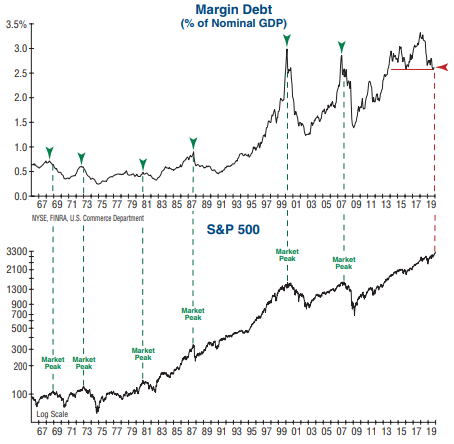 A steep decline in margin debt has historically preceded or coincided with major market downturns. While the slowdowns in 2011 and 2015 were accompanied by declines in margin debt, the indicator subsequently rose in support of the market during its respective rebounds.

Today, this condition has not been met, and as such, continues to be an area of concern. A failure of margin debt to move higher as the market continues to hit new all-time highs may be an indication that this bull market is on its last legs.

Meanwhile, moral hazard is situation in which one party becomes involved in a risky event or investment, knowing that it is protected against the risk, as the other party will bear the cost or ensure against it.

There are numerous times in the past when the Federal Reserve has really messed up! And it is surprising how many of them ended with extraordinarily painful consequences.

The ever-increasing inflationary cycles of the 1960s and 70s were a direct result of over-accommodative money supply expansion whenever the economy started tumbling into recession. The excessively deep and prolonged recession of 1981-82 became necessary to break the ingrained inflation psychology of that period.

The Tech Bubble of the late 1990s came immediately after Federal Reserve Chairman Alan Greenspan warned of “irrational exuberance” on Wall Street in December 1996 — but then failed to do anything to prevent it.

Likewise, the Housing Bubble of 2005, and subsequent 2008 Financial Crisis, would have been much milder or even nonexistent if the Federal Reserve hadn’t dropped interest rates to artificially low levels (under 1.5%) and kept them there in 2002-04.

It was the ultra-cheap money that compelled banks and lending institutions to create the nonsensical mortgages that turned into the collateralized securities and credit default swaps which collapsed like a house of cards — taking the entire economy down with it.

At the height of the 1990s Tech Bubble, the majority of investors honestly believed we were in a new paradigm era in which nothing could go wrong… and if it did, the Fed could step in to prevent it.

Likewise, during the Housing Bubble, speculation was running rampant in the belief that housing prices could never go down. Or if they did, the Federal Reserve could step in to save the day.

These are both prime examples of a historic moral hazard in which investors, home buyers, and speculators took excessive risk in the deeply held belief that profits were guaranteed, and the Fed had their back. In other words, the risks would never have been taken if not for the implied assurance from the Federal Reserve.

Now, flash forward to today and it has clearly turned into the “silly season” in higher risk assets — from overvalued stocks to overpriced real estate (again!), and particularly in low quality corporate debt. Instead of having a single big bubble, there are multiple bubbles of dangerous proportion lurking in the shadows.

And the Federal Reserve has injected a moral hazard into all of them in 2019 with its implied guarantee of support and assurance against loss. One can only guess where the fallout will occur, or the severity of consequences, when the next recession strikes.

If there one company that benefits from a stay at home order across the country and world it is Amaz...

Rapid Testing Could Give a Boost to Quidel
17 hours ago

Joining the fight in the coronavirus pandemic is Quidel (QDEL); the company offers a number of rapid...

Recent stock rebound may be opportunity to recalibrate portfolio into gold, treasuries and safe mone...