Traders in both Japan and the UK were out of their offices for bank holidays today, leaving lower liquidity conditions across global markets. While the absence of a major global trading hub or two usually passes uneventfully, it can lead to outsized moves when there are unexpected market-moving developments, and President Trump’s threat to ramp up tariffs on Chinese goods certainly qualifies in the current environment.

Reportedly frustrated with the lack of progress on technology transfer law, President Trump vowed to increase import taxes on $200 billion of Chinese goods, from 10% to 25% on Friday. For a market that had been pricing in an imminent resolution to the US-China trade tensions after weeks of “productive” talks, Sunday’s tweet caught traders off guard. All major Asian equity indices closed lower on the day, highlighted by a sharp 5.6% drop in China’s Shanghai Composite.

The fears spilled across the Pacific, with U.S. index futures trading off by more than 2% at points, but the losses have narrowed since U.S. trading began, with the S&P 500 shedding less than 1% as of Monday afternoon. The price action so far today suggests that traders believe a deal is still probable, albeit marginally less likely.

In any event, both the fundamental and technical backdrop for the S&P 500 remain bullish. As my colleague Fawad Razaqzada noted last week, Q1 earnings season got off to a strong start, with nearly 80% of S&P 500 companies beating earnings estimates and 60% beating on revenues (we’ll review the earnings season as a whole next week, after 90%+ of companies have reported).

From a technical perspective, the S&P 500’s bullish trend remains intact. Despite today’s gap lower, the index remains in the middle of its recent bullish channel, above its upward-trending 50-day moving average. Both the MACD and relative strength index (RSI) indicators are in their own bullish ranges, suggesting that the uptrend is still healthy: 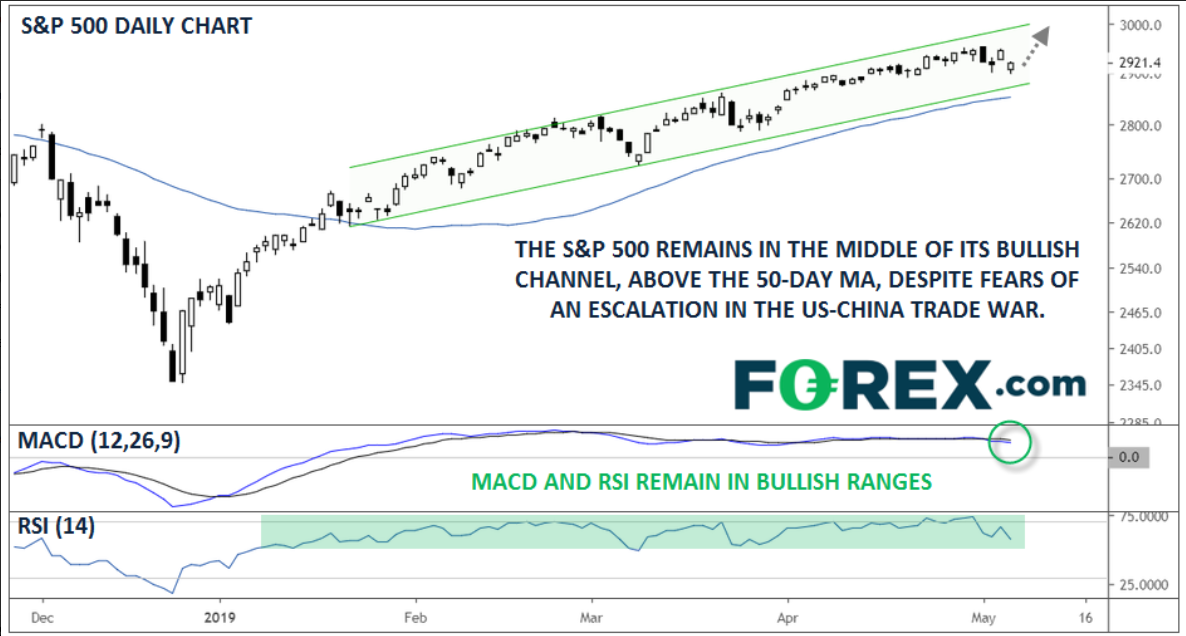