Did you hear about China’s hypersonic missile test last summer? It circumnavigated the world before impacting the ground a mere 19 miles from its target back in China, notes Sean Brodrick, editor of Wealth Wave.

Worse yet, China’s hypersonic glide vehicle could evade U.S. missile defense. And now we hear Russia is joining the hypersonic club. Putin claims Russia will have a fully operational sea-based hypersonic weapon in service sometime in 2022.

Considering these developments, the Pentagon is scrambling. All the uncertainty is spurring the Pentagon to up spending on hypersonic systems — offense and defense — to a reported $3.8 billion next year.

A lot of that money will go towards research and development of a “glide phase interceptor” ... a hypersonic vehicle that would be guided by a constellation of satellites and sensors to intercept an enemy’s hypersonic missile as it glides towards its target.

Any of these companies are worthy recipients of investment dollars, but it could be difficult to pick which one emerges as the winner of the hypersonic missile race:

A potentially safer bet, and one that exposes investors to a basket off defense stocks, is the iShares U.S. Aerospace & Defense ETF (ITA), which holds all three of the aforementioned companies among other defense stocks. 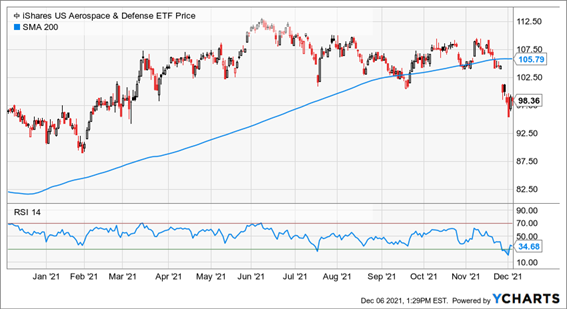 Despite its price recently tumbling well below its 200-day moving average, it is testing critical support around $97. And the relative strength index (RSI), a technical indicator, shows that shares just broke above 30 — where stocks are considered “oversold.”

As always, make sure you conduct your own due diligence before entering any position. But no matter which way investors play it, the profits here could be hypersonic.