Corporate credit has risen by 82% since the last market meltdown, which was caused by a credit crisis, reports Mike Larson.

It’s out there lurking; festering and spreading.

I’m talking about rot behind the walls in the credit market. Not many analysts and investors have caught on, yet. But it’s undeniable, and deadly serious. And if you’re not careful, it’ll be coming for your portfolio next!

Look, if you’ve been following my work for the past couple of years, you know I’ve been incredibly worried about ballooning debt levels.

But not mortgage debt, like in the last cycle. This time around, it’s corporate debt that has me worried. That’s because this time around, companies have been the worst offenders rather than consumers. They’ve been borrowing trillions of dollars in the bond and loan markets, and they’re now buried under a mountain of debt that puts Everest to shame. 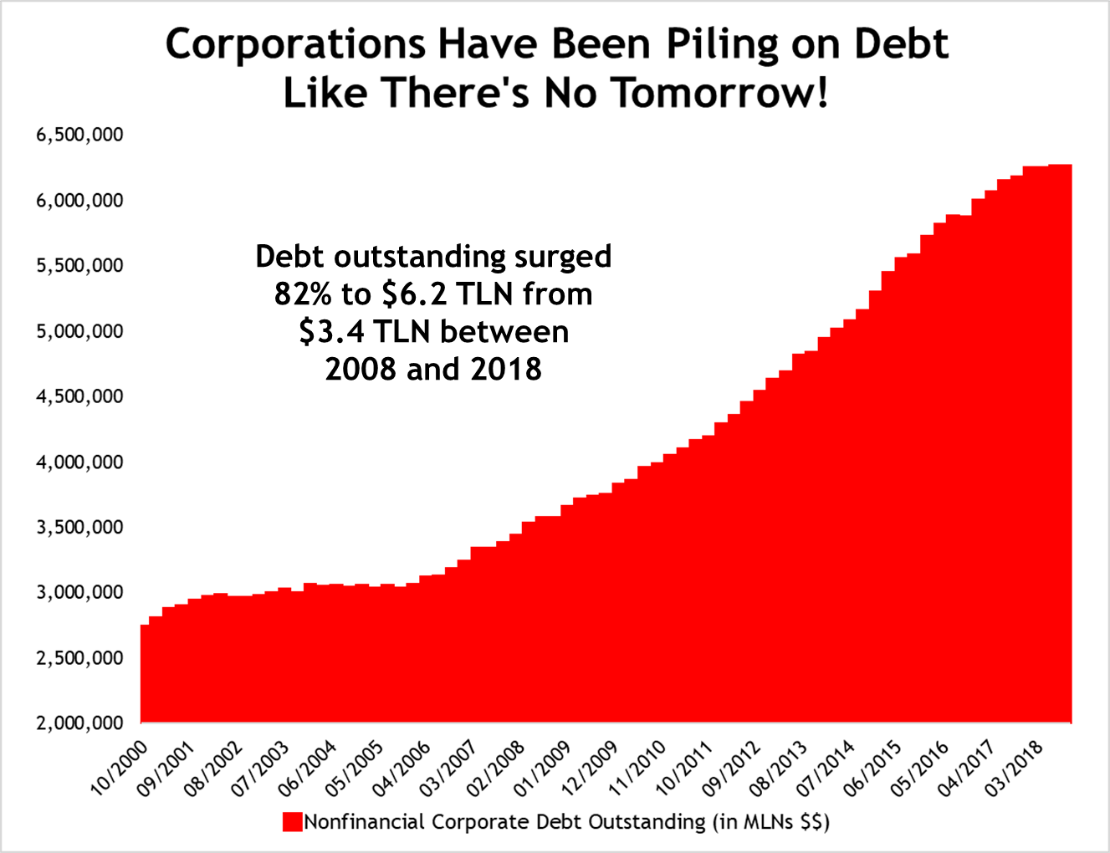 But now, the economy is slowing. Geopolitical tensions are rising. And delinquencies and defaults are beginning to climb. Result: Investors and lenders are starting to balk at funding the riskiest bonds and bundles of loans.

The article zeroes in particularly on CCC-rated debt. If you know anything about the credit ratings scale that companies like Standard & Poor’s and Moody’s Investors Service use, you know that CCC-rated paper is some of the riskiest stuff out there. Bonds rated that low default at much higher rates than bonds in the B- and A-rated buckets.

Well, an index tracking those bonds is dramatically underperforming higher-rated bonds this year. A couple hundred billion dollars’ worth of lower-rated bonds and loans are now trading for as little as 80¢ on the dollar, or less.

This is a sign investors are unloading this junk paper as fast as they can.

At the same time, S&P Global Ratings recently noted that its ratio of ratings downgrades to upgrades is skewing heavily to the downside. In fact, it hasn’t issued this many downgrades relative to upgrades in a decade!

As I’ve noted many times in the past 18 months, the debt markets keep failing to confirm attempts by the stock market to hit — and hold — modest new highs. All of this proves that yes, there is rot behind the walls, and it’s not going away. It’s getting worse.

In other words, if you’re just watching the S&P 500, you’re not getting a complete picture of what’s going on out there.

My advice? Stay away from higher-risk junk bonds, and the exchange traded funds (ETFs) and mutual funds that invest in them. That would include things like the SPDR Bloomberg Barclays High Yield Bond ETF (JNK) and iShares iBoxx $ High Yield Corporate Bond ETF (HYG).

If this credit rot really starts to spread —and I expect it will — the broader bond and stock markets could be facing serious trouble down the road.

You can check the grades on YOUR stocks at the Weiss Ratings website: www.weissratings.com. You can get specific names, and actionable “buy” and “sell” signals by subscribing. Subscribe to Safe Money Report here…

In recent days, there has been unusual options activity in iShares Silver Trust ETF (SLV)....

Our Top Pick for conservative investors is an exchange-traded fund that benefits from a rise in the ...

There are many securities on the market that can pay dividends every month, though not as many are e...

Esports not only allow video game enthusiasts a chance to compete against each other, they have beco...