U.S. Dollar Peaking? How to Watch for Sell Signals

My suspicion is that DXY is peaking, or already has peaked at 95.65, especially when the post-February price action is overlaid on my daily RSI and MACD momentum gauges, which reinforce evidence of upside exhaustion ahead of a downturn, writes Mike Paulenoff.

Now that POTUS has weighed directly into the currency manipulation issue, basically accusing both the EU and China of manipulating their currencies lower to achieve competitive advantage while the U.S. economy attempts to fire on all cylinders amid a rising rate cycle, the trading world has been put on notice that the president can and probably will play that game, too.

Or at least he may jawbone about a lower U.S. dollar (USD) to achieve the same goal without actually forcing the Treasury to intervene in the markets.

It is through this quasi-politically charged prism that we now view the technical set up ahead of the next potentially significant directional move in the USD.

Looking at the big picture chart of the U.S. Dollar Index (DXY), we can make the case from a pattern perspective that the powerful decline from the January 3, 2017 high at 103.82 to the February 16, 2018 low at 88.25 ended the first major down-leg of an incomplete USD bear phase.

This was followed by a February-July counter-trend rally into the 95.50/65 area, which represents a recovery of almost exactly 50% of the prior initial down-leg.

As such, this is a natural resistance zone from where we should be expecting a downside pivot reversal that signals the resumption of the dominant underlying bear trend.

Let’s notice on the attached DXY daily chart that during the past four weeks, DXY has attempted but failed to hurdle the 95.50/65 fifty percent resistance zone. Ironically it, turned down to 94.50 from the 95.50/65 plateau in reaction to President Trump’s comments in his July 19 CNBC interview.

To trigger an initial sell signal, DXY must break and sustain beneath its multi-month up trendline, now in the vicinity of 94.20.

See chart illustrating the technical pattern of the DXY.

Mike Paulenoff is a veteran technical strategist and financial author, and host of MPTrader.com, a live trading room of his market analysis and stock trading alerts.   Sign Up for a Free 15-Day Trial to Mike's Live Trading Room!

EUR/USD: Euro Extends Declines Ahead of Recent US Retail Sales Report
9 hours ago 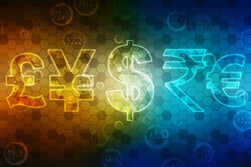 President-elect Biden promised to reveal a new spending proposal worth “trillions” on Th...