How to Look at Fundamentals & Technicals 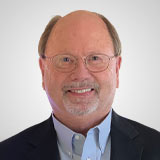 It’s finally arrived.  The SF MoneyShow is this week and I’m looking forward to meeting many of you in person.  For those of you who won’t be able to attend, you can stream my debate with Mark Skousen on Friday morning here and my talk focusing on the Market-Directional charts on Friday afternoon here.

With the S&P 500 so close to hitting new record highs, I want to show you the latest Market-Directional charts.

Here’s the chart for SPY, the ETF that tracks the S&P 500.  SPY bounced twice off the dotted blue trendline (a statistical moving average) and has been climbing higher since the first week of April. 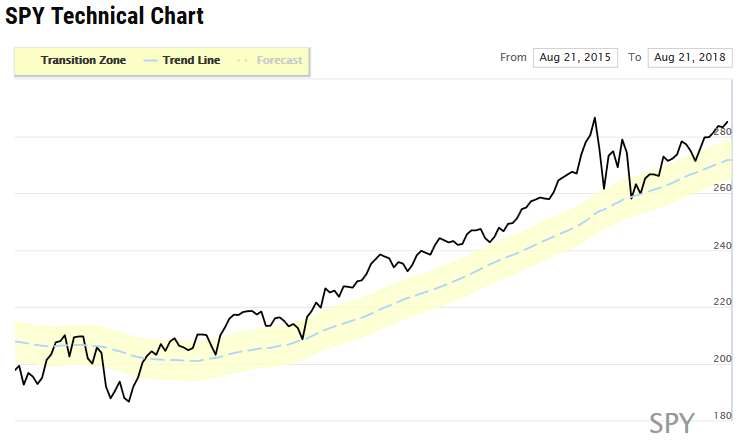 You can see that the chart for QQQ, the ETF for the Nasdaq 100, shows even more momentum than the chart for SPY.  QQQ never touched the trendline and it has made several new highs in the past few months. 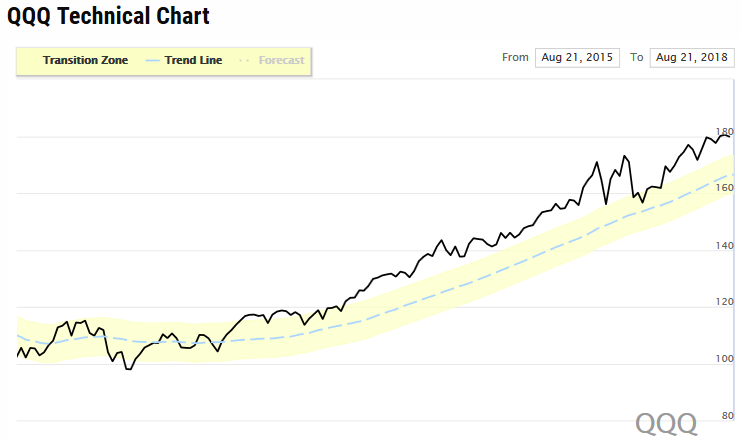 A stock we’ve owned for a few months might surprise you.  It’s Five Below, Inc (FIVE).  FIVE is in the consumer discretionary sector and it’s part of the specialty retail industry.  FIVE has been trading above the trendline since April 2017.  We bought FIVE at just under $75, right before the large spike. 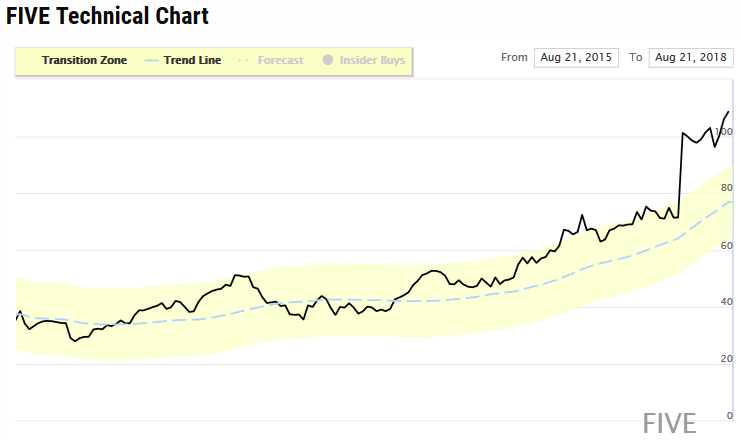 We sold off some of our holding after the large move up, but we’re still sitting on most of the position at an almost 50% gain.  FIVE measures as a volatile stock because of the big move to the upside.  Its current EM is $12.45 and the normal stop is set at $89.33.  Because of the large gain we have in the stock, I have the stop set higher at $98.67 for my managed account clients.

Remember, I don’t guess with any of my trades.  It’s possible that the trades can move against me, but I know exactly what my exit strategy is before I get into a trade.  This is all part of measuring where the market is and not trying to guess where it might or might not be headed.

Again, I hope to see you this week at the San Francisco MoneyShow.  As I told you last week, I’m glad to be getting out of the Central Texas heat for a few days.  I’ll also be presenting at the Dallas MoneyShow just a little more than a month later.  I look forward  to meeting you and talking Market-Directional investment strategies with you.  Here’s more information about these important events.