We note that the (desperate?) appeal by the Department of Justice to overturn the completed AT&T/Time Warner merger has a date. Time Warner is now Time Media. And we think AT&T as an investment will be satisfactory regardless, writes Gene Inger Wednesday.

It is first and foremost a dividend floor play. The initiatives and products it can offer if the merger is left intact are the added value potential for later.

During the deliberations, the DOJ had called on AT&T (T) and Time Warner to sell all or part of Turner Broadcasting Group. That group of cable networks includes CNN. Or to sell-off DirectTV and keep the cable networks as a potential requirement for approving the pending deal.

After AT&T refused, the DOJ sued to block the merger. It was a $85 billion deal to buy Time Warner.

Despite it being a done-deal and quickly combined, while many believed it was indeed a vertical integration with no logic to overturn. DOJ appealed it anyway.

Wednesday they received a court date of December 6, 2018.

Now the FCC is supporting the DOJ appeal (hatred of CNN by Trump?).

The FCC: “While the commission takes no position on the relevance of any document in this case, it’s concerned that two of the rationales supplied by the district court for discounting the probative value of submissions made to the FCC could reflect a misunderstanding of commission procedures.”

Also, the American Cable Association, representing the small and medium-size cable companies, joined the advocacy group Public Knowledge. It was an effort to overturn the earlier court ruling.

For now, we have to wait and see what happens to the appeal. Don’t look for this to be resolved anytime soon. 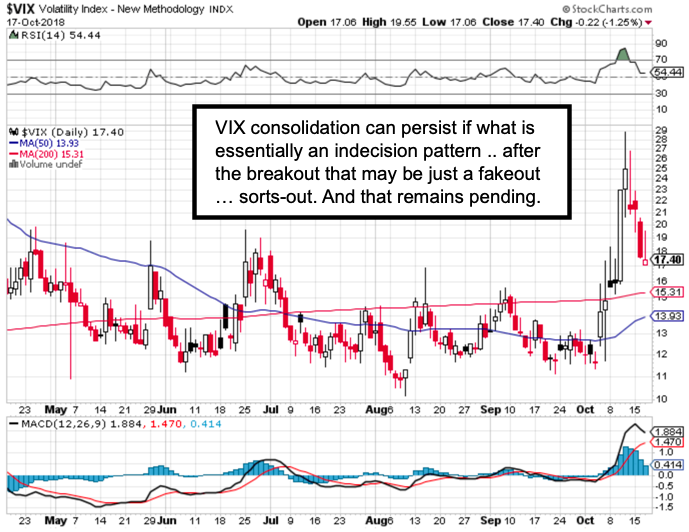 In sum: The market has difficulty extending the move Wednesday and hence besides risk returning. It supports the idea Tuesday was mostly short-covering. Tuesday’s solid advance was merely a huge desperate short-squeeze right off the 200-day moving Average. So, we’d retest Thursday.