The long-term bear channel continues to provide two-way trades for those technicians willing to follow it, reports Al Brooks. 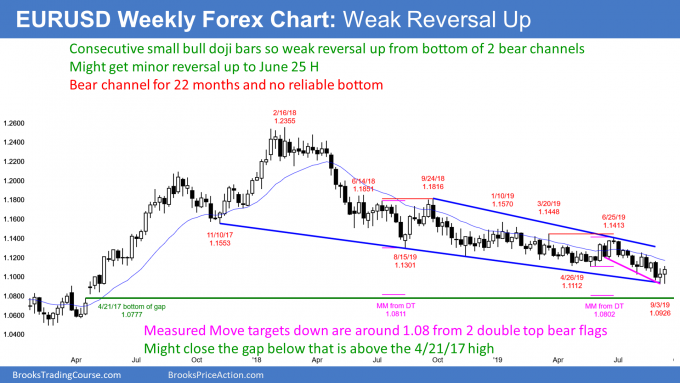 However, the bull bodies for the past two weeks were small. Last week is therefore not an especially strong buy signal bar for this week. The bulls need a strong reversal up over the next couple weeks before traders will conclude that the two-month selloff has ended.

But even if the bulls get their rally, traders know that every reversal up over the past year failed and led to a reversal down after a few weeks. There is no reason to believe that this bottom attempt will be different.

There are measured move targets below. Measured move targets, like all support, are magnets and they draw the market to them. The July/September 2018 double top and the March/June 2019 double top both project down to just above 1.08. Additionally, the gap above the April 21, 2017 high of 1.0777 is also a magnet below.

With three magnets near one another and only about 100 pips below the September low, the bear channel will probably continue down. This is true even if there is a 200- to 300-pip rally up to the Aug. 6 or Aug. 26 lower highs that precedes it.

There is a potential triangulation between the dollar, euro and Japanese yen based on QuantCycle ana...

At some point economic numbers need to match the market enthusiasm, doesn’t it, asks Adam Butt...