Bond futures reversed most of the September pullback and are likely to go at least a little higher, writes Al Brooks.

The 30 year U.S. Treasury bond futures has an inside bar so far in October on the monthly chart (see below). September’s low was above the August low and its high was below the August high. September is therefore also an inside month. 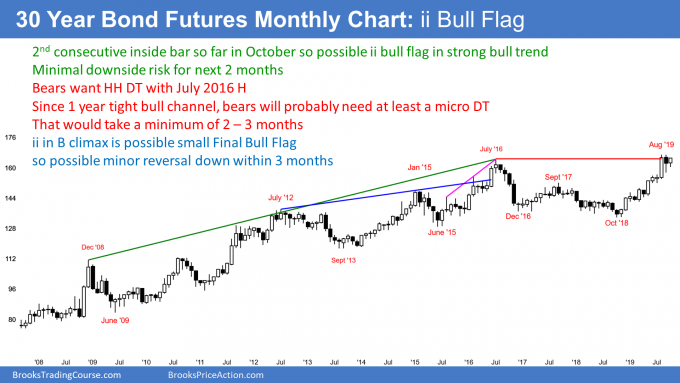 Consecutive inside bars (an “ii” pattern) is a Breakout Mode pattern. When they form in a strong bull trend, there is usually a bull breakout.
However, they represent balance. Consequently, the upside is frequently small. They therefore often form a Final Bull Flag.

That makes sense because the sideways trading indicates that both the bulls and bears believe the price is fair. A breakout above usually gets pulled back into the ii within a couple months.

What happens if October goes above September instead of remaining an inside bar? The same result. September is a bear bar in a buy climax. It is therefore a weak buy signal bar. Traders will expect more sellers than buyers above its high.

Consequently, the upside is probably small over the next couple months. This is true whether October goes above September or if there is an ii bull flag.

Interest rates will not hit zero

Wall St. often likes catchy phrases. Most have a small element of truth. However, most end up as not true. A recent example is, “Gold to infinity and interest rates to zero.”

Interest rates to zero requires bond prices to go to infinity. No one expects that, but some expect gold and bonds to go much higher.

I doubt U.S. interest rates will ever be negative like what is happening in the Eurozone. Americans would not let it happen. We see ourselves as the leader of the economic world and that would represent an unacceptable level of failure and embarrassment. The Fed has many tools to prevent it.

Since Americans will never accept it, it will not happen. Think about it. What would the seniors and AARP do if seniors on fixed incomes had to pay interest to a bank for the right to have a savings account?