The “Powell Pivot” was what Wall Street was really, really hoping for last week, but it was not meant to be, Mike Larson, editor of Safe Money Report.

Instead of signaling satisfaction with progress on the inflation front, Federal Reserve Chairman Jay Powell did the opposite Friday.

Instead of backing off on his interest rate-hiking plans, he promised to “use our tools forcefully” in a speech at the Fed’s annual Jackson Hole, Wyoming retreat.

And instead of celebrating a newly dovish central bank, investors listened to Powell warn about “some pain to households and businesses”...then ran for the hills!

The Dow Industrials (DJI) plunged more than 1,000 points by the end of the day Friday...another 184 on Monday...and still another 308 on Tuesday. Plus, the dollar and the COBE SPX Volatility Index (VIX) volatility gauge both shot higher.

Meanwhile, in the interest rate futures market, speculation about the Fed’s next move ramped up. The CME’s FedWatch tool now shows that bond investors are pricing in about a 70% chance the Fed will hike rates another 75 basis points at its September 21 meeting. 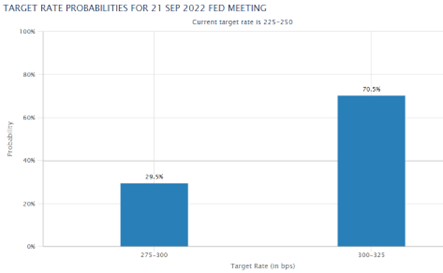 That would be the third straight move of that magnitude, something we haven’t seen in decades. Yet even another aggressive hike would leave the Fed’s benchmark rate far below the nation’s inflation rate.

Is it any surprise then that there isn’t much working well?

Or that even supposedly “safe haven”/”risk off” assets are getting creamed? The iShares 20+ Year Treasury Bond ETF (TLT) has fallen 23% YTD.

Not really. But you can still find opportunities...if you know where to look! Specifically, if you stick to Safe Money stocks and sectors like utilities or consumer staples, you can still profit.

Those kinds of defensive, higher-yielding, higher-rated names are beating the market nicely—and should continue to do so into next year. Make sure that’s where your hard-earned investment dollars are being directed.