Explained: The American Economy Is Now a Super Bubble 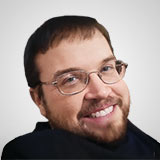 A market bubble is when prices are too high based on historical fundamental valuation metrics at approximately two-sigma from the historical trend, says Steve Burns of New Trader U.

Some examples of previous modern superbubbles in the financial markets are the 1929 stock market crash, the 1970s, and the 2000 dot-com bubble. These events are extreme in historical nature and can see drops in prices of 50% to 90%.

Legendary investor Jeremey Grantham has been publicly saying the US is in a superbubble of stocks, bonds, and real estate for almost a year. He said recently that this bubble has still not really popped. Grantham saw the 1980s Japan stock bubble and the 2008 financial crises coming and warned people of both of them before they occurred so he’s a good source for viewing macroeconomic trends.

“Only a few market events in an investor’s career really matter, and among the most important of all are super bubbles,” Grantham explains. “These superbubbles are events unlike any others: while there are only a few in history for investors to study, they have clear features in common.”

“Prepare for an epic finale—If history repeats, the play will once again be a tragedy. We must hope this time for a minor one.” Grantham said.

“Thus we could say the current event, so far, is looking eerily similar to these other historic super bubbles,” Grantham said.

Grantham’s greatest concern for the stock market is that the price-to-earnings multiples for companies have not compressed even with the growing dire economic outlook for future earnings. He still believes the June lows will be retested and taken out with new lower prices.

The Mother of All Crashes Is Coming

Grantham is not the only one who sees a superbubble in the current markets. Michael Burry of Big Short fame has also been bearish on the markets for over 18 months and has already had many short positions fail like Tesla put options and ARKK put options. He recently even went to almost an all-cash position in his capital under management holding only one prison stock according to his most recent 13f filing.

On June 30, 2022, Michael Burry tweeted that we were only halfway through the recessionary cycle as the stock market had just begun P/E multiple compression and next there would be earnings compression. This could project out to an S&P 500 price of approximately 2800 based on a historically normal P/E ratio of 16 for the stock market. This points to him predicting we could be only halfway through the current bear market. He has recently tweeted that the 20%+ rallies off the June lows back to the 200-day moving average was a bear market rally.

The term printed is not accurate as most US dollars are created digitally by the Federal Reserve to purchase US treasuries and to support other securities that are added to their balance sheet.

US government debt was approximately $27 trillion at the beginning of the pandemic. It’s currently $31 trillion and counting. This was an increase of $4 trillion in US dollars used to purchase national debt so it could be spent on the congressional bills passed in congress over the past two years and nine months. 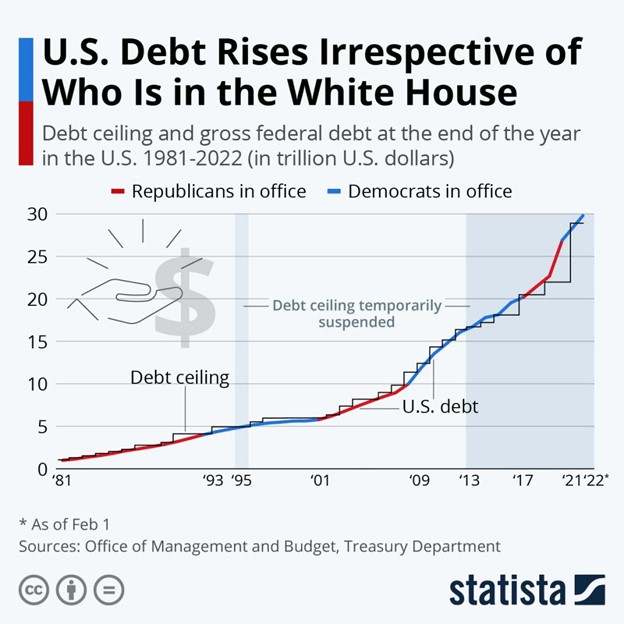 The Federal Reserve also used US dollars to purchase approximately $5 trillion in assets to add to their balance sheet. 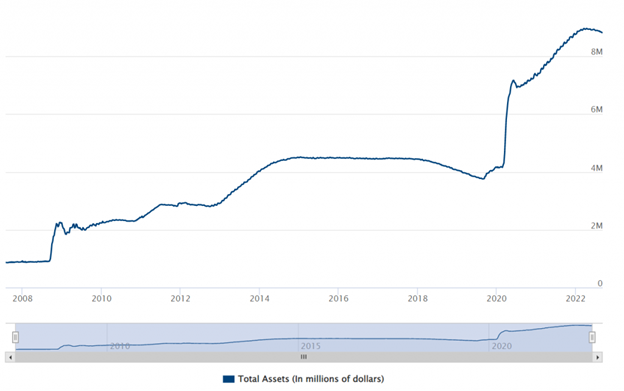 Combined the US government and Federal Reserve added approximately $9 trillion dollars into the financial system from 2020 to 2021 for stimulus checks, paycheck protection loans, increased unemployment benefits, asset purchases, and money sent to states to improve ventilation in public schools and government buildings among other things. This increased money supply multiplied the amount of money available in the markets.

Most of this new money went directly into the financial markets if you look at the charts of stocks, crypto, and real estate and most of it did not circulate. A lot of it was also consumed through purchases going directly to the profits of major corporate earnings. The money in circulation did not rise as much as would have been expected by this surge of supply as it was used quickly and absorbed into the financial markets. 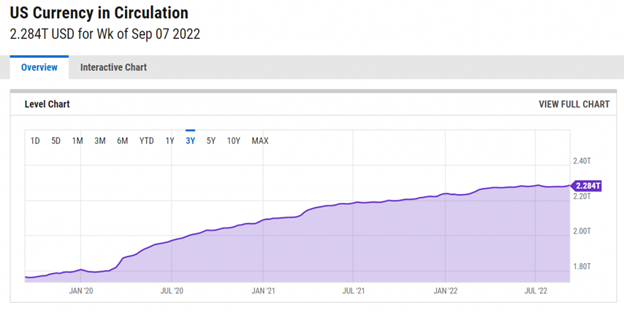 This money is the primary driver of the final stage of the superbubble as it poured into the stock market, speculative meme stocks, cryptocurrencies, NFTs, and real estate to name a few places. The Federal Reserve also loaned money at low-interest rates to corporations and banks that they used to speculate on assets. BlackRock’s purchase of residential real estate is a good example of feeding into what became a super bubble.

The current everything bubble we are seeing is driven by the inflationary pressure of too many dollars chasing too many asset classes, commodities, bonds, along with goods and services. The war in Ukraine also led to energy price pressures in Europe due to sanctions and Russia selling energy to other countries.

The inflationary pressures on food, energy, and real estate have given the Federal Reserve no choice but to raise interest rates to try to cool off the pricing pressure created by easy monetary policy. The Fed also must try to begin distributing its balance sheet to the market to bring down high speculative asset prices through quantitative tightening.

It was the easy access to fiat currency over the past 15 years since the 2008 financial crisis that has led to this current super-bubble. The 2020 financial pandemic response was the finale that sped up entering the end game of modern monetary policy allowing for reckless government spending and central bank printing. Monetary policy must change now to avoid out-of-control hyperinflation, the superbubble must be popped. How the central bankers and politicians manage the timing and magnitude of the popping is the only thing that remains uncertain.