Back in March, I predicted that the total U.S. economic response to the COVID-19 crisis would be at least $10 trillion, recalls Frank Holmes, CEO of US Global Investors and editor of Frank Talk.

Between the relief packages passed by Congress and monetary stimulus enacted by the Federal Reserve, we’ve already reached that enormous sum. And yet it still won’t be enough to prevent further economic erosion, according to some economists.

The Fed now has the ability to buy up to $750 billion worth of corporate credit through its Secondary Market Corporate Credit Facility (SMCCF). Thanks to all this buying, the bank’s balance sheet has skyrocketed past $7 trillion, representing nearly a third of the entire U.S. economy.

That’s up significantly from 6 percent of GDP in 2006, when Alan Greenspan vacated the Fed. Combined with near-zero interest rates, these actions have prompted a tidal wave of corporate borrowing.

There’s no denying that we’re in uncharted financial and economic waters right now. In my eyes, that’s more than enough reason to make sure your portfolio has adequate exposure to gold and gold mining stocks to help hedge against potential inflation, currency devaluation and a collapse in equity prices.

Many investors who believe they have enough exposure to the yellow metal are actually underinvested. Most broad-based commodity indices tracked by mutual funds and ETFs have an underweight in gold producers, especially compared to oil producers.

Our preferred way to get exposure is with gold and precious metal royalty and streaming companies, which have historically had strong availability of capital, substantially higher margins than producers and organic growth opportunities with limited required capital. They’ve also provided investors with a highly diversified set of active mines.

We believe royalty companies, which had an impressive first quarter, feature a superior business model in the metals and mining industry.

Together, these five stocks have increased sixfold since 2007, when Franco began trading publicly. Producers, meanwhile, have remained essentially flat over the same period. 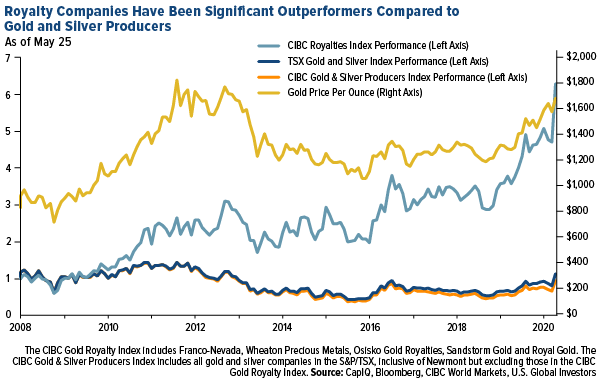 That’s not to say you should avoid producers and explorers. Far from it. But if you’re going to put money in a mutual fund or ETF that invests in gold mining companies, I would make sure that it’s overweight royalty and streaming companies.

Silver Play That Can Earn 8.5% by Year End
8 hours ago

A "Streaming" Fund for Gold Royalties
12 hours ago