Monty Guild on the New "Abnormal"

Really, there is only one long-term question facing investors at this juncture; will the “new normal” that has emerged from the pandemic be enduring? asks Monty Guild, chief investment officer and portfolio manager at Guild Investment Management.

Or will it prove a temporary aberration that, with however much ease or difficulty, passes and yields to the return of something more akin to the “old normal”?

On the answer to that question hangs every long-term investment strategy. That answer will govern where an investor looks for opportunities, and how an investor identifies and evaluates risks.

The “new normal,” we believe, can be analyzed into two major categories: monetary and fiscal, on one hand, and technological, social, and political on the other. These categories are related but independent, and will likely continue to evolve somewhat independently as time goes by.

In both categories, the “new normal” long predates the pandemic, which has served mainly to accelerate (and exaggerate) trends that had already been underway for a long time. In both cases, that may tell us something about the durability of the trends.

The Monetary and Fiscal “New Normal”

The word “unprecedented” has become unusable over the past year and a half; it ran out of steam not long after the Fed’s inauguration of its commercial paper buying facilities last March. Still, we struggle to find another word to express the magnitude of the changes wrought by covid. Some data points for your consideration:

Let us also share with you two other new asset classes. One is cryptocurrencies, which originated a decade ago and have risen in prominence during the pandemic. (We’ve been calling cryptos a new asset class for several years, and have recently been belatedly joined in this assessment by Goldman Sachs analysts.)

Speaking more figuratively, another “new asset class” that has risen in prominence during the pandemic is one that we could simply call speculative crapshoots.

By this we mean any financial asset, particularly an equity security, that trades at a price wholly unmoored from any long-term fundamental valuation measures — perhaps at prices which bear no relation to the value of underlying assets or probable future earnings streams.

Of course crapshoots as an asset class are not new; they appear and disappear episodically (the last apotheosis of crapshoots was in 2000).

This category could also include the new phenomenon — which will ultimately be enabled on a mass scale by the rise of decentralized finance (DeFi) — of partial “ownership” of luxury goods — art, yachts, classic cars, wine, luxury properties, etc. (However, we do not want to denigrate DeFi indiscriminately, since it may ultimately provide potent benefits for investors.)

Some of these crapshoots may have sources of income and revenues that are currently unrecognized by traditional analysts, and thus be legitimate growth stocks. Most, however, are just hype and hopes that have no underlying secret sauce to stimulate sales and earnings.

In essence, negatively yielding bonds, cryptos, and crap shoots all represent the same cry de profundis from investors and speculators — “anything but cash.” (Ray Dalio was widely panned for his comment that "cash is trash" just before the pandemic hit — but let’s just say that the comment has aged well.)

Wealth wants to find a vehicle that will be protected from inflation, because obviously, it believes increasingly that inflation will be the unavoidable — and in fact, intended — end game of all the extraordinary policies enumerated above.

All of this is a consequence of financial repression — the manipulation of interest rates below the levels they would find if market price discovery (especially the most fundamental price, the price of money) were truly free.

In a world where financial repression has begun, markets will simply begin to function differently, as investor psychology changes the weight it ascribes to different factors. The fact that price momentum has become and remained a dominant factor in investing, to the detriment of considerations of value, highlights this shift.

On the Inflation Front

Moving on from the data points mentioned above, there are other data points that suggest that inflation is indeed on the march, as we have been saying for months — and as our in-house real-world inflation gauge, the Guild Basic Needs Index, broke out above multi-year highs early this year. 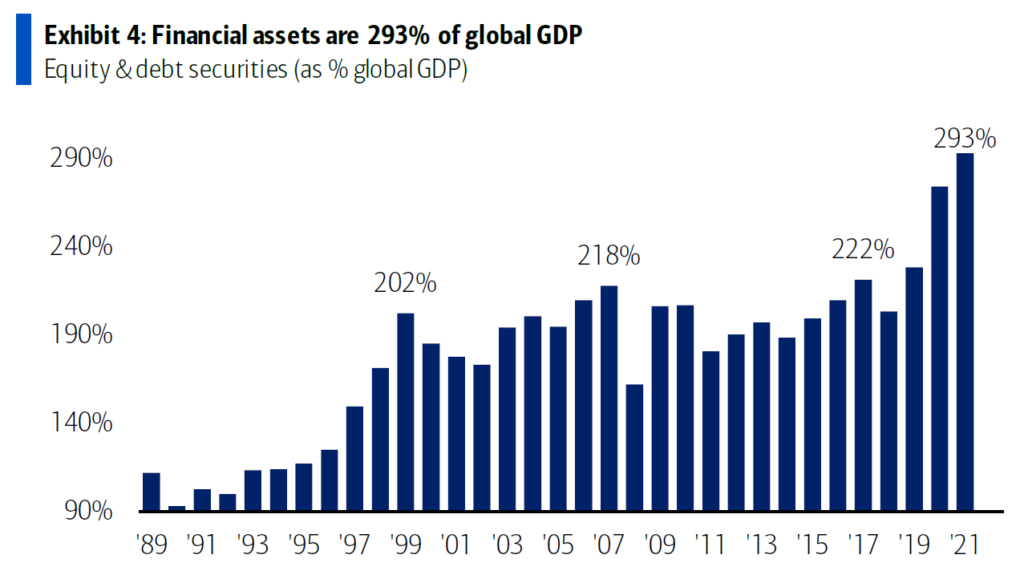 We have explained before why the world’s fiscal and monetary authorities not only do not fear inflation — they want and in fact need inflation in order to deal with the accumulation of debt that has intensified so dramatically during the pandemic. Investors must bear that in mind any time they hear those same authorities talking about “transitory inflation” (though the shelf-life of that term is rapidly approaching its limit).

While central banks may indeed be focused on maintaining economic health — as expressed in their employment mandate — it is hard to avoid the impression that they have added another mandate, which they have occasionally referred to in the past — supporting the price of financial assets, under the rubric of the “wealth effect.”

Treasury Secretary Janet Yellen, then the head of the San Francisco Fed, wrote abut this way back in 2002. The market data cited above suggest that they have been very successful at that unspoken mandate.

Remote work will recede from its pandemic peaks, but will remain permanently elevated. So will e-commerce. If software was going to eat the world, the pandemic might have been its satisfied belch.

Business digitization and its physical and virtual infrastructure has decisively emerged as the preeminent, overarching investment theme of the next several decades: the pandemic moment was the coming-of-age story of the fourth industrial revolution.

That is not to say that other themes will not be relevant and profitable — simply that this theme will be the music with which everything else harmonizes. Even disruptive healthcare and energy will be fundamentally shaped by ubiquitous digitization.

So will the social, technological, and political “new normal” persist? Yes, we believe it will. The pandemic accelerated a trajectory of transformation that will continue. But what about the other “new normal” — financial repression, market distortion, new and bizarre asset classes, central bank binges, unhinged spending, and enduring inflation?

As we have said often, there are two ways out of a situation of extreme indebtedness: default and inflation. Any country that controls its own money supply — which in practical terms means any country with a world reserve currency — will never default on its debt.

So the U.S. and the other major economies of the developed world will never resort to default. They will resort to inflation, as they did in the previous period in which they slowly worked off an elevated debt level: the decades following the Second World War.

Much has changed since that time — not only the tools available to central bankers, but the economic and geopolitical environment in which they are working. Those changes may make it more difficult for them to achieve their goals, but it will not change those goals. Whatever phenomena we are observing as a consequence of their new tools and the new environment are therefore likely to persist.

In our view, that is likely to mean that asset price inflation continues, even in the face of persistent and higher inflation in the real economy and the real experience of consumers, and in spite of the challenges that firms ultimately face from the pressures caused by rising input costs.

Of course, monetary and fiscal authorities may ultimately be forced to resort to more overt forms of financial repression — such as yield curve control — as has been discussed recently by analyst Russell Napier.

Equity markets in the developed world have rapidly recovered from the pandemic crash and have moved to new all-time highs. We believe this is a consequence of a tacit commitment by central banks to support asset prices; market participants’ faith in this commitment can also be seen in the unusual positive correlation of equity and debt securities.

We believe that central banks are constrained to persist in these policies in order to generate the inflation necessary to gradually reduce their governments’ elevated debt levels. Therefore we believe that equity valuations that seem elevated on traditional metrics will likely remain elevated, although of course there will be more or less significant corrections.

We would be buyers of those corrections, and use them as opportunities to buy specifically the beneficiaries of the pandemic-accelerated social and technological changes — predominantly business digitization (both software and hardware) and healthcare, in both cases, with a bias towards disruptive entrants.

Another durable theme accelerated by the pandemic is electrification. Slower-growth bread-and-butter equities may be selected but preferably if they are at least contiguous to these themes. The more extremely valued assets we would recommend only for traders with a nimble mindset.