I have a hot tip for you: Position yourself for the coming surge in cannabis stocks, asserts Sean Brodrick, growth stock expert and editor of Weiss Ratings Daily.

Senate Majority Leader Chuck Schumer recently stated that Democrats and Republicans in the Senate are very close to agreeing on a bill that would allow cannabis companies to access federally insured banks.

Right now, cannabis companies can’t use federally insured banks — or make sales using credit cards — because weed is illegal on the federal level. That would all change with the SAFE Banking Act.

Investors anticipate that it could spark a big rally in pot stocks. Such a bill could be on the President’s desk by the end of the year. Now, to be clear, this won’t legalize marijuana on a federal level (it will still be a Schedule I drug). What it would do is allow companies that operate in states where pot is legal to use the national banking system — and that’s a big plus.

The chart below shows the 2022 and 2023 enterprise value of various industries divided by their earnings before interest, taxes, depreciation and amortization. It’s a common way to value cannabis stocks. 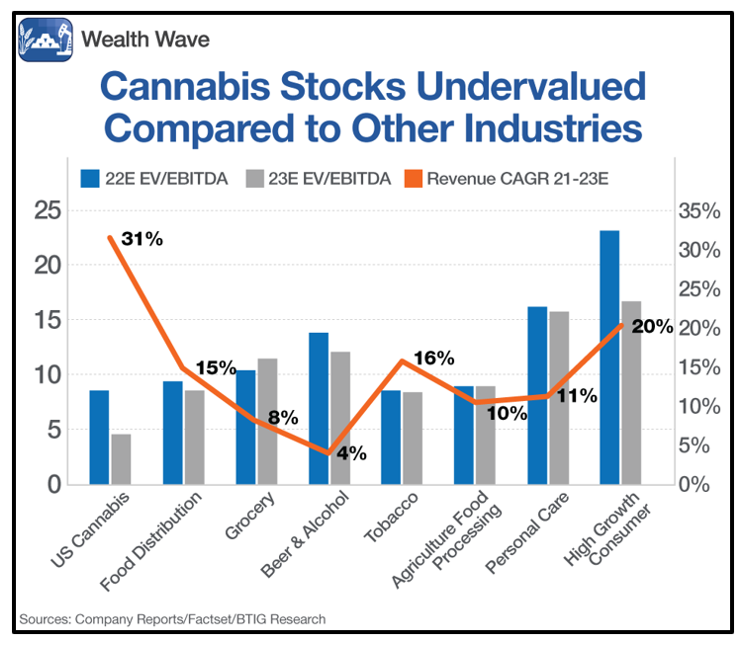 By this comparison, the cannabis industry is cheaper than everything from food distribution to personal care to high-growth consumer stocks.

Pot stocks are even cheaper when you look at next year’s forecast numbers. That’s because of the orange line on that chart, which shows the expected compound annual growth in revenue. For marijuana companies, that’s 31%, which is much higher than other industries.

The next chart shows how flat-footed Wall Street is going to be caught by a rally in cannabis stocks: 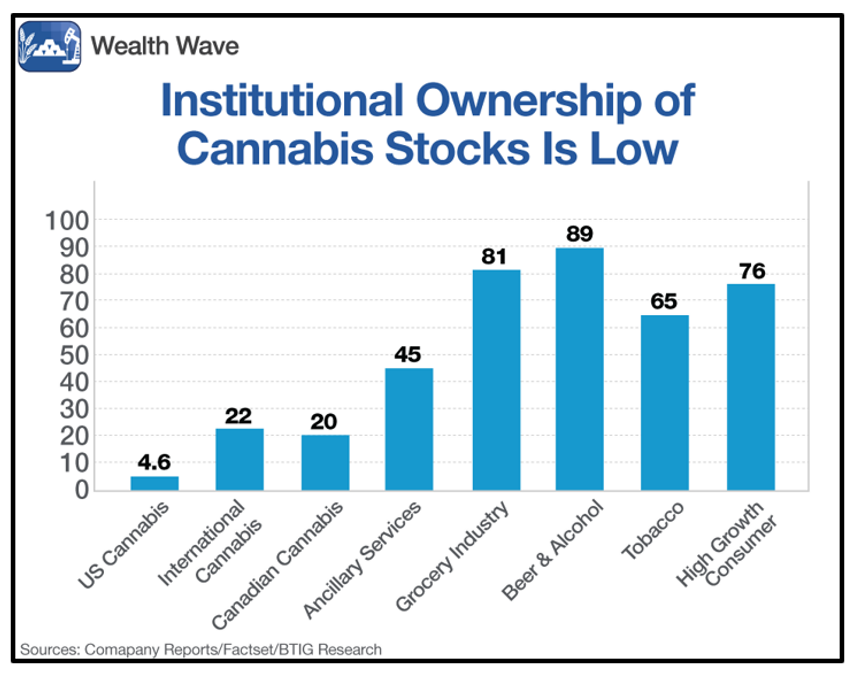 Industry ownership of U.S. cannabis stocks is tiny compared to a whole range of groups, from international cannabis to beer, alcohol and tobacco. There’s a good reason for that: Cannabis is still federally illegal. But in early October, President Biden made it clear he wants marijuana rescheduled.

Federal law currently classifies marijuana in the same grouping as heroin, which is as idiotic as it sounds. But rescheduling takes time. Many observers believe once rescheduling is completed, Biden will push for full federal legalization.

So, it’s still the early days of any cannabis rally. But I have an easy idea for how investors can play this trend. Look into an exchange-traded fund that offers a basket of stocks in the industry. One such ETF is the AdvisorShares Pure US Cannabis ETF (MSOS) is stuffed with leading U.S. stocks leveraged to the cannabis industry. 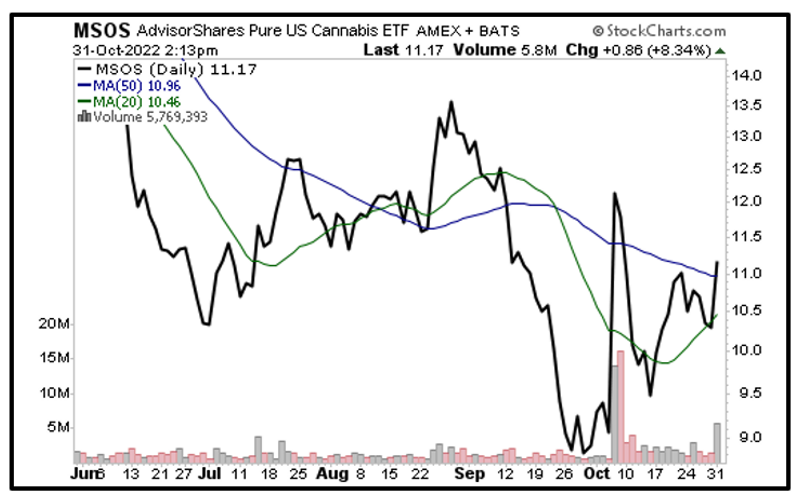 You can see MSOS used its 20-day moving average (the green line) to push up through its 50-day moving average. Bullish volume is strong and improving. This kind of breakout should take it on a trip back to $20 a share — nearly a double.

And it could go a lot higher from there. Why? Because once banking is legal for weed and weed-related companies and once institutions start buying in anticipation of federal legalization, huge weights will be lifted off these stocks.

Bottom line: Weed stocks could race much higher, and you’ll want to saddle up with potential winners like the stocks in MSOS.