A New Road for Fiat Chrysler

Fiat Chrysler Automobiles N.V. (FCAU) is facing a huge challenge to sustain the remarkable resurgence it achieved under the leadership of its visionary former CEO Sergio Marchionne, 66, who died unexpectedly on July 25 after complications from shoulder surgery related to a serious illness, notes Paul Dykewicz, editor of StockInvestor.com.

Automobile industry analysts currently have ratings ranging from buy to sell on Fiat Chrysler’s shares, but its near-term outlook seems stable due to the existence of a 2019-22 strategic plan put in place prior to Marchionne’s health crisis.

In addition, Fiat Chrysler had been planning on a leadership transition to coincide with Marchione’s planned retirement in April 2019 that would have elevated current key executives who now will be taking on increased responsibilities sooner than expected.

Another factor that enhances Fiat Chrysler’s financial future is its decision under Marchionne’s guidance to preserve precious capital by partnering with other companies on electric and self-driving vehicles.

The latter strategy positions Fiat Chrysler as a potential merger candidate with another automobile manufacturer that may want to acquire brands that include Jeep, Ram trucks and Maserati sports cars that gained increased popularity under Marchionne’s tenure.

Mike Manley, who led the company’s profitable Jeep and Ram brands, was named CEO on Saturday, July 21, one day after company officials were told that Marchionne’s condition had deteriorated and that he would not be able to return to work. After the announcement of Manley’s ascension to the top post, Alfredo Altavilla, Fiat Chrysler’s chief operating offer, stepped down.

Marchionne had planned to continue as chairman and chief executive officer of the parent company’s Ferrari S.p.A. business unit until 2021, even after his scheduled retirement as CEO of Fiat Chrysler next April.

Instead, seasoned executive Louis Camilleri became new CEO at Ferrari (RACE) on July 21 to replace Marchionne in that role. Camilleri, who had served as a Ferrari board member, also is the non-executive chairman of the Philip Morris International (PM) board of directors.

Marchionne began as the chief executive officer of Fiat in 2004, turned around the business financially and orchestrated the $4.35 billion acquisition of Chrysler to form Fiat Chrysler in January 2014.

Manley, who has headed the Jeep brand since June 2009 and the Ram brand since October 2016, also has experience in leading sales and product planning, as well as prior executive roles with regions around the world where Chrysler Fiat operates. Now, Manley needs to take the company’s most visible role and show that he can execute an ambitious business plan that he helped Marchionne to develop. 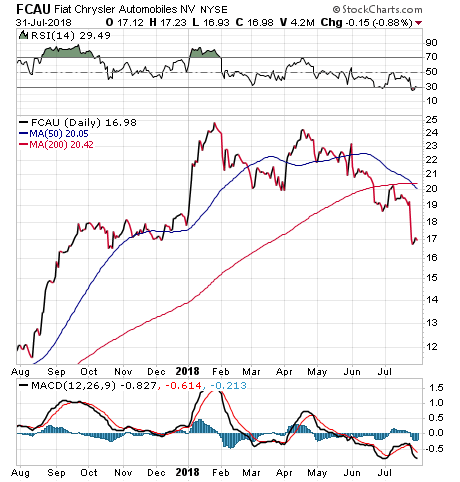 The company’s stock has fallen in recent weeks, but the retreat may offer a buying opportunity to investors who still believe in the value of brands such as Jeep, Ram and Maserati, as well as the five-year strategic plan forged by Marchionne and Manley. Its 12-month stock chart shows the stock is trading well off its 2018 highs.