The iShares MSCI Eurozone ETF (EZU) is an ETF that can give a prospective investor access to large- and mid-cap equities from companies that come from the developed market countries that use the euro as their official currency, notes Jim Woods, editor of The Deep Woods.

At the same time, the fund excludes firms from European countries that do not use the euro, even though these companies account for half of Europe’s market capitalization. This decision has led to two consequences for this ETF. The first is that the portfolio is heavily weighted towards French (35.05%) and German (26.84%) companies.

The second consequence is that the choice to focus on countries that use the euro once made this stock appealing to currency-focused investors at a time when the dollar was weak. Whether it still has this allure in the era of a weakening European economy remains to be seen.

The fund currently has $5.29 billion in assets under management and an average spread of 0.03%. It also has an expense ratio of 0.47%, meaning that it is slightly more expensive to hold than many other ETFs. 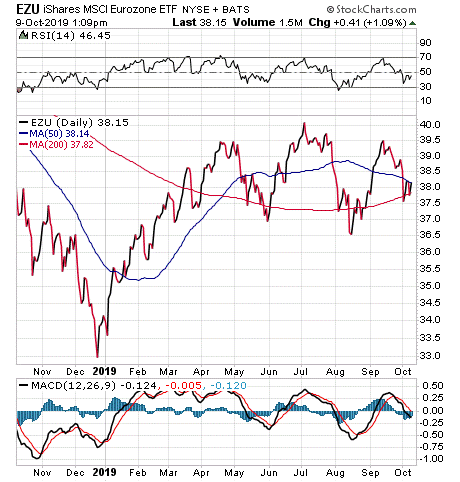 In short, while EZU does provide an investor with a chance to profit from the world of eurozone companies, the sector may not be appropriate for all portfolios. Thus, interested investors always should conduct their due diligence and decide whether the fund is suitable for their investing goals.