Is it Too Late to Buy Palladium? 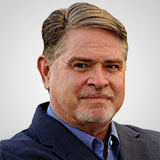 The price of palladium has soaring like a rocket — up 357% from its bottom in 2016. Is it too late to play this lustrous white metal? asks Sean Brodrick, contributing editor of Weiss Ratings Daily Briefing.

I’ve heard rumors about some hedge fund blowing up on a bearish palladium bet. That may yet turn out to be true. Nonetheless, the bottom line is that palladium is seeing a good ol’ fashioned supply/demand squeeze.

Palladium is the best metal to use in catalytic converters for gasoline-powered vehicles. And strong vehicle demand is at the heart of the palladium price rocket. A whopping 85% of palladium demand  comes from the auto industry.

Production is forecast to fall short of demand again in 2020. That would make this the ninth year in a row.

Will the supply/demand squeeze get worse? It certainly could. China, India and Europe are rolling out tighter emissions standards for cars.

That means more appetite for palladium. Meanwhile, above-ground stockpiles of palladium are shrinking. Over the past decade, total stockpiles have been cut in half.

Palladium’s extraordinary rally has the potential to go even higher and test $3,000 an ounce, according to Goldman Sachs. What happens then? Goldman thinks the price will fall. And sure, that could be true. All prices fall eventually. 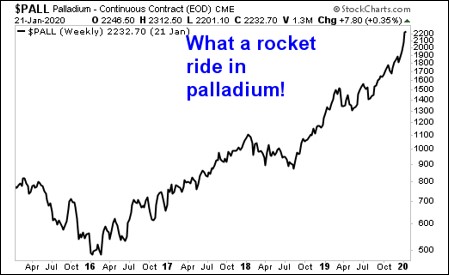 For you as an investor, picking the turning point is be the real trick. Bull markets — and bubbles — can run further and last longer than most people think possible.

So how can you play this? An easy way is the Aberdeen Standard Physical Palladium Shares ETF (PALL). Again, we have a timing problem. Palladium has rallied 95% off its 52-week lows. So, the big question is when should you buy it?

You can see that it is soaring. But PALL — which tracks palladium closely — pulls back pretty regularly. It looks like it’s due for a pullback now.

The interplay between crude oil and the U.S. dollar is key, reports Phil Flynn....