Trading Lesson: Amid Tears & Fears, How to Live to Trade Another Day

As the 1980s duo Tears for Fears from once crooned: “everybody wants to rule the world.” I can’t decide if last week belonged to Roy Orbison – “crying over you” or the Beatles – “while my guitar gently weeps,” writes Dr. Joe Duarte Sunday.

All I know is that those who hadn’t hedged their positions and weren’t prepared for a market downdraft were probably “crying in their pretzels” after Thursday and Friday’s drubbing in the stock and bond markets. Furthermore, the tears and the fears could rise to a crescendo in the coming days as the margin calls begin to pile up if prices don’t reverse.

In what has to be one of those Casablanca “shocking! gambling in this establishment!” moments, you have to wonder if Fed Chairman Jerome Powell ever listened to Alan Greenspan’s “irrational exuberance (I.R.)” speech or studied its results on the markets. For those who don’t remember, the I.R. moment occurred when Greenspan, on December 5, 1996, was addressing a black-tie dinner at the American Enterprise Institute and uttered the phrase, for which he is most remembered.

Needless to say, those two little words, uttered by the guy who at the time held the keys to the world’s biggest money press, led to a short-term but very dramatic market meltdown during the halcyon days of the dot.com bubble. That the stock market rallied another three years after the utterance is a worthy observation and a possible clue as to what lies ahead.

So, flash forward nearly 20 years when Powell acknowledged that the economy may be “too good to be true,” and that interest rates may have to rise “above neutral,” and the market decides to stumble.
Most interesting was that the Fed chief’s comments were delivered contemporaneously of JP Morgan savant Marko Kolanovic’s recent analysis of Powell’s speeches causing market down drafts reliably and that the Fed is at risk of committing a “policy error.”

What we know is that Powell’s words have the potential to cause the market trouble, at least in the short term. So, the real question for investors now is whether his “too good to be true” moment will be similar to Greenspan’s I.R. moment or whether it will be not just another brick in the wall, as I noted last week, but a brick through the market’s window and the proverbial stake to the heart.

Oversold yes – but is it enough?

As I’ve noted in this space over the past two weeks, the New York Stock Exchange Advance-Decline line (NYAD) has been off its game for the last two weeks.

More specifically, NYAD has failed to confirm the last few highs in the Dow Jones Industrials (INDU), S&P 500 (SPX) and the Nasdaq 100 (NDX) indexes. When this happens, it’s known as a technical divergence and it’s important because, even though not all divergences lead to market declines, there have been no market declines of any importance, including bear markets since 1987 without a divergence in NYAD. 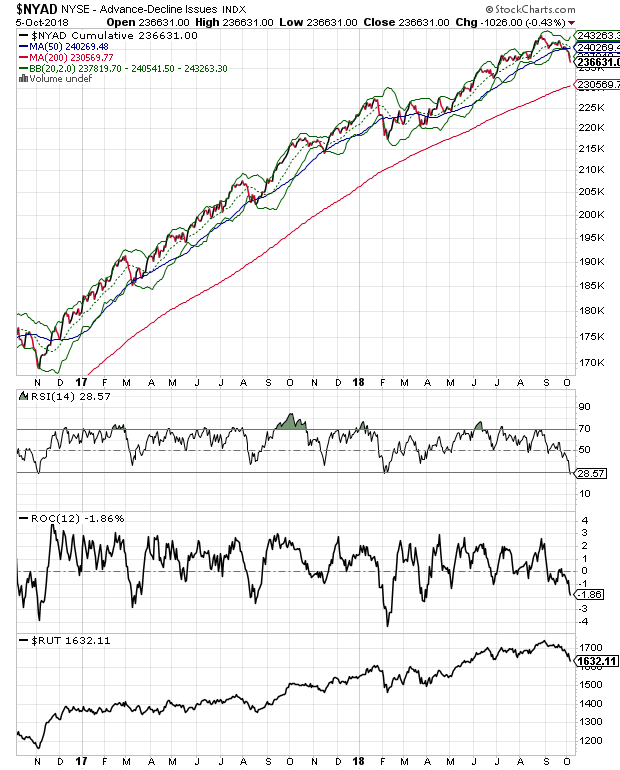 Furthermore, this divergence, if not corrected, could be even more important, especially in retrospect if we are in the early stages of a 10% or bigger decline from the recent highs. Now, given the fact that this is the month of October, a month known for market crashes, and that the politics in Washington and the rest of the world are at a fever pitch, not to mention the bond market’s recent near freefall, you have to give the current situation some serious thought.

Therefore, these are three things of importance to focus on in the NYAD chart:

1) NYAD is well outside its lower Bollinger Bands. Usually, this means that a reversal to the mean – in this case a bounce back toward the 20-day moving average is not just plausible, but likely at some point.

2) The RSI is below 30 on NYAD. Readings just above or just below 30 preceded significant market rallies in November 2016, March, August and November 2017, as well as February 2018.

3) The Russell 2000 index (RUT) of small stocks – lowest panel on the chart – is near the 1600 area which has served as a major pivot point numerous times over the past twelve months.

My second chart this week is of the U.S. Ten Year Note yield (TNX) in a composite view of SPX, NDX, and the FANG Index ETN (FNGU). Note the following:

1) The TNX yield closed above its upper Bollinger Band on 10/5/18. This suggests that in the short term yields should fall some.

2) Note the general inverse correlation of TNX to SPX, NDX, and FNGU.

My point is that this move in both bonds and stocks has come too fast over too short a period of time and that some type of reversal in bond yields and stock prices is what should happen in the short term if the traditional statistical rules for financial markets are still operating normally. More important is not that these events occur, but how they unfold and how long they last. 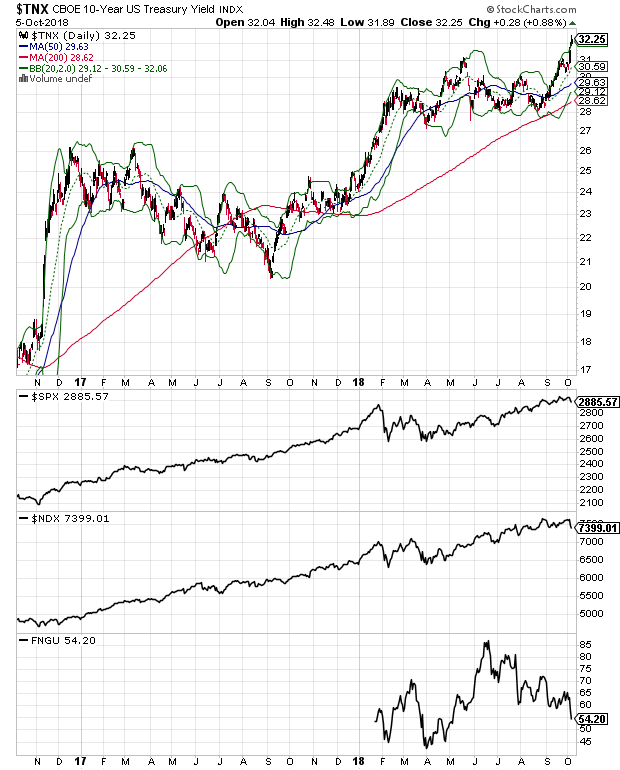 Will this pullback be just another dip to buy? I expect to know more in a few days.

Meanwhile, we are living in the most interesting of times as the entire world is at a decision point inside and outside the markets regarding life, politics, economics and what happens next. Moreover, whatever develops in the next few weeks and what eventually follows in the not too distant future is almost certain have major repercussions over the next few years. This explains the tears and the fears of all parties involved.

As it pertains to the markets, I suggest you remember Duarte’s mantra: trade is small lots, hedge your positions, use options, don’t be afraid of cash and expect the unexpected. As I’ve said before, this time is different.

“Everybody wants to rule the world,” but I just want to live to trade another day.

Joe Duarte has been an active trader and widely recognized stock market analyst since 1987. He is author of Trading Options for Dummies, rated a TOP Options Book for 2018 by Benzinga.com - now in its third edition, The Everything Investing in your 20s and 30s and six other trading books. To receive Joe’s exclusive stock, option, and ETF recommendations, in your mailbox every week visit https://joeduarteinthemoneyoptions.com/secure/order_email.asp.