Equity Markets Can Go Either Way

If there is a positive aspect of robot trading algorithms and their trading strategies it’s that they seem to have short memories, and they move fast. So, as we witnessed in last week’s roller coaster ride in the markets, the difference between a bull market and a potential bear market these days may be measured in a few hours.

Certainly the September employment data was decent enough to rally stocks from a very oversold condition as short covering along with the fact that some are betting on a big push from the Federal Reserve to thrust stocks back into a bullish trend. Indeed, it is plausible that the algorithms may buy into a “life could be worse” scenario and buy stocks at least in the short term, which means that the rest of us will follow.

But the most recent ISM data for both the manufacturing and service sectors suggests the rate of slowing in the U.S. economy is increasing. Thus, the danger for investors is that the bullish case based on the Fed saving the day could quickly fall apart especially if the central bank fails to acknowledge the reality of the moment and act more aggressively. Accordingly, Fed Chairman Powell, in a recent speech, did note that the U.S. economy “faces some risk,” which means that even he is starting to wake up to the perils of inaction.

Don’t get me wrong. I’m rooting for the bulls, in the markets, the economy, and life. But, even if the Fed really wants to prime the pump (more than it already has), its hands are tied because they don’t have a lot of room to lower interest rates, which means that they will likely start QE again, which may or may not work in the long haul. Thus with the business world and the public concerned about politics in Washington and recession risks seemingly on the rise, it’s just as likely that people will keep their money in their wallets for the foreseeable future just in case things get even uglier as the presidential election cycle lurches forward.

That said, since the Markets-Economy-Life (MEL) complex adaptive system meets at the 401-K plan and the home equity line of credit, a return to the bullish trend in the stock market coupled with lower interest rates may have a boosting effect on the economy as the psychology improves with consumers and thus the virtuous cycle could continue to unfold, warts and all. On the other hand, of some concern for MEL is the increasing number of reports of layoffs at diverse firms ranging from Kroger (KR) to unicorn ride service Uber Inc. (UBER), which may or may not be the start of something bigger.

It’s a tough call. But given the impeachment situation, the uncertainty of the U.S-China trade war, the heating up of the Hong Kong protests and now the potential for European sanctions from the U.S. just as Brexit nears another deadline, it’s clearly not a time to take big risks as there are too many things that can go wrong and cascade into a liquidity crisis of galactic magnitude. Thus, as traders we must continue to focus on following the money, what’s working, and on staying alive to trade another day.

The three-day decline and the two-day turnaround in the New York Stock Exchange Advance Decline line (NYAD) was spectacular last week. Luckily for the bulls, the NYAD found support once again at its lower Bollinger Band, near its 50-day moving average after it broke through its 20-day moving average. 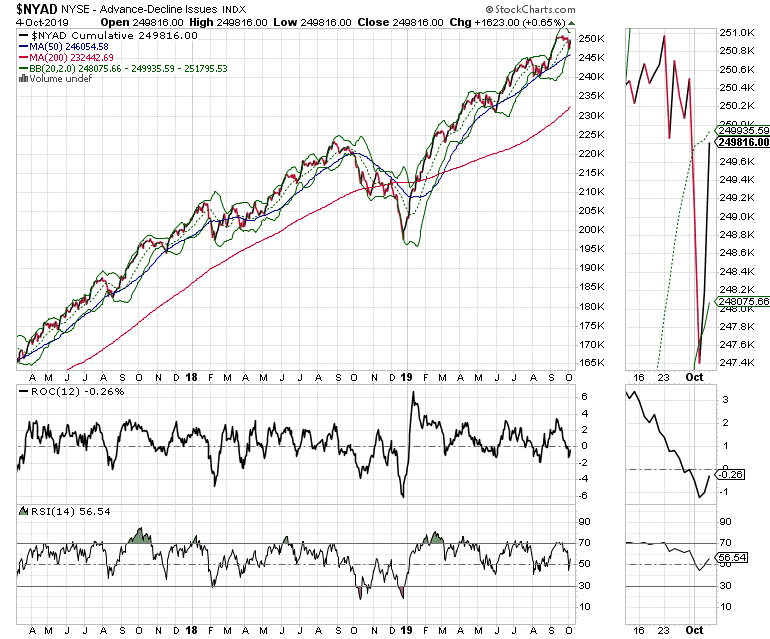 So far, since the election on 2016, the 50-day moving average has kept the bull trend alive six out of the eight times it has been tagged. The only two times when the bears were able to crash through this key line was in February 2018 and October 2019. Of course, the most recent breach led to a mini bear market. Thus, if the 50-day line continues to hold, the odds of a return to a bullish trend will increase given the past performance of this signal.

The S&P 500 (SPX) and the Nasdaq 100 (NDX) indexes fought their way back from brushes with their 200-day moving averages to finish the week above their 50-day, which is a lot better than breaking to new lows (see charts). 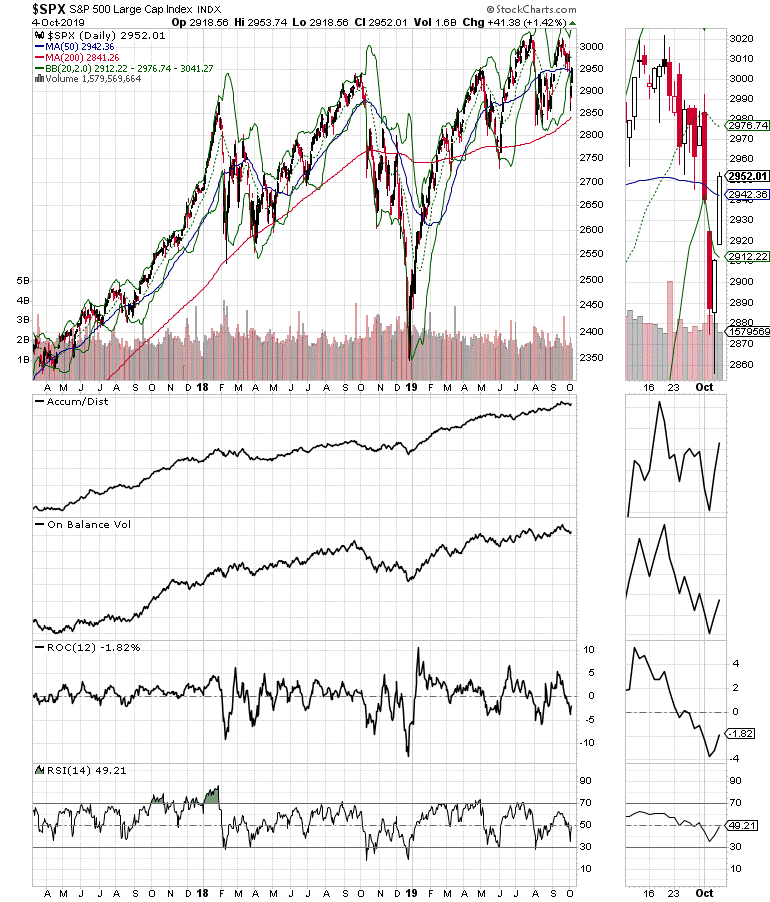 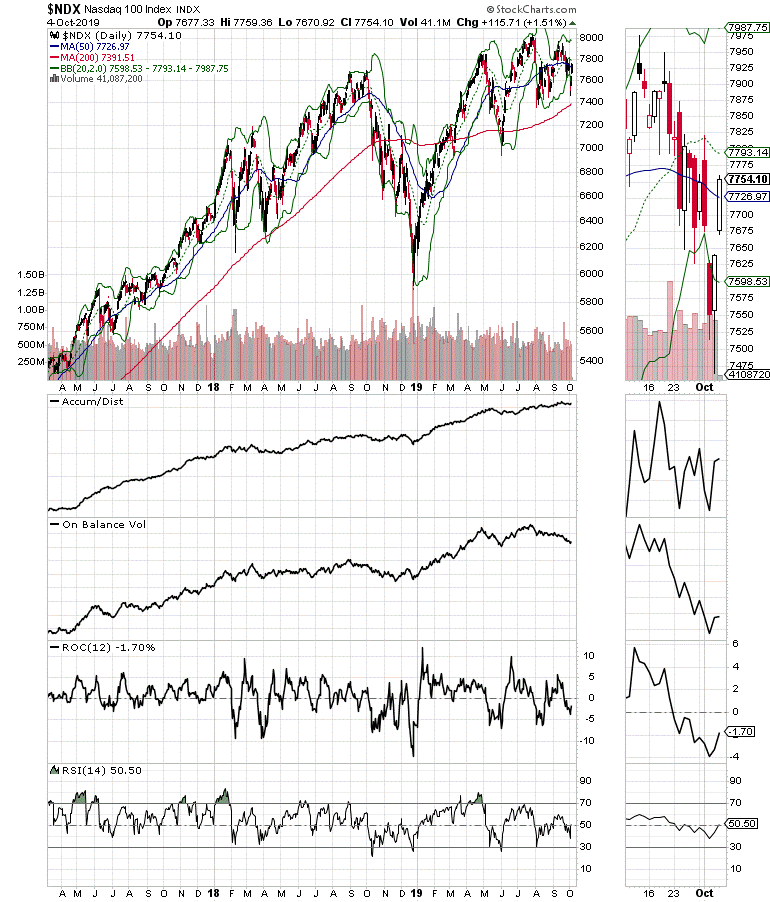 That said there was less volume on the rebound than on the decline. That means that most of what we saw on Thursday and Friday was short covering. So, if this is a new up leg, it will need more volume. Indeed, On Balance Volume (OBV) remains in a short term down trend, so a reversal in this indicator would be very bullish.

The latest Institute of Supply Management (ISM) manufacturing sector data indicated contraction in the U.S. economy. A major component of the country’s manufacturing sector, homebuilders, are reporting robust numbers providing optimism, however, there is a divergence between new homes sales and existing home sales. This one sector, while currently looking positive could easily turn. See tomorrow’s report for a deeper look at housing.

Don’t Bet on the Fed to Bail the Market Out

The financial markets may learn a difficult lesson if the Federal Reserve doesn’t get more aggressive in the face of a slowing U.S. economy amid an increasingly hostile political climate.

There is no sign yet that the market is in the all clear, although the last two trading days last week were encouraging. Moreover, even as savvy traders may be able to squeeze short term gains in the midst of the current volatility, until things in general don’t calm down, there is no point in taking big chances.

At this point it makes sense to hedge as needed, to raise cash as the market stops you out, to continue owning what’s working and to make a shopping list because in a market run by robots, the next bull run may be just around the corner.