The euro has a short-term bullish signal that can be exploited in the midst of its two-year bear channel pattern, writes Al Brooks.

The EURUSD currency pair has been in a bear channel for almost two years on its weekly chart. There have been many reversal attempts, which always happens in trends. As expected, each was minor (see chart).

There is now a nested wedge bottom and a good buy signal bar. This will probably result in at least a few weeks of sideways to up trading. Since the channel down since June is tight, the reversal will probably be minor, like all of the others. 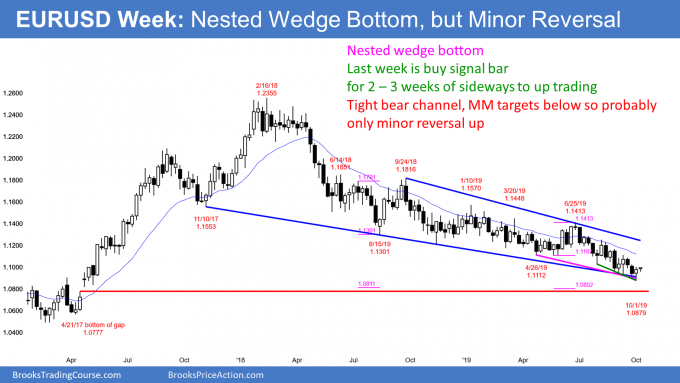 With the good buy signal bar last week, there will probably be enough short covering and bull scalping for a couple legs sideways to up trading. This week will probably go above last week’s high to trigger the buy signal.

Can the weekly chart continue down to the measured move targets and the April 2017 gap without going above last week’s high? Probably not. The bears have not been strong enough to stop minor reversals up. Traders expect at least a two- to three-week bounce here or soon.

There have been four consecutive bull days on the daily chart (not shown). So far, today is the fifth.

On the five-minute chart, there was an early selloff overnight and then a bull trend reversal. But the rally has only been 35 pips. While the bars in the reversal up look good, they are relatively small.

There is enough momentum up for day traders to expect higher prices. At a minimum, they are trying to get above last week’s high of 1.0999. That is only four pips above today’s current high. The bulls will probably trigger the weekly buy signal today or tomorrow.

But will they get a strong surge above last week’s high and then a quick move up to the 1.1250 resistance? Since this reversal will probably be minor, like all of the others over the past two years, the bulls should expect to be disappointed. Many will take quick profits and the bears will scale in as the rally continues. Consequently, any rally over the next few weeks will probably look more like a bull leg in a bear channel than the start of a bull trend on the daily chart.

Since higher prices are likely over the next two to three weeks, bulls will be more willing to buy selloffs. Also, the bear day traders will prefer to sell reversals down and take small profits.

CAD Shrugs off Deficit and Whips USD
2 hours ago