S&P Bulls in Charge, But Corrective Pull Back is Coming

The E-mini S&P 500 is in a strong bull trend. This will probably continue through the end of the year. But the rally has been climactic. That will probably attract profit takers within a couple weeks. If so, traders should expect a 50- to 100-point selloff and then a resumption of the bull trend.

The E-mini S&P 500 futures has a bull bar so far in November. Furthermore, November gapped above the October high (see monthly chart below). 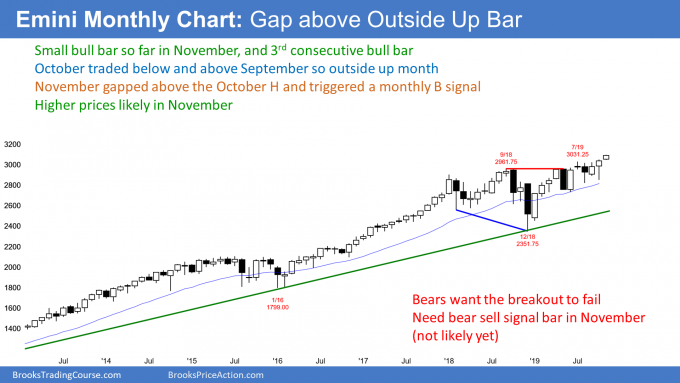 Gaps rarely stay open on the monthly chart. Most close before the end of the month. Consequently, traders should expect a pullback to below the October high before the end of November. But if the bulls can keep the gap open and get the month to close on its high, the rally might continue for five to 10 months before the gap closes.

Can the gap stay open forever? No. The monthly chart is in a buy climax and it is 10 years into a bull trend. Even if it rallies for several years from here, which is unlikely, the odds are high that there would be a pullback that closes the gap. Most likely, it will close in November. If not, then probably in the first half of next year.

The E-mini S&P 500 futures has rallied for five weeks. This is getting extreme. Many bulls will begin to take some profits within a week or two. That profit taking will create a one- to two-week pullback. A pullback means that the low of a bar is below the low of the prior bar on the weekly chart (see below). 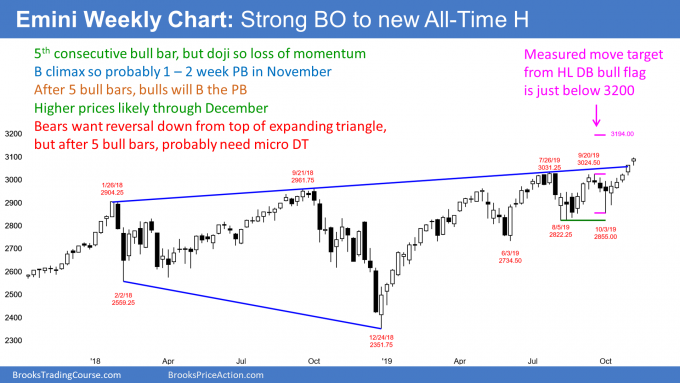 Last week was a doji bar. That is a sign of a loss of momentum and some profit taking. It increases the chance of a pullback beginning this week or the week after.

However, after a six-bar bull micro channel, the bulls will buy that pullback. Traders should expect higher prices through the end of the year.

The E-mini is in a small pullback bull trend on its daily chart (see below). Friday was a one-day pullback and it closed near its high. It is a High 1 bull flag buy signal bar for Monday. 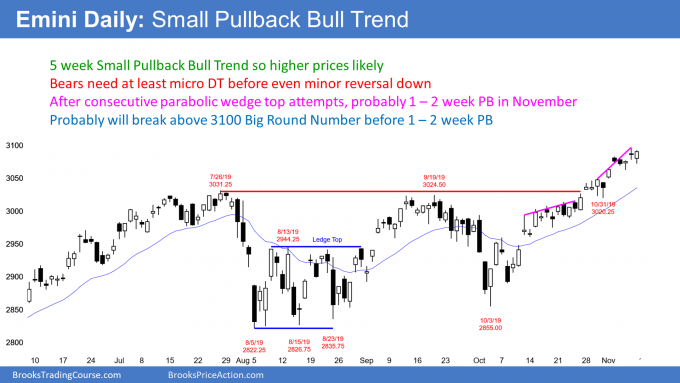 The 3100 Big Round Number is an obvious magnet and the bull trend is strong. Consequently, the E-mini will probably break above 3100 early this week.

It is important to see that there are now consecutive parabolic wedge tops over the past month. These are small and therefore minor buy climaxes, but they typically attract some profit-taking. Consecutive attempts at a top have a higher probability of leading to a pullback.

Also, many bulls are likely looking to take some profits above the resistance of 3100. Moreover, after a five-week rally, there will probably be a weekly pullback either this week or next.

Finally, the rally is similar to the rallies in late February, April, July and September. Each led to sharp selloffs for a couple weeks. Yet, the bulls bought each selloff. Traders should expect something similar soon. However, it probably will be shorter and shallower than the June selloff.

Can the small pullback bull trend continue through the end of the year? Yes, but the consecutive parabolic wedge buy climaxes make a one- to two-week pullback likely first. While the odds favor higher prices, there will probably be a 50- to 100-point pullback at some point in November.

Because the five-week bull channel is tight, a reversal down should be minor. But a climax usually has at least a couple small legs down. That will require a week or two.

The selloff might retrace half of the October rally and close the gap above the October high. Another target is the Oct. 31 low. That is the first pullback in the second wedge rally. The start of a wedge is always a magnet in a reversal.

As I said, traders should expect the selloff to be minor. That means a bull flag and not a bear trend. They should look to buy a reversal after a week or two and expect a new all-time high. The resumption of the bull trend could last through the end of the year.
What about those Bear Surprise Bars?

Whenever a low probability event happens, it is a surprise. An unusually big bear or bull bar or series of bars is a surprise bar or breakout. It traps traders into bad positions and out of good ones. That results in traders un-trapping themselves on first pullback. That typically leads to at least a usually at least a small second leg sideways to down.

None of the bear surprises had significant follow-through. This is because the bull trend is so strong on the daily and weekly charts. Traders see each sharp selloff as a brief discount and they eagerly buy.

You may have noticed that over the past month there have also been many bear surprise bars on the 60-minute chart. None had follow-through selling because the bulls were eager to buy the brief sale.

What might happen in the next two weeks is that this pattern could appear on the daily chart. There were several examples of big bear bars in late September.

A bear surprise bar on the daily chart could create a 30- to 50-point selloff in a single day. After a bounce, there would likely be at least a small second leg down. But like on the 5- and 60-minute charts, traders will see it as a brief sale and the bulls will buy it. Traders should expect a resumption of the bull trend after a week or two of selling. This is true even if the selling is surprisingly strong.

eBay: "Still Relevant" in the Digital Marketplace
5 hours ago

Remember back when eBay (EBAY) was the cool, creative auction site that introduced the first interne...

While investors have many reasons to love utilities, they often don't like betting on single names. ...

Zoetis: Healthcare for Pets
5 hours ago

The most alluring quality of the pet industry for investors is consistency. Americans are expected t...

Market internals for the indices are strong into early next week, explains Trevor Smith....