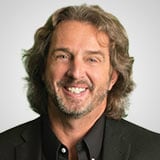 In this article I want to show you exactly how I am planning to achieve more in 12 weeks than others achieve in 12 months, explains Markus Heitkoetter of Rockwell Trading.

First of all, I’m not saying that I’m an expert on goal setting, because I’m not. I’m just sharing the planning process that works for me, it might be completely different for you.

The Most Important Thing For Me In My Planning Process

One of the things that I have learned over the years that works best for me is, I don’t create a plan for everything. Let me explain what I mean by this.

Many, years ago, I heard about a concept that they use in the military, which is called Backwards Planning. And you might have heard about this.

The idea here is that you start with the exact goal in mind and then plan backwards.

I have heard this example many years ago where it was used in the military where they say, for example, let’s say you want to invade a camp on the enemy’s territory.

So the idea here now, is to go backward and say, “OK, what exactly has to happen right before you invade the camp?” Well, this is where obviously you need to have your troops surrounding the camp.

Then you go one step backward. What needs to happen before you have your troops surrounding the camp? And I’m making this up here as we go. I don’t recall this example exactly.

I was not in the military, this is just an example that I’ve heard. So in order to surround this camp with your troops, what do you need to do? You need to get your troops to that camp that you want to invade.

In order to do this, first of all, let’s assume that this is on foreign soil, so you need to get your troops to foreign soil. So this is what the military often uses, so I was told, which is backward planning.

The idea here with backwards planning is that you create a detailed step by step plan of what to do.

Here’s one of the challenges. I don’t do this, because based on my experience, the problem with this is what do you do if something goes wrong?

So let’s say that one of the first steps is that you are getting your troops on foreign soil, well what happens if somehow you can’t because there’s bad weather or you’re getting attacked?

This is where I found that often when you do this, the whole plan becomes kind of useless. This is where for me, I figured out that planning can be overwhelming. It can make the process daunting and can make me feel paralyzed.

I don’t know about you, but what happened in the past before I did what I’m about to show you here is, I got paralyzed. I never achieved my goals because I couldn’t get over the first hurdle of planning.

I want to show you exactly what I do these days to avoid this.

4 Steps to My Planning Process

Step One: I write down my goal.

Step Two: I plan the next two to three steps, and here’s why.

My idea is, and this is what I found to be true, when I walk the first steps the path will reveal itself.

Imagine walking down a foggy path. You don’t actually see the end of the path where it is leading.

When I have a goal, I realized that when I plan out the first few steps and start walking, as soon as I get towards the end where I can see, the path will again reveal itself.

So this is where, going back to my planning process, it works really for me to plan the next two to three steps.

Step Three: I take action and complete these steps.

Step Four: When the fog starts clearing and I see the next step, then I add more steps or to dos to it.

This article is all about my planning process and how to achieve more in 12 weeks than most people achieve in 12 months. So let me give you a very specific example of how I’m doing this.

One of my goals is to buy a resort in Mexico.

Usually I write myself a quick overview of what is it that I want to achieve. I’m meeting with my private Mastermind members usually three times per year in exotic locations to trade, relax, and make money together.

In the past, we have done it in the Cayman Islands, Bahamas, Puerto Rico, and Mexico and other locations, but finding a hotel with reliable Wi-Fi, as well as getting all of our equipment there has been really challenging.

Right now I think that there’s a tremendous opportunity because I know for a fact that the travel and hospitality industry is hurt because of Covid-19.

This is where it goes back to my planning process. So I write down my goal and an overview of what I want to accomplish.

So now you know why I’m doing this, what I want to accomplish here, and now I plan the next two to three steps.

I mean, just having a hotel to have a hotel does not make sense. So what’s the best location? The location should be up to 1,000 miles away from Austin and here’s why.

I’m planning to buy a plane, and this plane that I have in mind right now has a reach of 1,000 miles.

So I’m looking at possibly Mexico, Puerto Rico, Belize, Dominican Republic, Honduras, who knows. This is where I first wanted to find out what a possible price point is?

Last weekend I was in Sacramento meeting with my head coach Mark, my CEO Debbie, and marketing director Jared. I shared this crazy idea with them and we had some fun looking for hotels online.

Here are a few that we found. 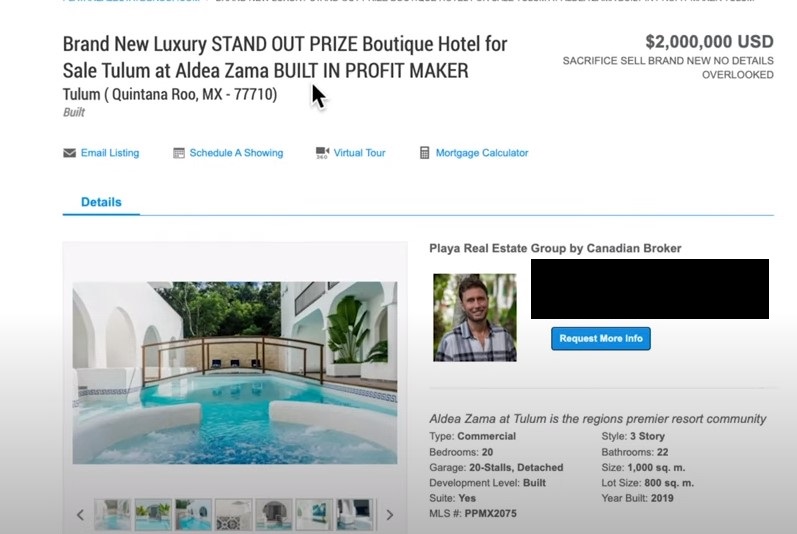 This is the first one. It has, for example, 20 rooms and costs around two million dollars.

This one has 92 rooms, that might be a little bit too big, right? And they also didn’t disclose the price. 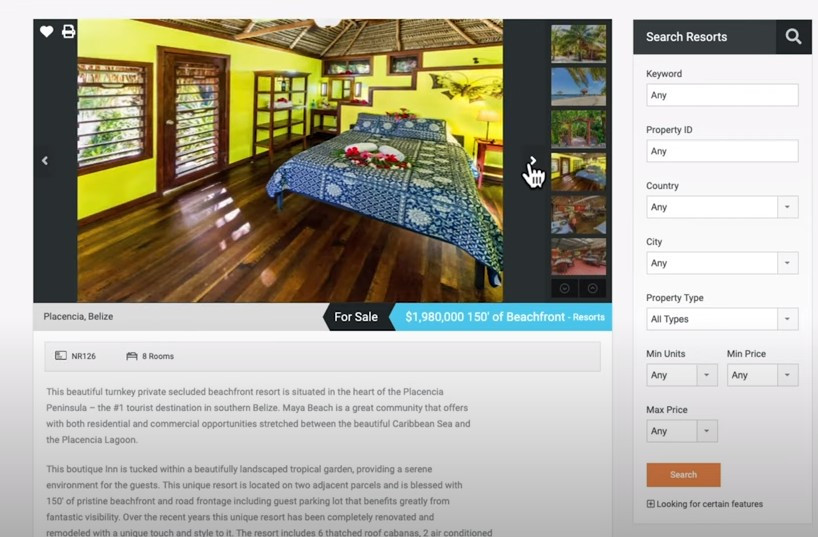 Then we found another one in Belize. This one has 6 cabanas, which might not be big enough for what I have in mind, and it costs 1.9 million dollars.

Pretty cool, right? It’s on the beach, I like this idea.

I found other hotels in Belize, the Dominican Republic, and Honduras as well

You get the idea, but based on my research, I’ve found it’s probably between 1 to 2 million dollars that I would have to invest for anywhere between 20 and 30 rooms.

That was fairly easy and only took me a few hours. I can now move on to the next step in the planning process.

Now the question is, is it possible at all to make money with this? Because if not, then I can stop right here.

Does It Make Sense?

$30,000 in rent per month is covering my financing, which is a mortgage, also insurance. This is also taking care of the property management, utilities, maintenance, renovations as well as capital improvements.

Now I know, having an apartment complex is not the same as running a hotel or resort, but I just wanted to see if this is feasible, and in a moment, I’ll show you why this is making sense.

The resorts that I started to look into were around 26 rooms, 17 rooms, 22 rooms, so let’s just say that I will find something around the 2 million dollar mark that has maybe 25 rooms.

This is what I’m looking for. So the key question is, can I make $1,000 per day in revenue, not in profits, with 25 rooms? It sounds like it’s possible, right?

I know that there’s housekeeping, so there’s probably more than property management and maintenance, right?

But I believe that these are quite realistic assumptions.

Here’s the important thing. Let’s tie this back to what today’s show is all about, right? How I get more done in 12 weeks than most people get in 12 months.

Now, here’s the deal. How long did it take me to do the first two things thus far? Well, I can tell you four to five hours. And now I know whether it makes sense to pursue it before I go down a rabbit hole.

What is my point with all of this? My point is to stick to something really, really simple when going through the planning process.

Keep it easy where you set a goal, then plan the next two to three steps.

Or if you want to go crazy, as I did here, we could do three to five steps.

Then the most important thing is to take action and complete these first steps. Once you do this, you’ll see whether it makes sense and you can plan the next three to five steps and complete this process.