Is the Bull Market in Bonds at an End?

Interest rates have been the powerhouse this past month; they’re flexing their muscles, which is affecting nearly all of the markets, asserts Mary Anne and Pamela Aden, editors of The Aden Forecast.

In fact, there’s much more going on here than meets the eye. As you know, we’ve often talked about how important interest rates are... contrary to what many believe, they are the dominant factor.

The bottom line is, what happens in the interest rate world is going to directly affect you, in one way or another. So it’s very important to keep tabs on interest rates and what they’re doing.

What are interest rates currently telling us? First and most important, a mega interest rate trend reversal is now most likely taking place and if so, this is a huge deal.

It means the downtrend in the 30 year yield (which is an example of all interest rates because they generally move together) is turning up. This is something that hasn’t happened since 1981 when the 30 year yield peaked near 15% (see Chart 11).

As you can see, however, there have been a few fake outs (see asterisks on the chart above). These happened when the yield peeked above the moving average, but then resumed its decline.

And interestingly, these corresponded with major events, like the dot-com stock market peak, the sub-prime stock peak and the peak in the gold price. Could this be another fake out? We don’t think so, and here’s why...

The yield is now breaking above its 80-month moving average, which identifies the mega trend (see the close up on Chart 12). And if it stays above 3.04%, then the mega trend will remain up, signaling interest rates are going to continue moving higher in the years ahead. 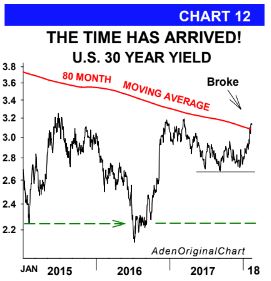 This in turn would mean the bull market in bonds is definitely over and a big bear market decline is just getting underway. This view is also being reinforced by the great bond gurus, like Bill Gross, Jeff Gundlach and Ray Dalio. Even former Fed head Alan Greenspan joined the party saying bonds are in a bubble and it’ll be a critical one.

And as you can see on Chart 13, the bond price index has actually been bearish for nearly two years by generally staying below its moving average. And this will be reconfirmed if the bond index declines and stays below its 2017 lows. That’s why we’ve been advising to avoid bonds and stay on the sidelines.

The 30 year yield is telling us this mega trend reversal is in process, and so is the bond’s leading indicator, which also remains bearish. So if you’re still holding bonds, you may want to head for the exits before this downmove in bonds picks up more momentum.

There are a couple of important reasons why bonds are likely headed lower, and interest rates higher. The economy is holding firm and the employment picture keeps improving.

Unemployment is at a 17 year low but more important, wages recently increased the most in eight years. This is adding to inflation concerns, especially coming on the heels of rising commodity prices and the biggest consumer price upmoves in months.

As you may remember, bonds can’t stand inflation. It’s the bond market’s worst enemy. So any sign inflation is perking up is very negative for bonds. This hasn’t happened for a long time. Inflation hasn’t been a problem since the early 1980s. And over the past 10 years, it’s really been on the back burner.

On the contrary, deflation was the big concern. But those days are over and now inflation is starting to rear its head again. Will it keep going and pick up steam? That’s the big question and we’ll be watching out for this. If so, it’ll result in the Fed boosting interesting rates to stem the inflation pressures and this is also weighing on the bond market.

Rising interest rates alone, however, wouldn’t necessarily hurt the stock market because it would reinforce the economy is strong enough to handle higher interest rates. Also, don’t forget that, even though interest rates are rising, they’re still at low levels, pretty much across the board (see Chart 14). 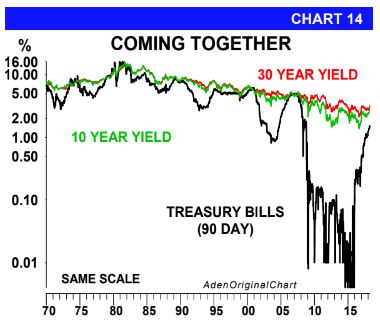 But perception is something else. If investors perceive that interest rates are going to keep going higher, then yes, it could make investors nervous, which is what we’ve been seeing. And that’s certainly true of bond investors.

Most important, foreign bond buyers have been lightening up on their U.S. Treasury bond purchases. That’s already been the case with China, Russia, Saudi Arabia, and others. In China’s case, it’s problematic because China is the U.S.’s biggest lender, holding nearly $2 trillion in U.S. government bonds.

But now with trade tensions brewing, Chinese officials have recommended that they slow their purchases of U.S. bonds even further, or stop them. Meanwhile, the Fed stopped buying U.S. bonds too. So who’s going to buy?

As you know, the Fed had been buying huge amounts of bonds to help boost the economy during the past few years. But with all this buying drying up, there is less demand and the 10 year yield has risen from about 2.05% to 2.90% in recent months, reaching a four year high and technically breaking out on the upside.

Plus, the leading indicator shows it has room to rise further before it’s too high. In other words, interest rates are poised to rise further. This has driven mortgage interest rates way up too. So again, stay on the sidelines and keep a minimum in bonds at this time — or better yet, avoid them.