Inflation has been perking up, not only in the U.S., but in the other major countries as well. So despite sluggish economic growth, inflation expectations are moving to center stage, explains Mary Anne and Pamela Aden, editors of The Aden Forecast.

This will likely be temporary because eventually all interest rates tend to move together, especially as far as the major trends are concerned. 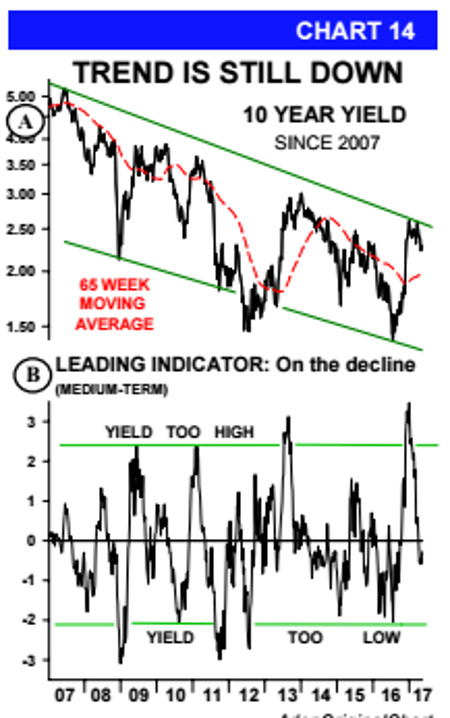 For now though, the 10 year yield’s leading indicator is on the decline and it hasn’t reached the “too low” area. This tells us the yield is poised to decline in the period ahead.

And since bond prices move opposite to long-term interest rates, bond prices will rise in what will likely be a last hurrah. This will provide a good opportunity to sell bonds if you’re still holding some.

As you can see on Chart 15, the red line shows the yield since 2014, and the movements are essentially a repeat performance. We call this The Wave and if it continues, long-term rates will indeed go lower before they again move up. 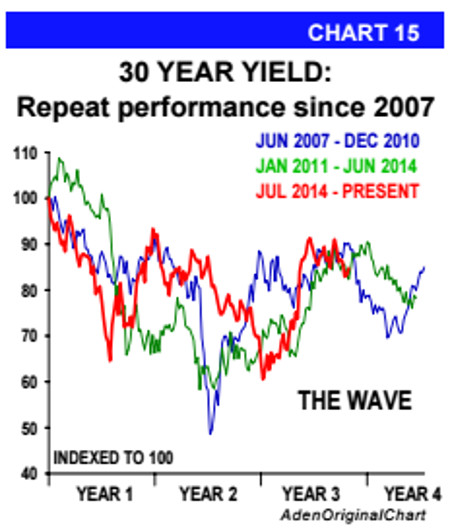 At that point, we believe the bond bubble that’s been in force for decades will burst. And when it does, bond prices will fall sharply. This would be confirmed if the 30 year yield rises and stays above 3.20%.

Many bond gurus tend to agree. They believe bonds are on limited time. At the least, they’re risky, which is why we continue to recommend staying on the sidelines and out of bonds.

Should this outlook change, say due to a recession then we’ll change too. But for now, the red lights are still flashing and it’s best to stay cautious.