Today’s trade idea from Landon Whaley: For those interested in capitalizing on a South African equity opportunity, you could consider using the iShares MSCI South Africa Index ETF (EZA). He is Founder and CEO of Whaley Capital Group.

The phrase “fake news” is all the hype since the Trump election, but the truth is that fake news has been the status quo in financial markets since the horse and buggy were the latest hybrid. I read headlines and articles every week that are either flat out wrong or are focused on the least important part of economic data.

I’m not talking about articles written by 45-year-old baristas living in their parents’ basements; I’m talking about reputable news sources. But the beauty of this preponderance of fake news is that once you recognize it, you can use it to your advantage.

Wednesday (June 7), some fake news hit the airwaves that provides us with a bullish trading opportunity for South African equities.

South African GDP says what?
The morning headlines were riddled with concern about the South African economy:

The problem is that these media sources focused on the least important, and most noisy, part of South Africa’s Q1 2017 GDP report. Yes, the quarter-over-quarter data show the second consecutive quarterly contraction in GDP. And yes, this is the very definition of a recession. However, if we evaluate the most critical aspect of the GDP report, which is the slope, or trend, of the annual growth rate, we find something very different from what the headlines are telling us. 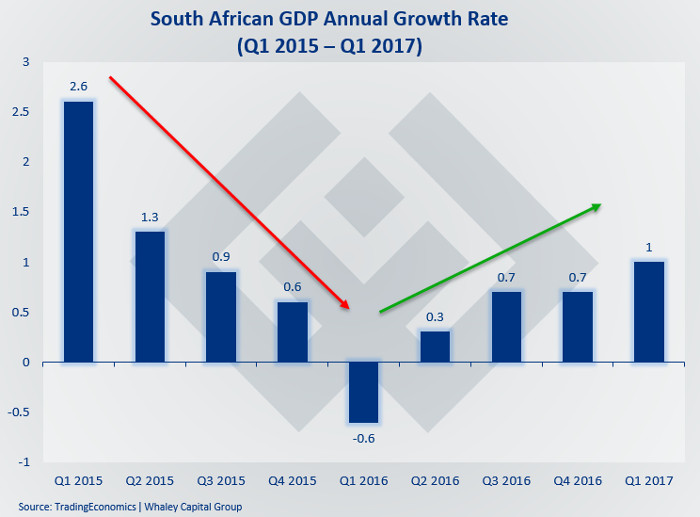 In contrast, most investors and media types focus on the noise. In the case of GDP reports, the noise is the quarter-over-quarter growth rate.

On the flipside, since GDP growth bottomed early last year and has been accelerating higher, SA equities have gained 8.7% through the end of Q1 and an additional 8.3% here in Q2, making a cumulative gain of over 16%.

I’ve been professionally managing money for almost two decades, and I can confidently say that equity markets don’t post double digit returns when economies are in a recession, or even when they are in a period of simply slowing from higher growth rates.

Those of us who can filter the noise and see the signal can use the 4% sell-off in South African equities in the last three trading days as an opportunity to position ourselves for potential profit that other investors have completely missed.

Today’s trade idea
For those of you interested in capitalizing on this South African equity opportunity, you could consider using the iShares MSCI South Africa Index ETF (EZA).

You could initiate new long positions on a pullback to the $57.94 area, or lower. Depending on how much room to move you want to give this trade, you can use a risk price between $56.90 and $54.70. On the upside, I would book profits on some or all of the position on any rally above the $63.38 area.

The Bottom Line
The lesson today, boys and girls, is two-fold. First, never make investment decisions based on headlines, no matter how reputable the news source. Second, the most important aspect of any economic data series is the slope, or trend, of its annual growth rate.

Focusing on the most important aspect of economic data will give you a unique perspective shared by very few. This perspective enables you to see opportunities and, more importantly, risks that other investors miss.

Biotech Repligen Breaks Out
12 hours ago

Charging Ahead: The Future of Digital Credit
13 hours ago