In early March, the 10-year yield was circling 2.87%. Now it is circling 3.00% for the first time in four years. The increase is probably shocking to many analysts and investors, writes Mike Paulenoff, MPTrader.com.

Neither economic nor inflation data provide adequate justification for yield to be higher than it was two months ago. But there are times when the contradicting longer-term technical set-up should be heeded, even when the trend lacks strong support from lagging tabular data. 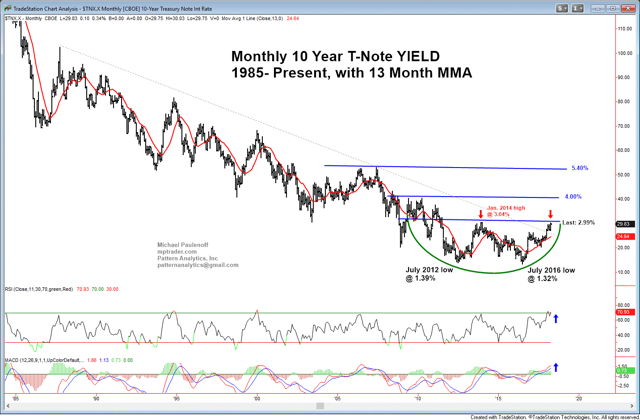 In scanning the past few months of U.S. economic data – such as Retail Sales, New Home Sales, Personal Spending, Consumer Prices, Non-Farm Payrolls – what jumps out is the variability of the data. Most of these data series reflect a zig-zag pattern that belies a consistently strong directional economic impulse.

On April 27, investors received their first look at the advance estimate of Q1, 2018 GDP, which came in at 2.3% compared with consensus estimates of 1.8% to 2.0%. More surprising, perhaps, was the subdued Q1 Price Index at 2.0% versus estimates of 2.4%, although the inflation gauge did remain at the Fed’s 2% target.

The influences above may underlie the emergence of a very powerful technical set-up for a generational bull market in 10-year yield. These negative factors have occurred despite uneven economic growth and an inflation rate that remains subdued beneath the Fed’s target of 2% by most measures (notwithstanding the GDP Price Deflator).

The persistence of the dominant uptrend carved out by 10-year yield since July 2016 is impressive, given lukewarm support from the economic data. Indeed, yield’s trajectory has not been derailed by bouts of weak growth, data and sharp, brief corrections in the stock market that otherwise should have triggered a violent flight into the safety of U.S. Treasury paper, pressing yield lower. 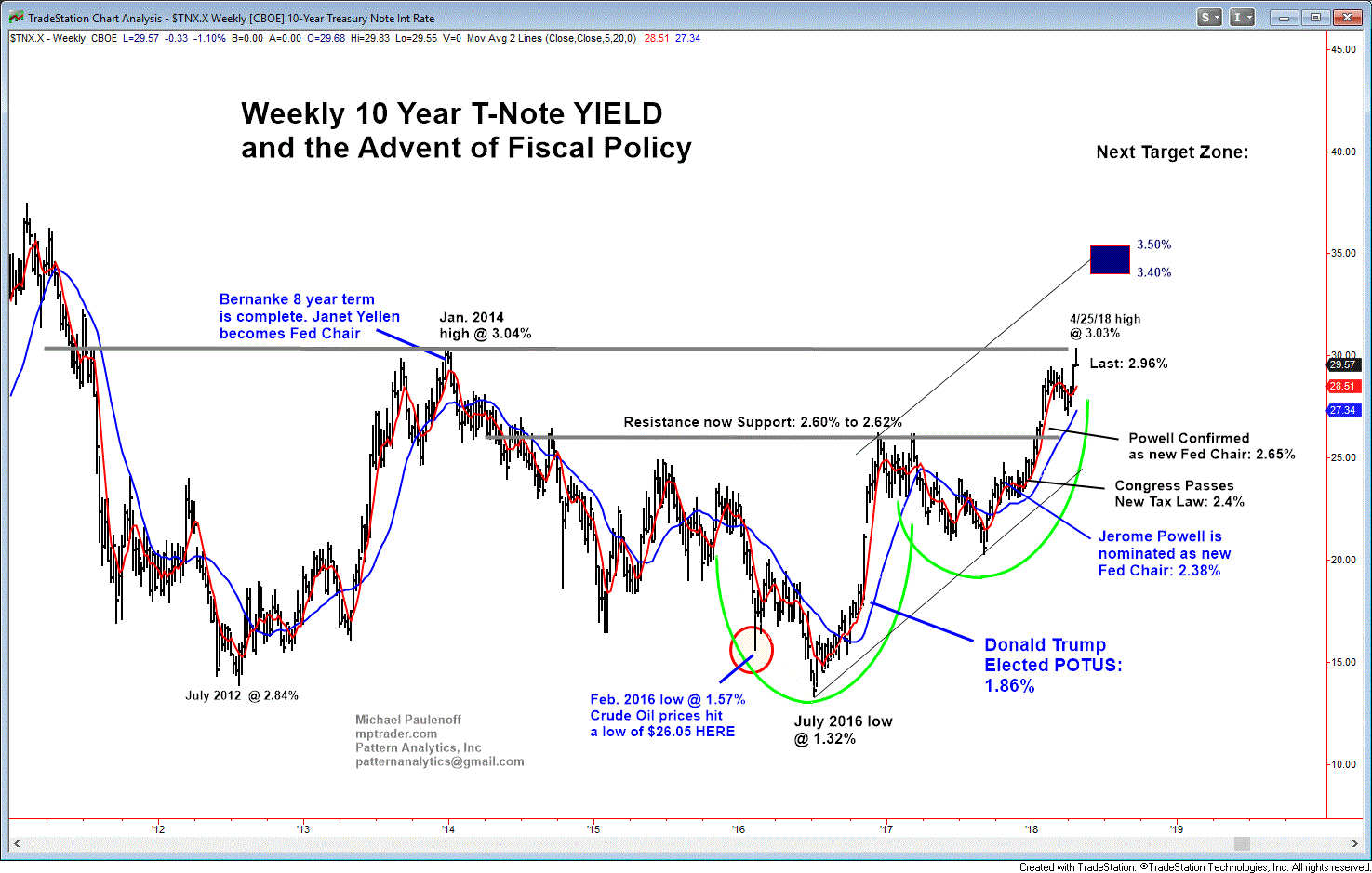 The correlation between oil, home prices, and 10-year yield

Significantly, a potential culprit of rising yield is the rising price of oil. Like bond yields, oil had been climbing steadily despite historic U.S. output and amid modest production cutbacks by OPEC and Russia.

Is it a coincidence that oil and yield are climbing in lockstep? Analysts of the 1970s and 1980s argued that the rising price of oil filtered through the U.S. economy and permeated all goods and services—gasoline prices in particular—pushing general prices higher. Although the connection between the two markets appears very different today, the positive correlation between their rising price patterns is curious nonetheless. 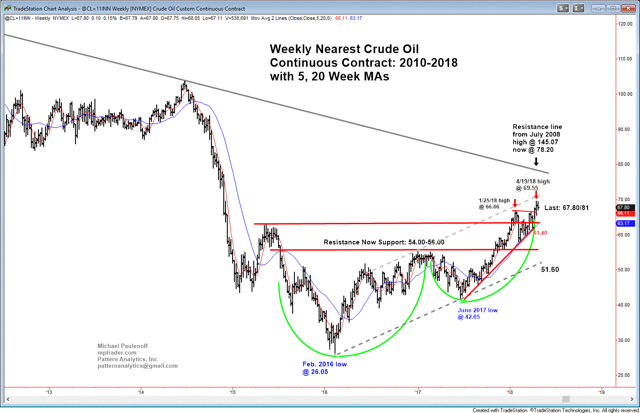 Another curious connection could be seen in housing prices. Housing prices continue their steady, relentless rise from the depths of recession in 2009-2010.

Lately, according to a recent Bloomberg article, not only are prices rising because of scarce supply and growing demand among millennials, there is upward pressure on building materials and costs as well.

As the article comments, “A Labor Department gauge of prices paid at the producer level for construction inputs—everything from particleboard and plumbing to concrete and insulation—was up 5.1% in March (2018) from a year earlier, the biggest annual increase in nearly eight years.”

Need we remind ourselves that a 5.1% increase in construction costs is one-and-one-half times greater than the headline inflation data? 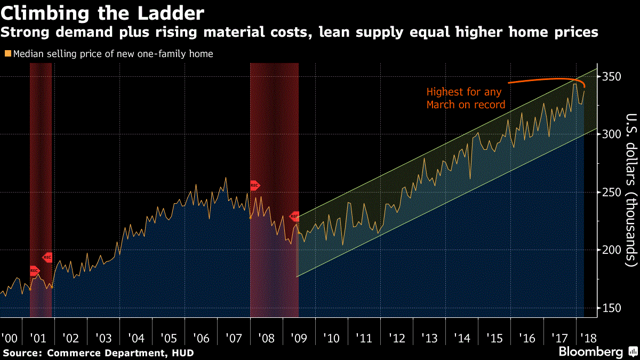 Could it be that the Trump administration’s highly stimulative tax cuts are pushing demand for oil, gasoline, and housing right at the time when a “normal” economic cycle, net of tax stimulus, would be rolling over into slowdown? Hmm, higher prices usually dissuade consumption, unless of course, consumers have additional income and confidence that the economy is strong and getter stronger, no?

Overlay deficit spending by the Trump administration onto the new cost-push inflation and the potential for higher yield ratchets up another notch.

Admittedly, it has only been a few months since the Tax Cuts and Job Act (TCJA) was enacted. But so far, it looks as though 3% growth could remain elusive for a while longer – and so too will evidence that tax receipts will pay for the $1.4 trillion deficit implied by the new law (see Yardeni.com charts below of federal outlays versus receipts, and of the climbing federal debt). 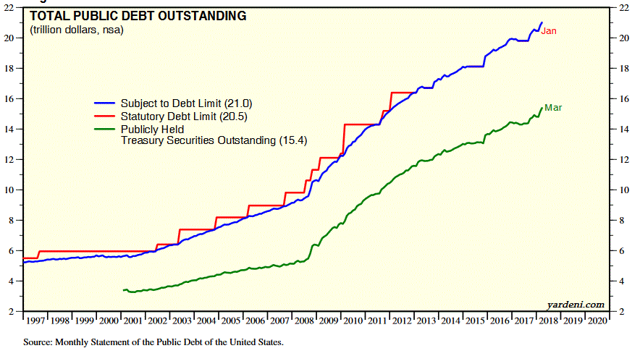 The rise in crude oil, gasoline and housing prices as well as rising deficits, debt and U.S. government spending could be combining to trigger investor unease. It could cause them to demand more risk premium to hold Treasury paper during an unpredictable Trump administration, especially as the November mid-term elections approach.

The more investors think that the Democrats could regain a majority in the Congress, the more unhinged Treasury prices could become.

Under the circumstances, shouldn’t investors demand more of a risk premium to hold U.S. Treasury paper?

Although I am hardly a professionally-trained economist by any means, I am a 30-year-plus analyst, observer, and participant in the financial markets who has spent his career integrating economics, politics, market psychology and price behavior into directional scenarios. Such is the developing scenario regarding the factors governing benchmark 10-year U.S. Treasury yield.

In our MPtrader Model Portfolio, we have been long ProShares UltraShort 20+ Year Treasury ETF (TBT) for the past 11-12 months as a proxy for rising longer term Treasury yield and in anticipation of the yield eruption from the big base formation shown on my monthly chart (above).

See all the charts provided in this article in an expandable format.

Mike Paulenoff is a veteran technical strategist and financial author, and host of MPTrader.com, a live trading room of his market analysis and stock trading alerts.   Sign Up for a Free 15-Day Trial to Mike's Live Trading Room.