Targets for the bears are the minor higher lows in the three-week tight bull channel. The channel began with the July 11 low, which was just above 2770. If the selloff reaches that low, it would be about 80 points, writes Al Brooks Saturday.

I have been writing all week that the Emini would probably pull back for 50 – 100 points over the next two weeks. Friday was the likely start of the pullback. 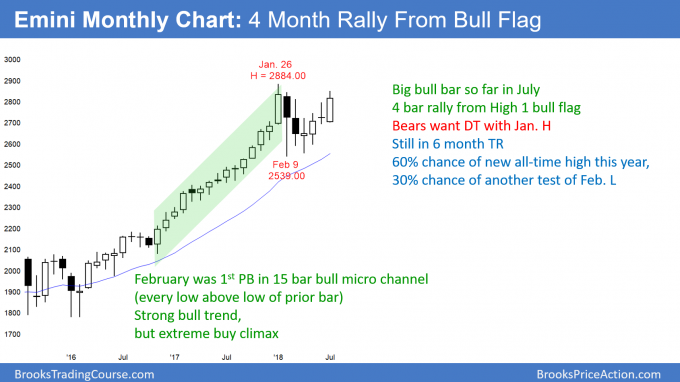 The monthly S&P 500 Emini futures candlestick chart has a strong bull bar so far in July. Since there are only two trading days left to the month, the bar will probably remain strongly bullish.

The monthly S&P 500 Emini futures candlestick chart is in a strong bull trend. January’s buy climax was the most extreme in the 100-year history of the stock market. The four-month rally is now testing the January all-time high. This was the minimum objective for the bulls.

Since the month has a bull body, it is a weak sell signal bar for the bears who want a double top with the January high. However, if August is a bear bar, that would be a more reliable sell signal.

But, the 2017 rally was so strong that any reversal down will be minor until after at least a 1 – 3 month breakout above the January buy climax high. That is what typically happens after strong buy climaxes. Therefore, the odds are that the Emini will reach 3000 – 3200 later this year. 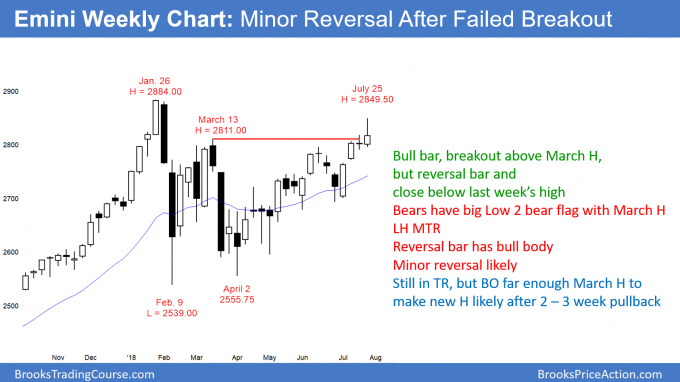 The weekly S&P 500 Emini futures candlestick chart closed below its midpoint this week after breaking above the six-month trading range. It is therefore a sell signal bar for next week.

The bears want this week’s reversal to be the end of a two-legged rally up from the February low. In addition, they see this week as a sell signal bar for a lower high major trend reversal. However, the bull body lowers the probability of a major reversal down.

More likely, the bears will only be able to get a few weeks of selling before the bulls buy again. The break above the March high was far enough above to make higher prices likely, even if there is a 2 – 3 week selloff first. 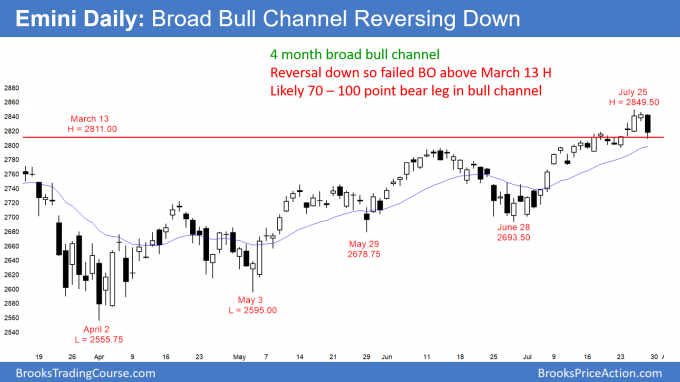 The daily S&P 500 Emini futures candlestick chart has been in a bull trend since the May low. But, Friday’s reversal was strong. In addition, it reversed Wednesday’s strong breakout above the six-month trading range. Finally, the daily chart has been in a tight channel in July, and that is unsustainable. Therefore, the odds are that the Emini will go sideways to down for 2 – 3 weeks.

Can this be the start of a big second leg down, where February was the first leg? The bears at this point have a 30% chance. They would need 2 – 3 consecutive big bear bars closing near their lows before traders will believe that the bears were back in control.

Gloom and Boom
9 hours ago