The odds are that the Emini will trade down for 2 – 3 weeks. I have said that even if the rally continues up to above 3000, there would be swings down along the way. This is probably one of those bear swings, writes Dr. Al Brooks Saturday. 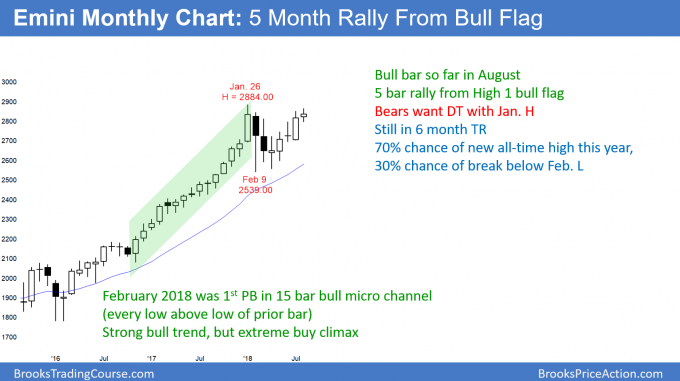 The monthly S&P 500 Emini futures candlestick chart has a doji bar so far for August. The bears want a double top with the January high. They need a strong bear bar in August for a sell signal bar.

The Emini monthly candlestick chart has been in a bull trend for 10 years. February ended the most extreme buy climax in the 100-year history of the stock market. As is usually the case after a strong bull trend, the climax led to a pause and not a bear trend. The bull trend has resumed for the past five months.

The bulls want a breakout above the January high and then a measured move up, based on the height of the 7-month trading range. That target is between 3,000 and 3,200, depending of which highs and lows a trader uses to make the projection.

While the bears want a double top with the January all-time high, they need August to close near its low to create a strong sell signal bar. However, the reversal down would still probably be minor since last year’s rally was so strong.

The bears want a breakout below the February low. That is the neck line of the double top. A measured move down is around 2200. While that would be a 25% correction, a bear trend is unlikely. Instead, it would probably be a bear leg in what would become a trading range for 10 – 20 bars (1 – 2  years). However, it would be a bear trend on the daily chart. 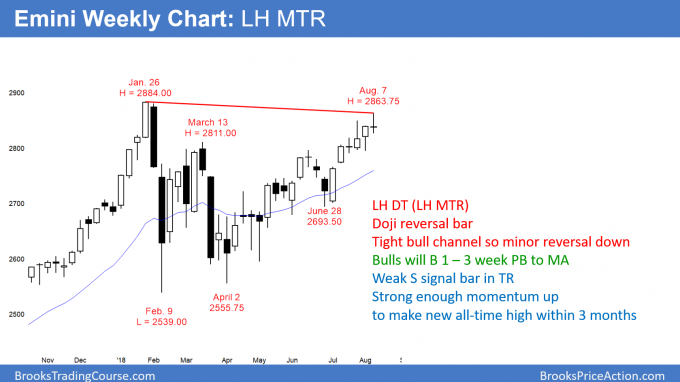 The weekly S&P 500 Emini futures candlestick chart formed a reversal bar last week for a double top with the January high. It is therefore a sell signal bar for this week. Because it is a doji bar and in a tight bull channel, it is a low probability sell signal.

The Emini weekly candlestick chart has rallied since the April double bottom with the February low. The rally was particularly strong for the past six weeks. This was a buy vacuum test of the January all-time high. It got close enough for the bears to create a credible double top. In addition, the rally was in a wedge bull channel.

This week’s reversal bar is now a sell signal bar for next week. But, it is a doji bar and the bull channel is tight. This reduces the chance of a big selloff. The odds are that the Emini will trade down for 2 – 3 weeks. I have said that even if the rally continues up to above 3000, there would be swings down along the way. This is probably one of those bear swings.

I have been writing every week for months that there is still a 30% chance of a break below the February low and a measured move down to 2200. Nothing has changed. The odds favor a minor reversal down, maybe to the start of the July buy climax at around 2700. The deeper the selloff and the bigger the bear bars, the less likely the bulls will make a new high this year. 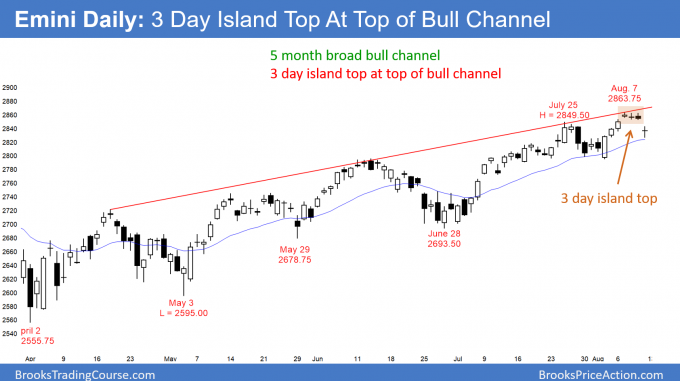 The daily S&P 500 Emini futures candlestick chart had a gap down on Friday. This created a 3-day island top after a 4-day buy climax last week. The first target after a buy climax is the bottom of the buy climax. That is the August 2 low of 2795.

The daily Emini candlestick chart gapped down and sold off strongly for most of Friday from just below the all-time high. In addition, it was at the top of a 5-month bull channel. Even though it closed near the open, the selloff will probably test support below the 20-day EMA. If the selloff is persistent, the next major support is the August 2 buy climax low. Reversals usually have at least two legs down and last 10 or more bars. That is a reasonable minimum goal for the bears.

While the August 2 low is important, it is not as major as the June 28 low of 2693.50. As long as the selloff remains above that low, the daily chart is still in a bull swing in a 7-month trading range. But, if the Emini falls below that low, it would then be either in a bear trend or a bear leg in the 7-month range.

What about a new high this year? Friday’s reversal reduces the chances, but the odds are still 60%. They will fall if the selloff is deep. There is a 40% chance of a test of the February low, and a 30% chance of a big bear break below that low. I have been saying that for months, and it is still true.

How does a double top reversal form?

When a rally approaches a prior high, there are always sellers. The bulls who bought the January high were disappointed by the February selloff. They bought what they thought was a bull trend. Now, they believe they bought what now is the top of a trading range.

Traders want to buy low and sell high in a trading range. Therefore, those bulls want to sell out of their longs if the market allows them to get out around breakeven. This means there are bulls looking to sell up there. That is never a good thing for traders hoping for a strong breakout above the old high. Friday in part was caused by those bulls giving up.

The bears know this, and they, too, sold around the old high and on Friday’s reversal down. This selling by the bulls and bears usually causes the rally to stall. Once it does, traders begin to wonder if there will be a trend reversal down from the double top, rather than just a deep pullback.

Buy The Close rally in January

The January rally was strong enough so that many traders bought the closes of strong bull days. This includes the strong bull trend day on January 26, which was the top of the rally. When traders take a reasonable trade like this, they have an 80% chance of making a profit or at least avoiding a loss if they use wide stops and scale in.

The January 26 Buy The Close bulls were disappointed by February. If they scaled in above either of the big bull bars a couple weeks later, they could have exited at the midpoint of their two buys without a loss.

Since the January rally was so strong, the odds are that the current rally will get all the way up to the January 26 close of 2883.25 before breaking below the 7-month range. If it gets back to that January high close, traders will watch to see if there is a reversal down. If so, they will look to sell, betting that the bulls will give up and then only buy deep selloffs.

Alternatively, if the Emini rallies strongly to above that price without much of a pause, it will then probably continue up the measured move target between 3000 and 3200.