We hold LightPath Technologies (LPTH) starting at $1.40-$1.60 in January 2017 and suggest long-term patience. It’s a cheap stock for the sector but not a penny stock (it is NASDAQ-listed), writes Gene Inger over the weekend.

Their products and relationships with industrial, military, medical and auto industries is novel and expanding with backlogs building steadily.

With assumptions they perform I’ll view recent shuffling as impatient or older shareholders. Perhaps they are frustrated with the time involved to achieve a measurable success, now being replaced by shareholders with patience.

Of course, they too expect to see on-point performance going forward. As this evolves and providing (slightly opaque) guidance is valid, then targets of anywhere from 40%-100% higher over the next year or so are feasible.

Fundamentally the LPTH outlook is favorable.

This was a summary promised for LightPath, which is our speculative pick along with our conservative pick, which was AT&T (T) at the $29-$31 level just after the Time Warner merger. And it is doing just fine at $34 or so now.)

For now, I’ll update LightPath with diverse operations that include telecom and semi-autonomous vehicles. The sectors they cater to are at the helm of technology’s focus now and in the future as well. 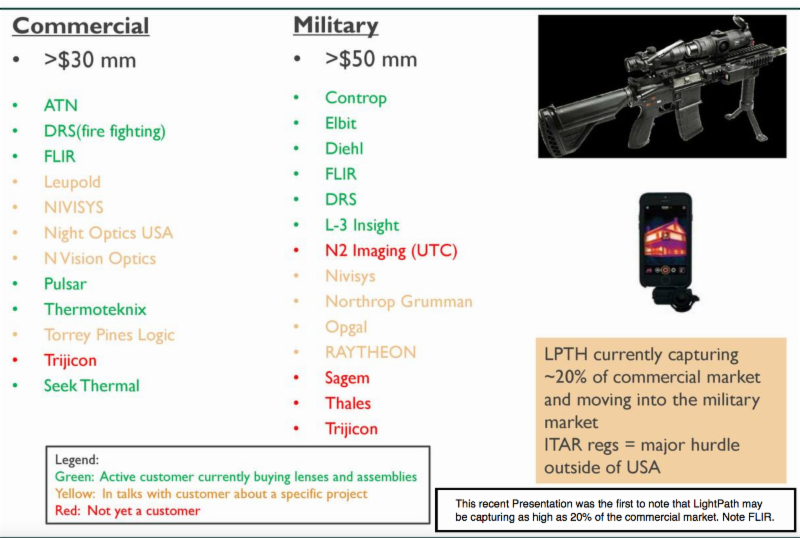 Demand for infrared lenses and modules should continue expanding in years ahead.

LightPath did not provide precise guidance as to the timing of impacts on revenue and earnings. And probably would not have had a slightly poorer fiscal Q4 2018 report than preliminary results, if not for the costs associated with expanding capacity. (No clarification if they have done so swiftly enough to retain customers, though presumably so.)

I speculated that they preferred to see revenues pushed into Q1 2019 which of course we are in now. Whether it takes another quarter or two for them to show meaningful revenue enhancement is hard to say. Although it is clear their order backlog continues to grow substantially. 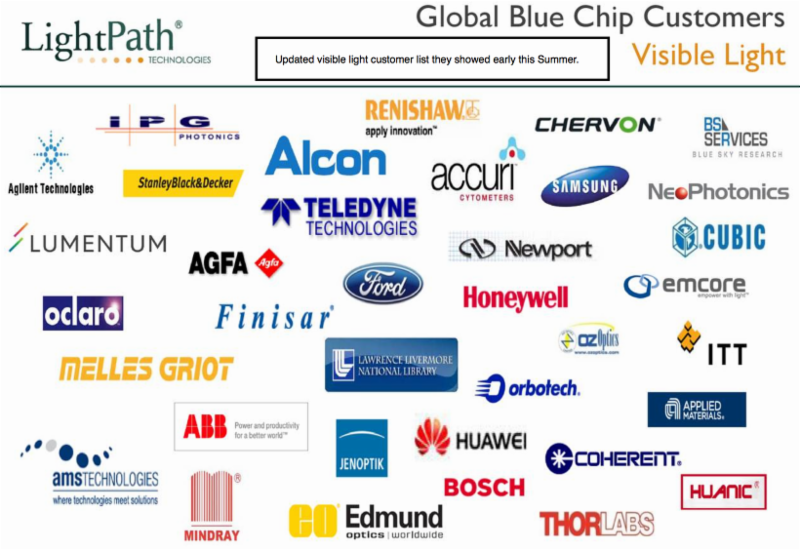 LightPath has indicated that they continue to work with many suppliers of key products (often the most prominent names in their fields).

It’s just hard to tell when they expect this to gel into quantifiable results. Of course, if it were not difficult to extrapolate, I guess it wouldn’t be a $2 stock again.

I remain optimistic that they will enlighten shareholders more as progress is made, not only with new contracts that they tend to announce, but with the consolidation of ISP Optics New York facilities into both Riga, Latvia and Orlando. (I actually asked/suggested that they take advantage of cost efficiencies at a small presentation a few months ago. And they wouldn’t comment then. but did make that move, so clearly I believe that’s a wise decision.) 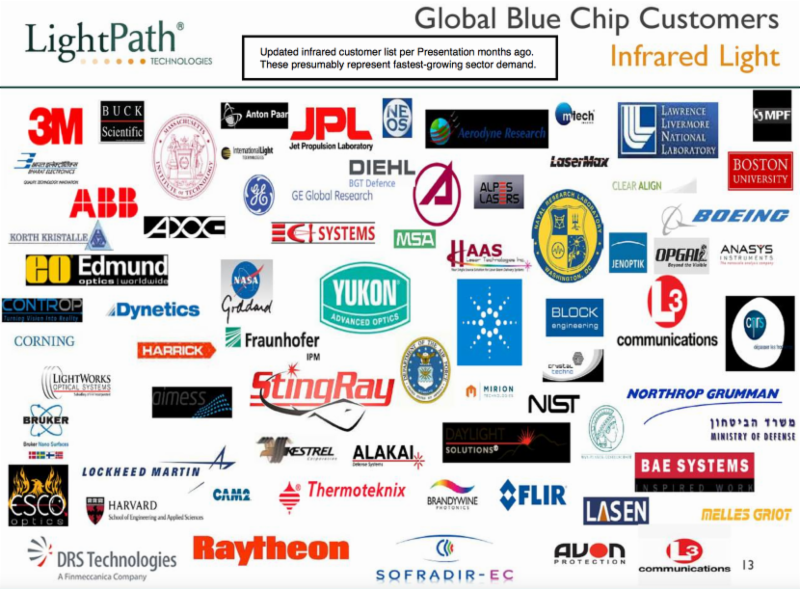 What I don’t want to see is costs of consolidating NY somehow diminishing (or eroding) gains from actual sales of product moving out-the-door this quarter.

And I’d rather not see too much share dilution from offerings or of course executive options, although those are generally on a regular plan. I point out they are past the warrant issue by some time now.

LightPath is trading based on expectations of demand growth for infrared, as well as revival of telecom, which should already be underway given rollout of 5G services globally.

Infrared has been a lower-margin segment, so management intends the transition to domestic materials (BD6 Glass is their trademark), which does not require using content from China.

They also stated they do not have any challenges arising from the tariff issues. (A majority of the Chinese production stays in China for companies there.) I would suggest their end-user customers in China do export especially in industrial (measurement and ranging) gear and perhaps surveillance and security systems.

A couple weeks ago I shared pictures of a new Audi Q8 with their new as well as impressive multi-screen interior (now in the new A6 as well) with a forward-looking infrared night-vision system.

It’s a new example of product evolution. In this case companies like Flir Systems (FLIR) make the gear and they are customers of LightPath (I believe I was using FLIR in Berlin).

The first of these products arrives in the USA in November, just to denote how everything we’ve seen is the tip of the iceberg.

In terms of automotive and in surveillance I believe it’s the early days. (I saw FLIR infrared at CES in Las Vegas years ago.)

In-sum: Almost two years ago LightPath acquired ISP Optics in Latvia. It’s been fully-integrated in terms of sales and marketing. And production from its New York area facilities are being relocated for better efficiencies. CEO Gaynor’sacquisition of ISP was brilliant and transformative, and why we’d looked at this stock for the first time in nearly 20 years.

Their products and relationships with industrial, military, medical and auto industries is novel and expanding with backlogs building steadily. Now of course they need to improve production efficiencies, design more modules (higher margin products recently delved into), and ship on schedule. 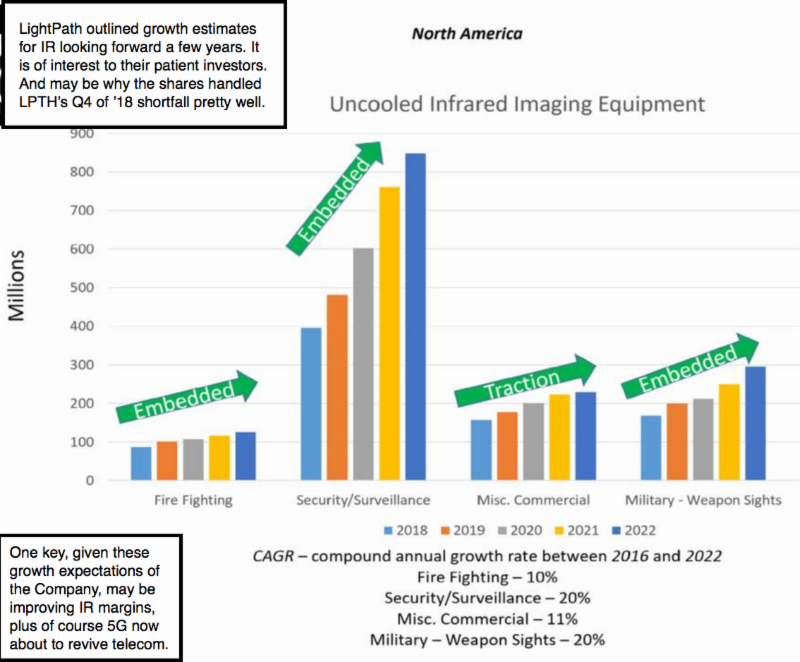 Share performance has been neutral around the $2 level. and it remains at a performance level below their peers in terms of EBITDA ratios.

Growing that at over 50% during fiscal 2019 (if they can do so or more) should very nicely reduce the questions about management’s ability to execute without inertia, in which case Wall Street may finally become aware of this stock in terms of being below-the-radar and with short-and-long term potential.

It’s important that they enhance infrared margins and mitigate any potential earnings inhibitions from tariffs, if that should become a concern. It seems if entire manufacturing and packaging processes for telecom gear sold in China occurs in China. There’s no tariff implication as we glean it so far.

Providing LightPath can hold key customers and expand upon that, they are in solid shape for handling debt and growing. But they need to step-up their game and not just rely on the inherent benefits of the ISP Optics acquisition.

I’m assuming they can do that. I hence view the shares (our speculative pick at a lower price originally) as looking attractively-priced at current levels. If they cannot grow fast enough organically, there is always takeover target possibilities. I suggest they are positioned to do it on their own.