Trade War is on: How Should Fed React?

For decades government policy avoided trade conflicts, so there is not a lot of current data on appropriate Fed policy in such a circumstance, notes Adam Button

As the Mexico episode dims from memory the market is turning towards the Federal Reserve and how it might handle the US-China trade war. Boris Johnson led the first round of ballots for the British Prime Minister race. The Swiss franc, Canadian dollar, silver and gold are the top performers, while the Aussie and New Zealand dollars are the big losers.

While a Federal Reserve rate hike, or hikes, appears to be baked in according the price of Fed funds futures it may not be the appropriate policy in the midst of a trade war. Seeing that the political bias, on both sides of the isle, has been towards free trade for several decades now and there is not a lot of data on what should be the appropriate Fed policy towards current events. 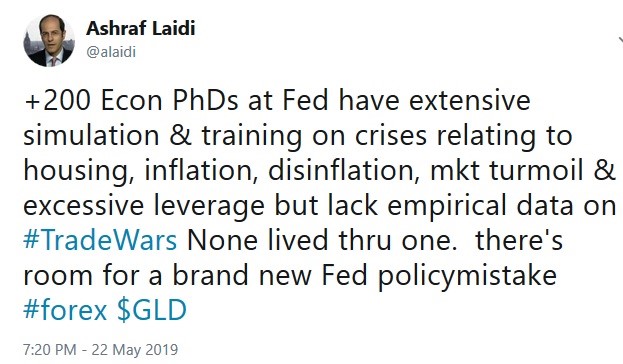 The Federal Reserve is in a tricky situation. An escalation in the US-China trade dispute appears to be coming, but a deal could also materialize quickly. Many market watchers now expect the Fed to signal at next week's meeting that they will cut rates if a trade war erupts but there is a problem with that thinking.

Greg Ip in the Wall Street Journal on Wednesday compared the upcoming meeting to 2003 and the dawn of the U.S.-Iraq war. The Fed was contemplating cutting rates in March but wasn't sure it would break out. Shortly afterwards the bombs started falling and the Fed cut.

On the surface, it's an apt comparison but the problem with a trade war is that there isn't necessarily a clear demarcation on when it will come. Undoubtedly the United States imposing fresh tariffs on the $300 billion of untaxed Chinese goods followed by a response from Beijing would qualify, but what if the steps are smaller. Arguably we're in a trade war already.

What we will look for from the Fed is a better idea of the conditions necessary to cut. Would a small escalation from either side plus a slide in economic data be enough? Probably not, and the market may be underpricing that risk. Markets are fully pricing two rate cuts by end of September.

The important point is that this event is binary in the way a shooting war is and the most-likely outcome is that we remain in the gray area. Until there is clarity, expect heightened volatility, a focus on economic data and a modest risk-off tone. The time lag involved from the start of the tariffs to the economic impact could also worsen the problem of the Fed policy error.

Adam Button is co-owner and managing director of ForexLive.com and a contributor at AshrafLaidi.com

In late October, at the Baron Investment Conference, I listened to Bruce Flatt, CEO of Canadian mone...