The E-mini S&P 500 reversed from a bear trap last week. It should test the top of last week’s sell climax at a minimum. 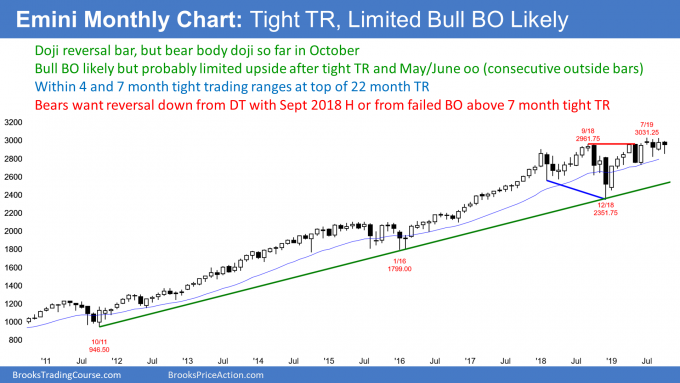 Trading ranges represent an area of agreement. Therefore, breakouts usually do not get far before there is a reversal back into the range.

The bulls hope that the past two years will be like 2014-15. The breakout above that trading range had many consecutive bull bodies. When that happens, the odds favor another leg up.

Will there be a similar breakout this time? Probably not. The past four months have had small bodies and prominent tails. That is not how strong trends usually begin.

Furthermore, I have written many times about the bullish “OO” bull flag (consecutive outside bars) in June and May. May was an outside down bar and then June went outside up. The breakout above an “OO” bull flag usually last at least three months, as this one has. But it typically does not begin a strong leg up. Therefore, if the bull trend resumes from here, the rally will probably fail within a few months.

The E-mini S&P 500 futures reversed up last week on its weekly chart, but the candlestick had a bear body. That is a weak buy signal bar for this week. In addition, it was the third consecutive bear bar and its high is at the top of a four-month range within a 22-month range. That is not a strong context for a big rally (See chart). 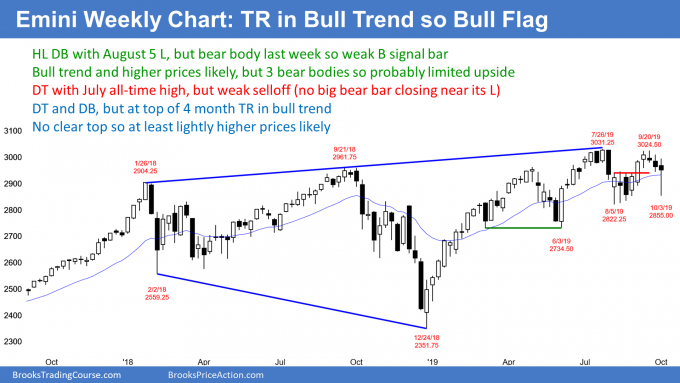 I have been saying since June that there would probably be a new all-time high in September or October. Because of the nested trading ranges, it might take longer.

The past two months now have a lower high double top and a higher low double bottom. Traders now will wonder if there will be one more lower high over the next week or two, which would convert the two-month range into a triangle.

Because the current trading range is also a bull channel after the 2019 strong rally, traders still expect higher prices. But unless the bulls get several consecutive bull bars, the upside breakout will probably not get very far.

The bears see the September lower high as the right shoulder of a Head & Shoulders top. The May lower high is the left shoulder. They hope for a break below the four-month range and then a measured move down to around the Christmas low.

When there is a strong sell signal bar, the bears have a 40% chance of a swing down. However, the sell signal bar three weeks ago was a doji, not a bear bar closing on its low. Also, the entry bar two weeks ago had a small body. Last week was the follow-through bar. While it had a bear body, it closed above its midpoint. It is therefore a reversal bar and a buy signal bar for next week.

As a result of these factors, the bears currently have only a 30% chance of a swing down. Their odds will go up if they can suddenly get one or two big bear bars closing near their lows. Without that, the odds favor a bull breakout. But there might be more sideways trading first.

Strong reversal up from bear trap

The E-mini S&P 500 futures sold off with two big bear bars this past week on the daily chart (see below). However, it also reversed up sharply. Both bull bars had big bodies and closed near their highs. 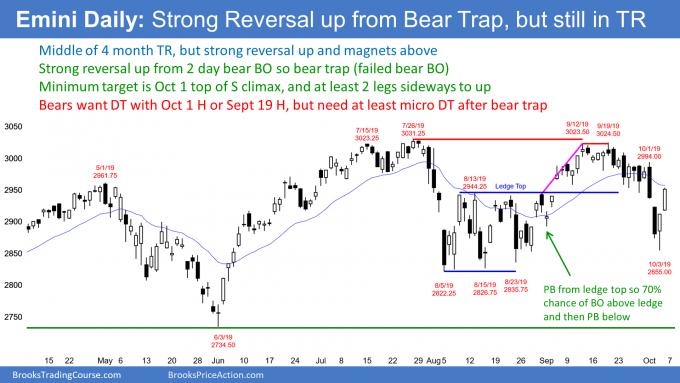 The selloff was therefore a bear trap. A trap typically has at least two legs up. In addition, the reversal usually tests the top of the sell climax, which is the Oct. 1 high of 2994.00. Consequently, the odds favor higher prices over the next week or two. Also, traders expect the first reversal down to last only one to three days. They will buy the pullback. Until then, most bears will not sell until they see at least a micro double top.

Friday closed on its high and back above the top of the August ledge. The E-mini did what it typically does after a wedge top. It breaks out and then pulls back below the top of the ledge. Traders then look for the next pattern.

Because of the bear trap, the odds favor higher prices. But the daily chart has been sideways for four months. It might continue sideways for many more weeks before the bulls get their new high. It is important to understand that the new high is still likely within a month or two.

Is this folklore? There is some reality to it. This month’s reversal up is earlier than what is typical, but it is strong enough to be the likely bottom for at least the next month or two. It could last for many months.